WASHINGTON — The number of Americans seeking unemployment benefits fell slightly last week to 900,000, still a historically high level that points to ongoing job cuts in a raging pandemic.
Jan 21, 2021 6:26 AM By: Canadian Press 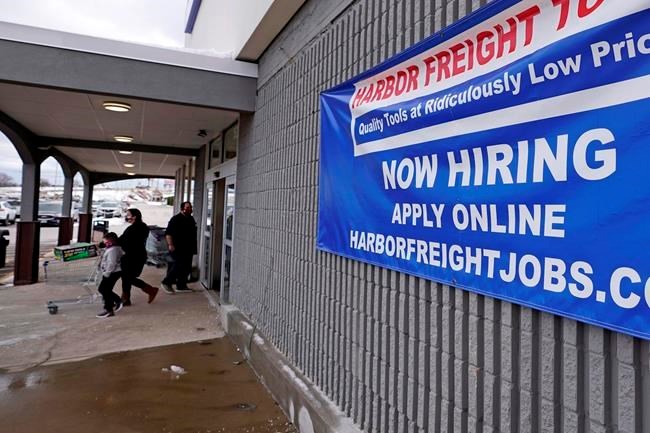 The Labor Department's report Thursday underscored that President Joe Biden has inherited an economy that faltered this winter as virus cases spiked, cold weather restricted dining and federal rescue aid expired. The government said 5.1 million Americans are continuing to receive state jobless benefits, down from 5.2 million in the previous week. That suggests that while some of the unemployed are finding jobs, others are likely using up their state benefits and transitioning to separate extended-benefit programs.

More than 10 million people are receiving aid from those extended programs, which now offer up to 50 weeks of benefits, or from a new program that provides benefits to contractors and the self-employed. All told, nearly 16 million people were on unemployment in the week that ended Jan. 2, the latest period for which data is available.

“Unemployment claims continue to show a job market unable to progress further as long as COVID-19 remains in the driver’s seat," said Daniel Zhao, senior economist at Glassdoor. “While the vaccine offers a light at the end of the tunnel, we’re still far away from a complete reopening of the economy that could drive rehiring and stem further layoffs.”

New viral infections have begun to slow after months of relentless increases, though they remain high and are averaging about 200,000 a day. The number of deaths in the United States from the pandemic that erupted 10 months ago has surpassed 400,000.

Economists say one factor that has likely increased jobless claims in the past two weeks is a government financial aid package that was signed into law in late December. Among other things, it provided a $300-a-week federal unemployment benefit on top of regular state jobless aid. The new benefit, which runs through mid-March, may be encouraging more Americans to apply for aid.

Once vaccines become more widely distributed, economists expect growth to accelerate in the second half of the year as Americans unleash pent-up demand for travel, dining out and visiting movie and concert halls. Such spending should, in theory, boost hiring and start to regain the nearly 10 million jobs lost to the pandemic.

But for now, the economy is losing ground. Retail sales have fallen for three straight months. Restrictions on restaurants, bars and some stores, along with a reluctance of most Americans to shop, travel and eat out, have led to sharp spending cutbacks. Revenue at restaurants and bars plunged 21% in 2020.

The loss of so many jobs has meant hardship for millions of American households. In December, employers cut 140,000 positions, the first loss since April and the sixth straight month in which hiring has weakened. The unemployment rate remained stuck at a still-high 6.7%.

Yet there are signs that the $900 billion federal aid package enacted late last month may have begun to cushion the damage, in large part thanks to $600 checks being sent to most adults. The government began distributing the payments at the end of last month.

Those payments have likely helped drive an increase in spending on debit and credit cards issued by Bank of America, economists at the bank wrote last week. Total card spending jumped 9.7% for the week that ended Jan. 9 compared with a year earlier. That was up from a 2% year-over-year increase before the stimulus payments, Bank of America said.

Last week, Biden unveiled a $1.9 trillion coronavirus plan that would provide, among other things, $1,400 checks for most Americans, which, on top of the $600 checks already being distributed, would bring the total to $2,000 per adult.

The new plan would also make available $400 a week in federal benefits for jobless Americans and extend a moratorium on evictions and foreclosures through September. Biden’s proposal will require congressional approval, and some congressional Republicans have already expressed reservations about its size.