Passengers aboard the first Boeing 737 Max flight in Canadian airspace in nearly two years weren't overly concerned about the plane's safety, saying they trusted that regulators had addressed any issues with the aircraft.
Jan 21, 2021 1:59 PM By: Canadian Press 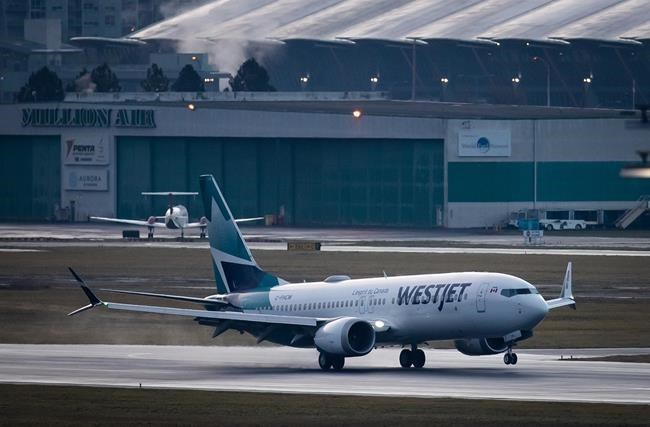 Passengers aboard the first Boeing 737 Max flight in Canadian airspace in nearly two years weren't overly concerned about the plane's safety, saying they trusted that regulators had addressed any issues with the aircraft.

Four people travelling on WestJet’s Thursday morning flight from Calgary to Vancouver said they had no issues boarding the Max, which was grounded worldwide in March 2019 after two deadly crashes that were found to be caused by a faulty sensor.

“It’s interesting to be the first one on it, but I’m not too concerned,” said Chloe Marshall, who wasn’t aware in advance that she would be flying on the aircraft. “I think they have protocol in place and they know what they’re doing, so I just trust the process."

As it returns the aircraft to service, WestJet has sought to ease customers' concerns about the plane by notifying passengers in advance if they are scheduled to fly on a Max and implementing flexible policies for those who wish to rebook on another flight.

Three other passengers on Thursday’s flight to Vancouver said they had been notified of the aircraft type ahead of time. Passenger Lowell Van Zuiden pointed to the lengthy review process in explaining why he had no concerns about boarding.

"I suspect that they’ve probably gone through about as much certification, checking, and everything else as they possibly can, so I’m not worried about that," Van Zuiden said.

After a lengthy review process, Transport Canada cleared the plane to return to Canadian airspace on Wednesday, as long as operators made changes to the design of the aircraft, including allowing pilots to disable an alarm system found to be central to both crashes. Pilots will also have to undergo specialized training in flight simulators.

Upon WestJet flight 115's arrival in Vancouver, WestJet executives held a press conference in which they celebrated the milestone and emphasized the design changes made to the aircraft since it was grounded by Transport Canada in March 2019.

“The return of WestJet’s Max aircraft marks an operational milestone after 22 months of intense review and considerable learning,” WestJet president and CEO Ed Sims said during the press conference.

“While of course this is a very different operating environment than any of us would wish due to COVID-19, we use today as a milestone to look forward to days ahead when all 13 of our Boeing Max 8 aircraft are once again connecting Canadians across the length and breadth of our wonderful country," Sims said.

WestJet will offer additional flexibility in its change and cancellation policies to customers scheduled to fly on the Max, with different conditions depending on how far in advance a passenger wants to change the itinerary.

The policies granting extra flexibility will be applicable until Feb. 28, the website says, but a WestJet spokeswoman said the company has no plans to change or remove the policies after that date.

On its website, WestJet says passengers booked on a Max who are looking to change their flight more than a day from departure can book on a different flight within 24 hours of the original flight at no additional cost. They can also book on a flight outside the 24-hour window with no change fee.

Passengers will be able to cancel their trip until one day before the flight to receive a travel credit.

The airline does not address fees for passengers looking to change flights less than a day in advance, but invites them to contact the airline to manage the booking.

Robert Kokonis, president of Toronto-based consulting firm AirTrav Inc., said WestJet's decision to offer flexible change and cancellation policies reflects the pressure airlines face in encouraging people to fly amid the business challenges of COVID-19 -- including waiving fees that would otherwise give them additional revenue.

“For the carriers, it’s a double-edged sword to a certain degree,” Kokonis said. "Airlines need to attract whatever remaining business there is."

Air Canada is expected to follow WestJet in returning the Max to commercial service on Feb. 1. Sunwing, which also flies the Max, has not yet announced when it plans to return the plane to service.

Like WestJet, Air Canada plans to give passengers booked on a Max special options for changes to their trip, including the option of changing their flight at no extra charge.

Carriers in the U.S. that have started flying the Max have rolled out similar policies, including announcing the type of aircraft during boarding, in an effort to be transparent with passengers.

-- With files from Dan Healing in Calgary.

This report by The Canadian Press was first published Jan. 21, 2021.

Note to readers: This is a corrected story. An earlier version incorrectly stated the number of Max 8 aircraft in comments from WestJet CEO Ed Sims.