Last season, the Royal City association team won the under-15 B.C. title after losing in the Coastal Cup soccer final
Apr 29, 2014 11:08 AM By: Tom Berridge 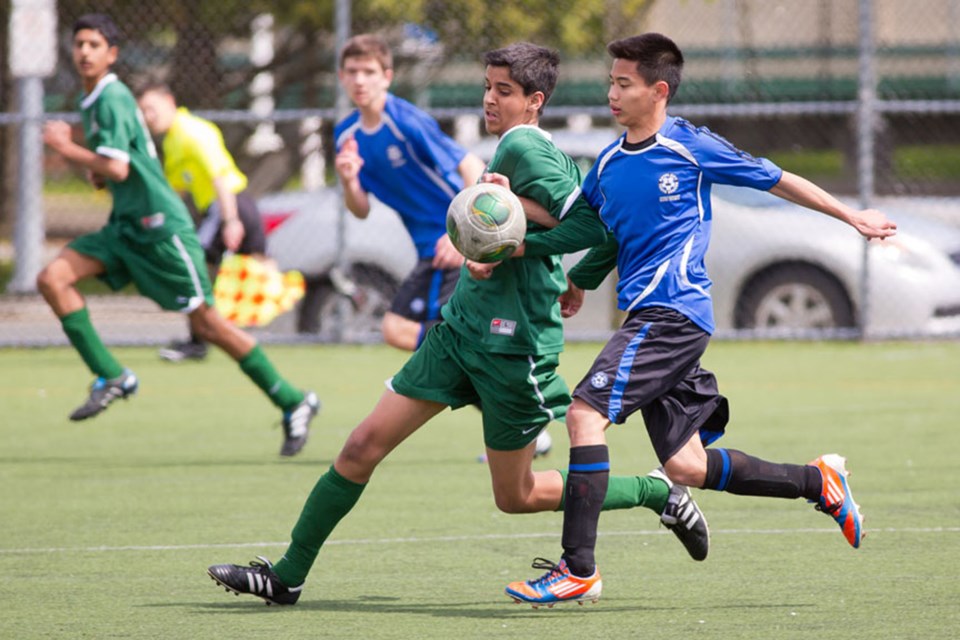 The under-16 Royal City gold-level soccer team won a silver medal following a 2-0 loss to Ladner Celtic in the B final of the B.C. Soccer Coastal Cup championships in Richmond last weekend.

West U had sailed through the cup playdowns, advancing to the next levels with two-goal wins in its three earlier matches, including a 3-1 victory over Surrey Pegasus in the semifinals two weeks ago that secured a spot in the upcoming Provincial Cup tournament this summer.

But under strong winds and playing without a couple of injured players, the New Westminster club were put mostly on the defensive against the attacking Celtic side.

But there is an upside to the loss. Last season, Westminster Utd. was put in a similar situation after losing the B final to Killarney at the 2013 Coastal Cup but came back to win the Les Sinnott trophy at the B.C. championships later in the year.

“You can’t win them all, and this is the one to lose,” said United coach Ed Zacharuk. “We lost to Killarney and then went on to win at the provincials. As long as we have a similar fate, I don’t care.”

Westminster was under pressure from the opening kickoff, but solid goalkeeping by Matt Buchanan kept the Ladner club off the scoresheet until midway through the second half.

Buchanan made a tough save in the opening half, steering a hard shot past the near post.

New West’s Dusan Dirda had a glorious opportunity go wanting just before halftime, one-timing a long pass upfield from Markus Zacharuk off the Ladner crossbar just before the interval.

Buchanan also palmed another ball wide of the goal in the latter period before Ladner’s Josh Murphy finally connected on his first of two goals for the Celtic.

Murphy’s second marker was unfortunate for Buchanan, who made a great save off a hard shot from in close but had little chance on the ensuing rebound.

“We still know the provincial championships are the main goal this season,” said Buchanan. “(Ladner) got to every ball first. I think we could have come out of the gate with more energy.

“But from last year, we learned this game doesn’t really matter because we eventually won (the B.C.s). We were also missing a couple of midfielders.”