Making the most of the good weather, family genetics and a lot of hard work, New Westminster’s Ben Tjernagel capped his high school track and field career with shiny hardware on the weekend in Langley.
Jun 8, 2017 2:35 PM By: Dan Olson 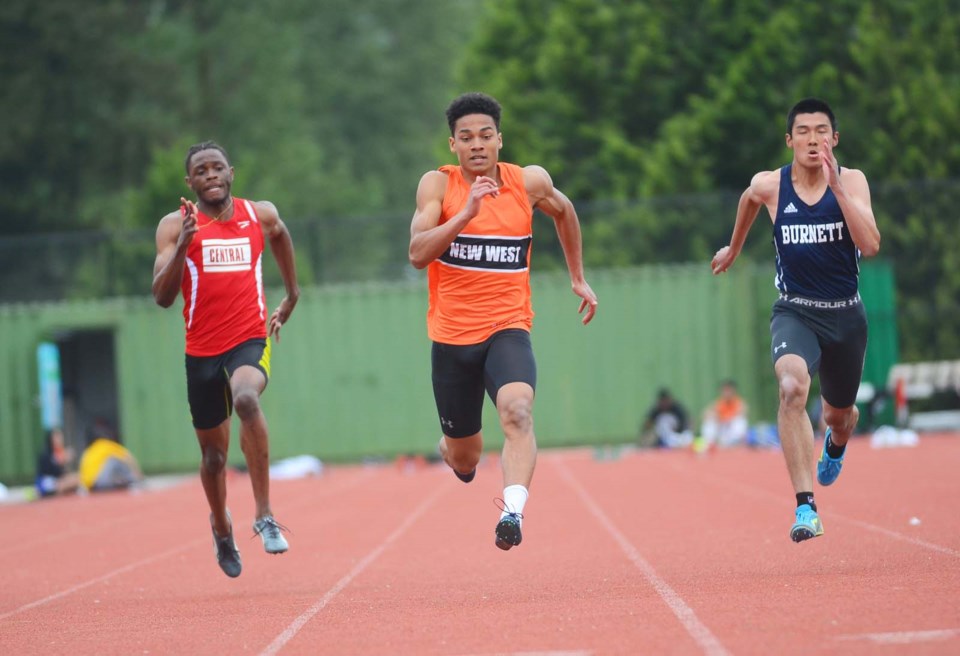 Making the most of the good weather, family genetics and a lot of hard work, New Westminster’s Ben Tjernagel capped his high school track and field career with shiny hardware on the weekend in Langley.
As part of an invigorated Hyacks squad, Tjernagel proved to be a good standard bearer, winning the senior boys 200-metre on Saturday while picking up silver in the 100m on Friday.
His 200m win, done in a time of 21.86 seconds, edged out defending champion Quinn Litherland of St. George’s, who finished in 21.95.

"I just had to relax," Tjernagel told the Record. "(Litherland) is a great athlete and in the past years he's always beaten me. It felt good to come out ahead."

While much attention is put on the 100m, Tjernagel said he was able to put the second-place finish behind him and that helped put him in the proper mindset for a gold-medal run.

"I tried to relax, because I usually put too much stress on myself. This time I told myself to stay focused. ... I usually do better in the 100, so the 200 I surprised myself."

That both results were new personal bests also framed a satisfying weekend.
New West track coach Bryan MacMaster said the disappointment of the previous day didn’t get in the way of a great run in the 200m.
“He was pretty happy with that (200m) run,” said MacMaster. “I think he was disappointed in finished second (in the 100m), where he was gaining but just didn’t gain enough in the end.”
That race was nearly a photo finish, with Vancouver College’s Annstas Eliopoulos taking the gold with a time of 10.81; Tjernagel’s time was 10.82.
His previous best in the 100m was 11.09, set last year. In the 200m event, Tjernagel eclipsed last year's top time of 22.59.

He credits an earlier start to training -- starting soon after the high school football season ended in December -- for the boost in his performances.

"I think a lot of it is to fitness," Tjernagel said. "In Grade 11 I didn't start training hard until March; this year I got going in December. ... I found football has really helped me push myself and taught me how to compete harder."

As part of the 4x100 relay team, he helped pace them to third place, but they were disqualified due to a hand-off.

"That was tough. We all ran a good race and we were happy with our time, but it happens."

Tjernagel, who will attend and compete for Trinity Western University in the fall, is the second family member to shine at the B.C. High School Track and Field championships, after his older sister Raquel racked up three golds in the 100- and 200m senior girls events between 2013 and 2014. She’s currently attending the University of Texas on an athletic scholarship.
Distance runner Grace Fetherstonhaugh brought home three medals, including gold in the senior girls 1500m steeplechase.
The Grade 11 runner completed the event in 4:54.81, nearly 10 seconds quicker than Riverside’s Olivia Willett.
According to MacMaster, Fetherstonhaugh’s steeplechase win was a personal best to boot.
“She broke the record and got the gold,” said the coach. “It’s such a gruelling event, but she worked so hard for it.”
Fetherstonhaugh, last year’s B.C. junior 1500m steeplechase and 3000m champion, also collected bronze in both the senior girls 1500- and 3000m events.
In the 1500m race, the teen was three seconds back of first with a time of 4:32.80, while in the 3000m she trailed Desirae Ridenour of Cowichan by nearly six seconds, with a time of 9:51.03.
Jeremy Belcher’s junior boys’ triple jump mark of 12.17m was a strong silver, behind Cole Brandsma of Abbotsford’s 12.94 jump.
The Hyacks also got bronze medals from junior Lauryn Savela, who recorded a javelin throw of 37m, and junior boys’ Max Jones, who placed third in the pole vault with a PB clearance of 3.40m.
Placing fifth in senior girls’ javelin was Brianna Bates, with a PB of 39.47m; Emily Chilton finished sixth in the 400m; and Matthew Dielly-Sturrock placed seventh in senior boys hammerthrow.