Former St. Thomas More Knight Jon Cornish will be given the Best of B.C. award at the annual Sport B.C. Athlete of the Year banquet on March 5.
Feb 18, 2014 4:32 PM By: For Burnaby Now 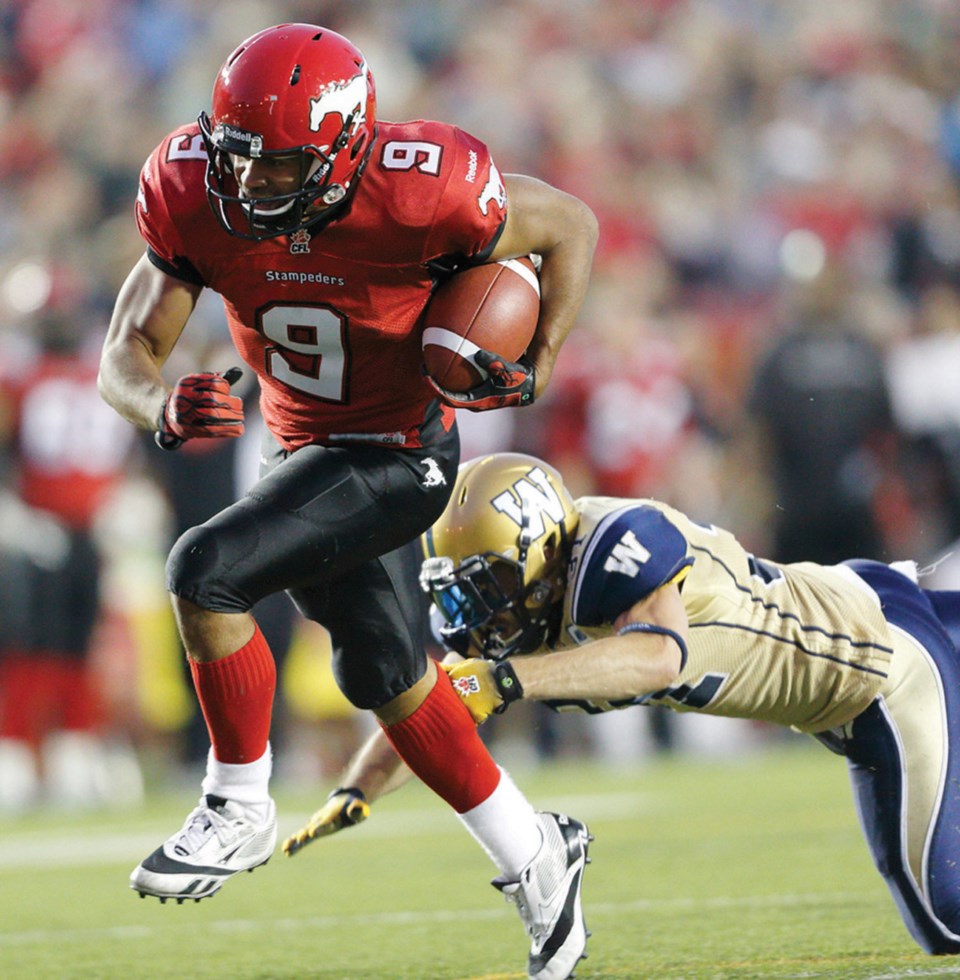 Jon Cornish, the starting running back for the Calgary Stampeders of the Canadian Football League, was named the recipient of the Best of B.C. award by Sport B.C.

The award will be handed out at the 48th annual Athlete of the Year awards ceremony and gala dinner, set for March 5, 2014 at the Fairmont Hotel Vancouver.

had a wide field of accomplished athletes to consider, when choosing this year’s Best of BC award recipient,” notes Sport B.C.’s President & CEO, Rob Newman.  “This award recognizes B.C.’s top amateur or professional athlete for 2013 and Jon Cornish is certainly deserving of this award after a record-breaking season with the Calgary Stampeders.”

Cornish was born in New Westminster and played his high school football at Saint Thomas More Collegiate in Burnaby.

He played college football at the University of Kansas, where he set the program’s single-season rushing record with 1,457 yards, and was selected first team All-Big XII in his senior year. During his collegiate career, Cornish was also selected team offensive MVP in both his junior and senior years. He was drafted by Calgary 13th overall in the 2006 CFL draft.

Professionally, after taking over the starting duties from Calgary's all-time leading rusher Joffrey Reynolds midway through 2011, Cornish rushed for 611 yards in the final seven games of the season, averaging 7.7 yards per carry.

In the Stampeders only 2011 playoff game versus the Edmonton Eskimos, he ran for 128 yards and a touchdown, while averaging 9.2 yards per carry. Those eight games were enough to garner him the 2011 Calgary Booster Club Male Athlete of the Year award and a CFL West All-star.

In his first full year as a starter, Cornish led the CFL in rushing with 1,457 rushing yards on the ground, breaking Normie Kwong’s 56-year-old single-season rushing record for Canadians.

The running back bettered this in 2013, rushing for 1,813 yards to lead the CFL and win both the Most

Outstanding Canadian award and the CFL’s Most Outstanding Player. He is the first Canadian to win the award in 35 years in the American-dominated league.

In December 2013, Cornish was awarded the 72nd Lou Marsh Trophy as Canada's top athlete, amateur or professional, male or female, for 2013, narrowly defeating tennis player Milos Raonic and bobsledder Kaillie Humphries. He is the first CFL player to win the Lou Marsh since 1969 when Russ Jackson won.

This year’s event, hosted by CBC’s Scott Russell, is expected to sell out so don’t be disappointed and

order your tickets today at https://www.eply.com/AthleteoftheYear2014.

Former Canuck Ryan Kesler opens up about the problem of painkillers in the NHL in TSN report
Sep 25, 2020 9:55 AM
Comments

17581
Pfizer temporarily reduces European deliveries of vaccine
1167
Filming in New West: A bright spot in a challenging year
435
New West athlete remembered for her zest for life
215
UPDATE: Here's where you could be able to buy cannabis in New West
186
Keep those gloves handy: Environment Canada updates winter forecast for Vancouver