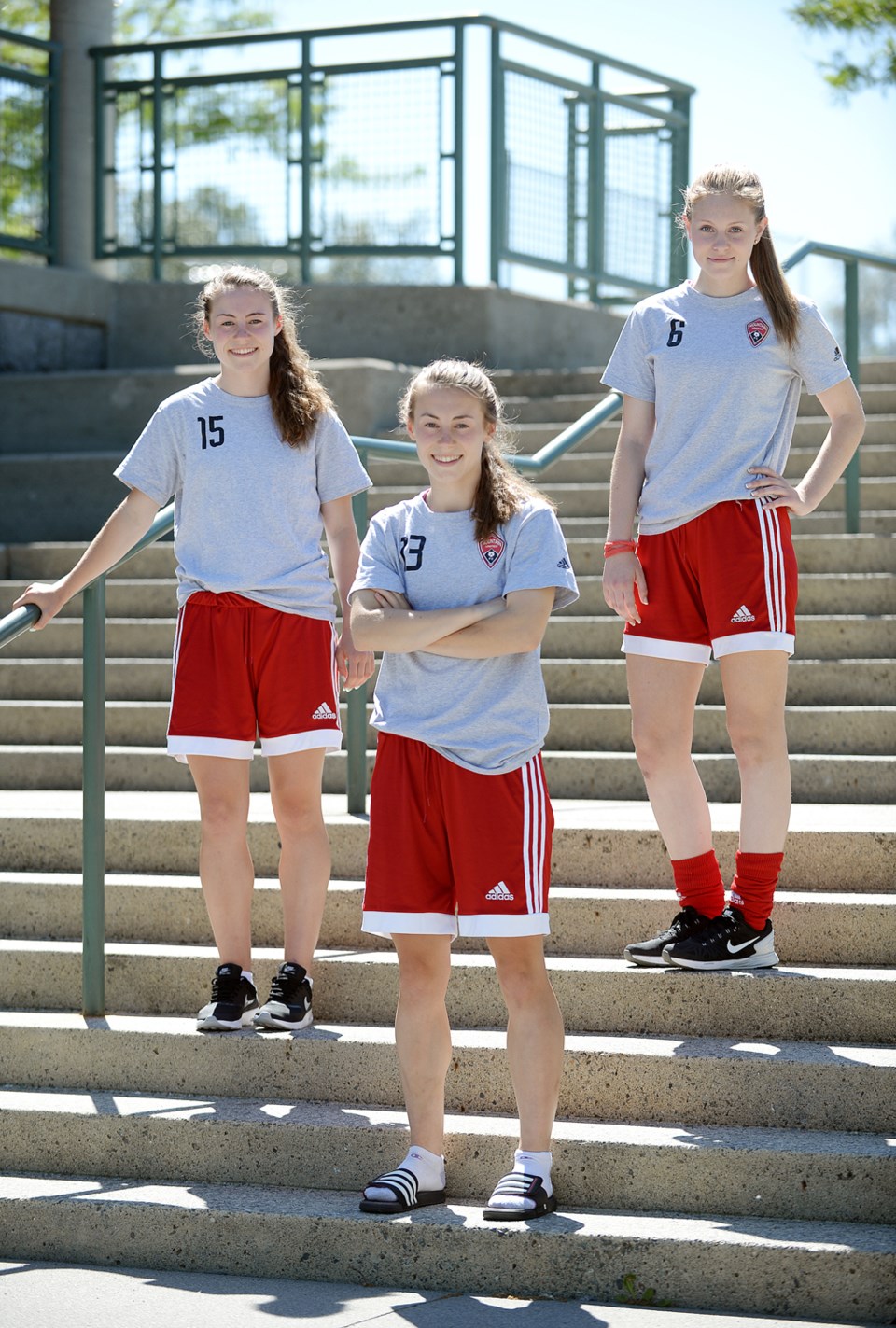 Christina Dickson, left, Allyson Dickson, centre, and Teagan McManus have been playing soccer together in Burnaby since they were nine years old.Jennifer Gauthier

Three soccer-playing friends won’t have to say any goodbyes following graduation this year.

Mountain United FC teammates Teagan McManus and twins Allyson and Christina Dickson will be closer than ever next season, when they team up for their freshman seasons with the Simon Fraser University varsity women’s soccer team in September.

McManus, a Burnaby Mountain grad, and the Dicksons from Burnaby North have been playing soccer in Burnaby since the age of five, and together as early as nine years old.

As younger gold-level players, they used to be a back line together. But as time went on, McManus became more relied upon on defence, while the two sisters were moved forward, with Allyson in the midfield and Christina up front.

In fact, the friends have played all over the pitch at one time or another – Christina even played in goal at one time.

“Our team choked in earlier finals – a mental block,” said McManus. “This season, we’ve had an unbelievable season. We’ve achieved our goals and won that trophy, OK, we did it.”

All three come with a pedigree.

McManus has spent time in the Canadian National Training Centre and has been a member of the provincial team program from 2010 to ’13.

Christina played with the B.C. under-16 team and has been singled out for a Mountain United player of distinction award.

Allyson was named the MVP in Mountain’s recent Premier Cup win, was the winner of the golden boot for North in the B.C. high school girls’ provincial soccer championships in 2014 and this year graduated as a three-time athlete of the year.

Off the field, the three are all honour roll students, as well, and planning to take similar studies into their post-secondary careers in psychology and criminology.

But the thought of actually being in the same class one day “seemed a little weird” to Christina.

Back in elementary school together, they used to stagger themselves into different heats when competing in running races, so that they never had to compete against each other.

“We did it because we didn’t want to come second. We wanted to win,” they said.

And winners are exactly what SFU is going get, when the three join the varsity squad later this year.

“Allyson plays with a lot of heart, she is tenacious and she competes with great intensity,” said second-year SFU head coach Annie Hamel, in a Clan press release.

“Christina is our most versatile incoming player,” said Hamel in the release. “She can be a shutdown defender or a reliable goal scorer. Her grit and willingness to sacrifice her body exemplifies true passion for the game.”

“Teagan is a player with unparalleled work ethic and unlimited potential. She … provides an attacking threat from the back line,” Hamel added.

The incoming Clan freshmen know they have a challenge ahead. SFU won just three Great Northwest conference matches over the past two seasons.

But all three like the idea of stepping up to a challenge and building on a new foundation.

“Personally, I like an intense atmosphere to go in and work hard – relate it to a game and how to improve,” said McManus. “I just want to be pushed to the limit.”

“It’s great to be a part of it – a rising of the program,” Allyson said. “We’ll be the underdog, but in the next two years there will be a really big difference in the results.”

The friends also agree that winning a championship for the Burnaby Mountain school is why they are headed there.

“To map out a program that will make future players want to come to SFU, to talk about and not overlook.”

“It’s that willingness to compete that makes the difference,” Christina added.

And after the four years of varsity eligibility are up, the three insist that soccer will continue to be their bond into the future.

“We’re trying to keep it that way. It’s worked out pretty well for us so far.”