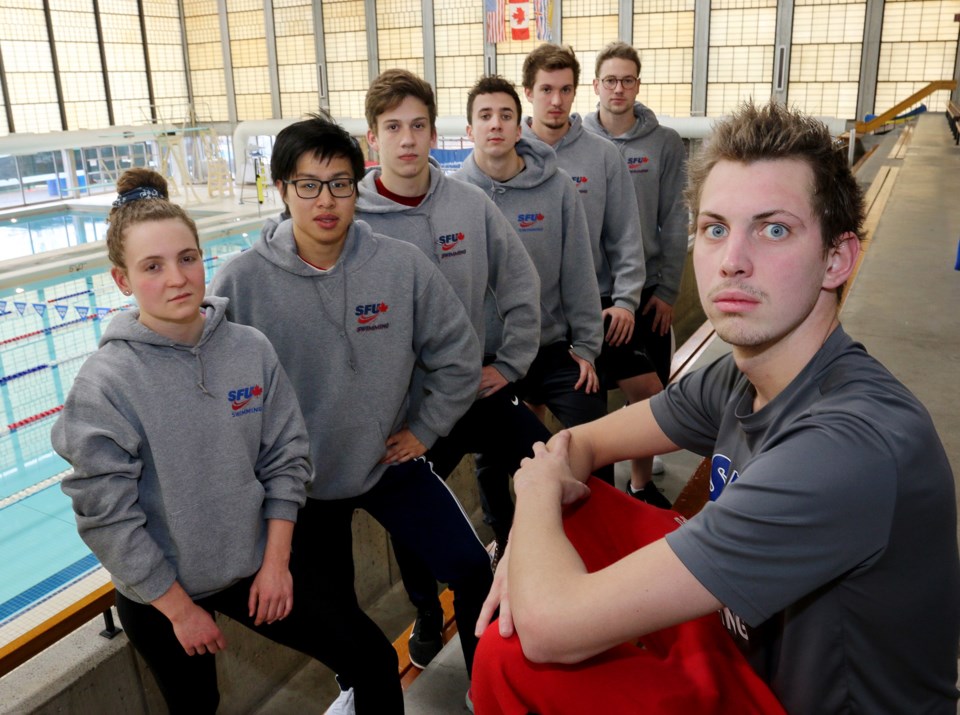 Simon Fraser University swim team captain Andrew Woinoski, at right, is speaking out on behalf of the team about how recent changes made by the sports administration have impacted the squad, including putting head coach Liam Donnelly on a unspecific period of leave. He’s joined by Lauren Diehl, Channah Yip, Collyn Gagne, Rafik Jiwa, Alex Woinoski and Leo Faith.Mario Bartel/TriCity News

Members of Simon Fraser University’s swim team have few qualms about the early hours and heavy schedule they signed up for, including 20-plus hours a week training in the water for the major meets on the NCAA calendar.

Reaching their potential and trying their best are part of their DNA. What also unites them is the knowledge of what a great coach can bring to their efforts – making their current situation all the more frustrating.

For the second straight year, the SFU program is heading into the crucial part of its schedule without a head coach due to an unannounced leave of absence. With so many questions unanswered, swimmers Andrew Woinoski and Collyn Gagne are asking on behalf of the team for some support – and preferably the return of their coach.

Longtime coach Liam Donnelly left the program at the beginning of January on what was described as an administrative leave. Swimmers were told then, as before, that the reasons for the leave were between employer and employee, and the coaching duties would be assumed by part time assistant coaches Maxime Marechal-McCoy and Dylan Roguski.

“It’s very unlike Liam, because he’s been dedicated to this team for years,” remarked Woinoski, a fourth-year athlete. “The years before I arrived he had never taken a leave, never stopped doing what he’s been doing year-round. … We’ve talked to the student union society and we’ve talked to (Student-Athlete Services), the student athletic body, and pretty much got a reply that they kind of wanted to help, they understand, but are maybe afraid to represent us.”

Donnelly has been coaching on Burnaby Mountain since 1991, taking over SFU’s head coaching duties a year later. His record has resulted in 15 collegiate national team titles, 143 individual national titles and 62 Div. 2 national records with Canada's only program competing on the NCAA circuit.

With the administration providing little information to the athletes, the present and future of the program seems to be on the line.

He noted the last meeting he had with SFU athletics and recreation senior director Theresa Hanson was last summer, and it didn't end well. Since then, besides when she announced Donnelly would be on leave last month, there has been little information offered.

It’s actually the third time in four years that Donnelly has been put on leave. Four years ago, swimmers, gathering for their daily practice, found the doors locked and were unable to contact their coach. The first leave lasted five months, with then-assistant coach Cory Beatt taking over.

Donnelly resumed his full-time coaching duties in 2017-18, but a year later was again removed for three weeks, including the run-up to nationals and trials. Ranked second entering the NCAA Div. 2 nationals, SFU recorded its best-ever finish, ninth overall. However, that fell short of what they felt they could have achieved.

“Lot of people were really disappointed because for some of them it was their last meet, some were looking at qualifying for worlds. The change of coaches was big. It sounds maybe not like a big deal, but the change includes training, scheduling, strategy in a big way,” said Woinoski.

This time, as in the first, the 36-member team has been given no specific end-date as to when the coach may return.

The NOW reached out to Donnelly by email for comment, but he declined: “Sorry but I really can’t provide a comment at this point. Thanks for understanding.”

SFU's athletic and recreation department responded to the NOW's queries after the initial story appeared, with a statement.

"Provincial privacy legislation prevents us from discussing questions that relate to employment information. What I can say is that we care deeply about the well-being and collective success of our student-athletes. A coach’s absence can happen for a variety of reasons, and the timing is sometimes not ideal. When a head coach is away, we do our best to provide continuity by substituting coaches with whom our students are familiar. Often, a full-time assistant coach will fulfill the head coach role in these instances. When coaches are away, we communicate with our athletes about such absences and adopt fulsome plans to support the athletes during that time," Hanson said in the email.

While they understand that they may not have a right to know the reasons behind the leaves, Woinoski and Gagne said it’s the fact that the recent absences came without warning and left them to prepare for NCAA championships and national qualifying events without critical support that hurts the most. This year, Gagne has a shot of making Canada’s 2020 Tokyo Olympic team.

“Collyn is probably a little scared to mention this, but he probably has a very good shot at Olympics this year. Last year he finished second at the trials in 400-metre (individual medley); if he repeats that again this year he’d be just one place away from making the Olympics. If he’s under the FINA ‘A’ cut, then he would qualify,” noted Woinoski.

“(Donnelly’s) a hard worker, and he really cares about us. He definitely does, and he helped me take off a lot of time and helped me get to where I am now,” added Gagne, a third-year student who was recruited by Donnelly from Oakville, Ont.

They’re both appreciative for the hard work and extra time coaches Marechal-McCoy and Roguski have put in to pick up the slack. Woinoski said the two are also in a tough situation.

Woinoski said he feels uncomfortable also as the program attempts to recruit new swimmers for next year. Typically, the team leaders would help sell the benefits of the program, but he said he's tied between staying silent or unveiling the challenges the team has faced over the years. He knows some members are weighing their options, as well.

“People are looking at other universities now, which is sad to say. They don’t know what is happening. It makes me sad and upset because I’ve put in so much time with the team. We have recruits coming in who are ranked really high; I haven’t really talked to them. I’m worried to because I don’t want them to know what’s happening. I want them to come, but personally if I was coming from Ontario or somewhere I’d be like, ‘is it worth it?'," he said.

However, Woinoski said, the frustrations he and his teammates were feeling over the situation created a need to go public.

The recent leaves coincide with the administration’s decisions to reduce the traditional pre-season training camps, along with cutting the summer pool hours for the private Simon Fraser Aquatics club. SFA is where local SFU swimmers maintain their training during the off-season.

The summer club paid for the privilege, but is now renting time at other local pools, like Burnaby’s CG Brown, Central Park and Kensington, and the Tri-Cities’ Hyde Creek and CCAC facilities.

“We’ve gotten along with less money and still had a world-class program. We just want (the coach) to choose how the team works,” Woinoski said.

Without Donnelly, Gagne believes the team is less prepared than it could be. His best results have come with the SFU coach on the deck, building a concise training program while providing valuable support; those are the reasons he wants the coach back.

“Having him for the preparation leading up to those meets for me is really important, as he knows us. I’ve dealt with him three times going into a big competition,” said Gagne.

“This is why I’m so passionate to get the coach back, because he helped me get to the national team, the world university championships, and he took money from his professional development to go there and help me prepare for the meet.”