Ground game and disciple proved to be the ying and yang of the New Westminster Hyacks on Friday. Fortunately, the local crew got enough of the first to make the latter less painful.
Oct 29, 2019 1:26 PM By: Dan Olson 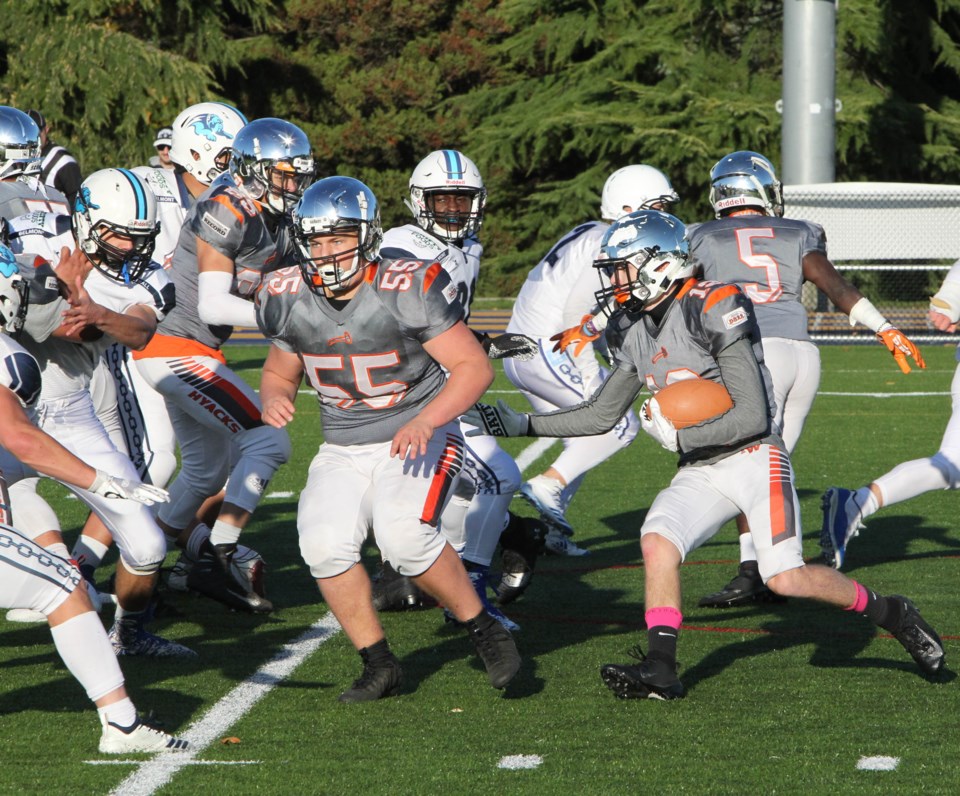 Ground game and disciple proved to be the ying and yang of the New Westminster Hyacks on Friday.

Fortunately, the local crew got enough of the first to make the latter less painful.

New West rallied in the second half to stop a persistent Belmont Bulldogs 46-33 at Mercer Stadium.

Trailing 27-24 after the Island squad put back-to-back majors on the board late in the second quarter, the Hyacks rolled ahead on a pair of big Michael Udoh runs of 23- and 38 yards, padded with two Greyson Planinsic conversions in the third quarter.

Udoh would add a third touchdown, after Belmont pulled within seven points in the fourth frame, to round out an explosive rushing game.

“We were able to re-establish our running game and could have put it away if not for some penalties and fumbles,” remarked New West coach Farhan Lalji. “We weren’t able to get anywhere on our first drive and they scored on their first (drive – a three-yard run). But we were able to move the ball well for most of the game.”

Down 7-0 entering the second quarter, New West racked up 16 points on the strength of a safety, Planinsic’s 35-yard run, and Mahtab Garcha’s 11-yard dash. Samuel Webb pulled down a 23-yard TD pass from Payton Myers to up the lead to 24-14, but the Bulldogs kept battling, taking the lead on a pair of runs.

Cue Udoh, who would finish the day with 161 yards on 14 carries. Picking up 137 yards on 15 carries was Planinsic, while Jayden Kastelein chipped in 30 yards.

“That’s the fourth time that both (Udoh and Planinsic) both had games over 100 yards,” noted Lalji. “We didn’t have to throw it because the running game was working so well.”

New West now turns its gaze to Friday’s huge game (7:30 p.m. at Mercer Stadium), where they face the undefeated and No. 1-ranked South Delta Sun Devils.

The New West-South Delta matchup, where a win could mean first place and a playoff opening bye to the victor, already had plenty of meaning with the traditional Kushnir Boot on the table.

“It’s developed into a real thing, this rivalry,” said Lalji. “The Kushnir Boot means a lot for the kids to have, and we’re happy to have won it the past two years. … Nothing really changes preparation-wise. They have some very good defensive players (Rhys Porteous, Evan Paterson and Ethan Troniak), they’re very dynamic receivers who don’t need a lot of space to get open.

“The Grade 11 quarterback (Hunter Norman) stepped in and threw a touchdown right away, so it’s not like they don’t have someone who can’t do it. That’s not to say that (McDonald) isn’t a great player, but they do have a lot of things going for them.”

With the same 5-1 record as No. 2 ranked Vancouver College – who are playing Notre Dame in their final league test – New West could make it a three-way tie atop the Western Conference with a win.

The conference champion will earn a first-round bye into the playoffs and get a friendlier draw for their first game.

612
New West sees big jump in COVID-19 cases
606
Opinion: Now NIMBYs are whining about shadows from new housing
432
Here is how fast COVID-19 can spread after a road trip in B.C. (INFOGRAPHICS)
408
Filming in New West: A bright spot in a challenging year
399
Pfizer temporarily reduces European deliveries of vaccine