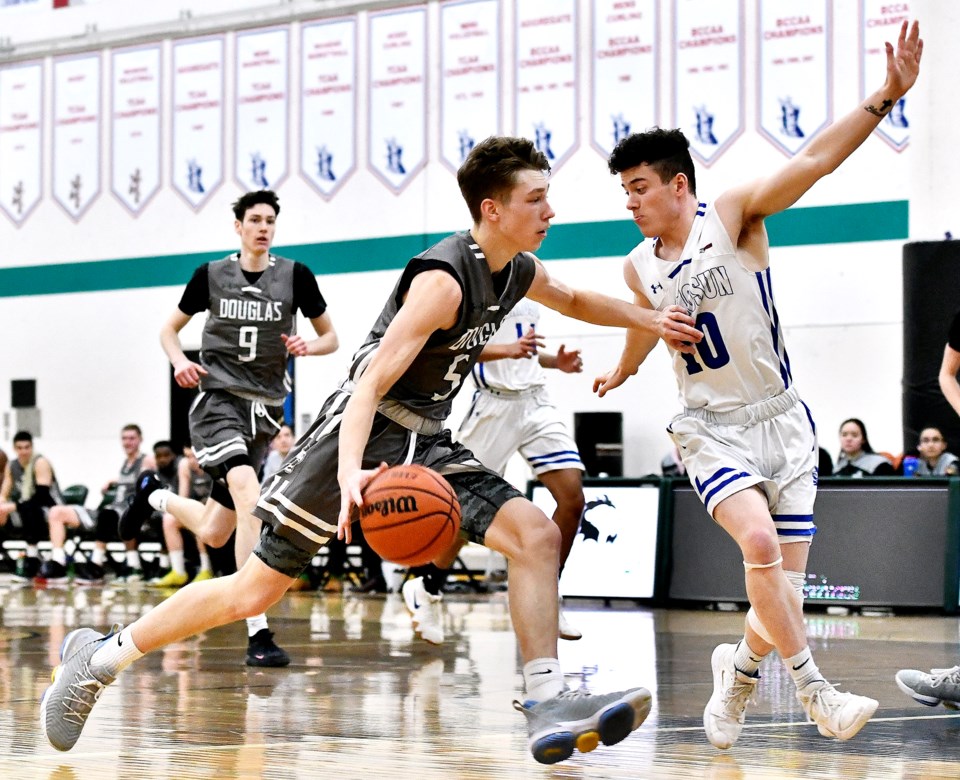 Dylan Kinley and the Douglas College Royals, shown above during the team's 88-66 victory over Camosun College two weeks ago, will take to the court this weekend in the team's pursuit of a PacWest championship title and a berth to the Canadian Collegiate Athletic Association national championships.Jennifer Gauthier

As the No. 2-ranked team in Canada, the Douglas College Royals enter this weekend's PacWest provincial men's basketball championships with eyes wide open.

They will be front-and-centre when it comes to high expectations and prime targets, as the action tips off at Capilano University today (Thursday).

The Royals posted an impressive 17-1 record, but were closely trailed by No. 4-ranked Vancouver Island University Mariners at 16-2.

Since losing the first game of 2020, 95-80 to the Mariners, Douglas closed the regular season on a 10-game win streak.

Led by PacWest Player of the Year Courtney Anderson, the squad has shown a strong offensive flair, hitting triple digits eight times, including a 101-65 win over Camosun two weeks ago.

Anderson counted a team-high 322 points over 17 games, with a 44.6 shooting percentage from the field.

Teammate Reese Morris joined Anderson on the first all-star team, while Dylan Kinley was named to the second all-star squad.

Drawing spots on the PacWest All-Rookie team were Burnaby South alumni Jiordano Khan, named co-winner of the league's Rookie of the Year award, and Aidan Wilson.

Douglas will face the winner of the Camosun-Langara quarter-final, played today (Thursday), in the semifinal on Friday at 8 p.m. Vancouver Island, meanwhile, will go up against the survivor of the Okanagan-Capilano match.

Douglas' Joe Enevoldson was named the PacWest coach of the year.

The championship final is slated for Saturday, 8 p.m. at Capilano University.

The women's championships, meanwhile, provides the Douglas College Royals a chance to play the underdog card.

First team all-star Sydney Fraess will lead the way as they play the Okanagan College Coyotes today (Thursday), 12:30 p.m. in one quarter-final. If they win, Douglas will meet Capilano tomorrow (Friday) in the 12:30 p.m. semifinal. The championship game is Saturday, 5:30 p.m.