Royals chart sure course to nationals

They know their future, but the Douglas College women’s Royals soccer team want to cinch their destiny.
Aug 23, 2018 7:20 PM By: Dan Olson 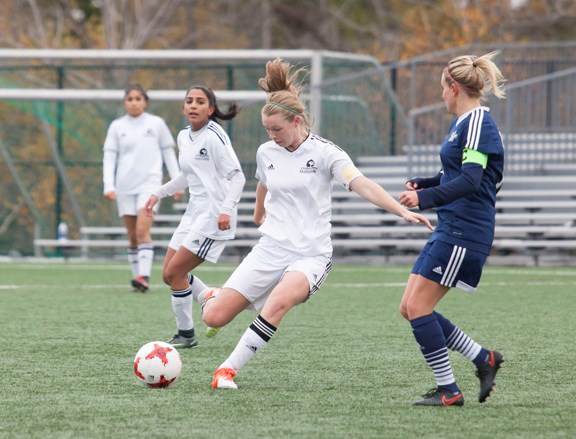 Douglas College Royals’ captain and PacWest 2017 leading scorer Sam Kell pushes the ball forward during last year's nationals. The club enters the new season knowing they’ll qualify for the Canadian national championships, as hosts, with the aim of ending the season on a winning note.Courtesy CCAA

They know their future, but the Douglas College women’s Royals soccer team want to cinch their destiny.

The squad enters the 2018 PacWest League season with a big red circle on their calendar as hosts and participants at the Canadian Collegiate Athletic Association’s championship in November.

All the stressing and hand-wringing that goes with battling for a berth can be cast aside – or at least converted into something more organic – as the Royals hone in on building a challenger for a national crown.

After last year’s PacWest league title and a fifth-place finish at the nationals, knowledge and experience will be major assets as the squad kicks off the regular season Sept. 8 against Langara at Coquitlam Town Centre Park.

“Our focus is to find a rhythm, find who plays well together, what formations we can throw out there and give players minutes,” remarked head coach Chris Laxton on Tuesday. “Most important, give players rest so we don’t need to put them through the grind of 12 games in seven weeks. We can hopefully give them time to rest and be ready in time for November.”

Knowing you’ll be playing Nov. 7 to 10 with the rest of Canada’s best teams eases some of the early details every club faces to launch a season. But it doesn’t inoculate them from doing all the hard work and checking off the necessary items when it comes to marking a successful year.

A Coquitlam native, Perrotta was the league’s top scorer in 2016 as a rookie and is expected to be a major contributor after missing all of 2017 due to injury.

Also expected to make a big play for more responsibilities is second-year forward Martina Pettenon, a Burnaby Mountain alum, who scored a key goal in the provincial run a year ago.

The backline as a whole is intact and one of the reasons Laxton feels confident that they can convert on last year’s promise, which saw them capture the league crown in penalty kicks over archrival Capilano.

Returnees like Burnaby’s Ashley Bristow, Surrey’s Sonali Dholliwar and Coquitlam’s Alyssa Lum are part of a deep defence that works in tandem with goalkeepers Alexa Gazzola and Nicole Scott to keep the ball at bay.

“Our backline is strong and they’re just trying to click together in pre-season. Hopefully we’ll see more from there. Our attacking group, with Mikaela and Andy the last two (league) MVPs, will add a spark going forward,” he said.

When it comes to new additions, the team stocked up at every position, including Burnaby midfielder Mikaela Montagano, Surrey forward Sofia Flores-Aguilera, Ladner centre back Hannah dela Cruz, and midfielder Emma Thomas of PoCo.

“They’re going to make an impact in their first year, especially with the minutes we’re able to throw around knowing our end date and we know we’re going to play in November,” said Laxton of his eight additions.

The pre-season results haven’t been all negative, despite the losses to Simon Fraser University and a premier youth squad. Air quality squashed a planned exhibition test in Bellingham on Tuesday, and hopefully won’t scrub games planned in Kamloops this week.

Building for November won’t mean easing into September. Last year’s 1-1-1 start isn’t something they look to emulate, but knowing they’ve got plans in November doesn’t erase the pressure. It’s just now more internally, and will give them a concise blueprint to follow and improve on during the coming months.

“It’s going to be me putting my ego in check and making sure we’re doing the right things instead of chasing things we don’t necessarily need,” said Laxton.

“It’s about finding a groove and ultimately winning three games in November, that’s what it ultimately comes down to.

“If we do everything right, hopefully things go in our favour and we get the bounces.”

1262
Luxurious residences are setting a new standard of living in Langley
450
Here’s where people who are homeless in New West can enjoy a hot shower and get a comfort kit
207
UPDATE: Here's where you could be able to buy cannabis in New West
180
New West now grappling with second big COVID-19 outbreak
69
Opinion: This protest in front of NWSS against an affordable housing project is ridiculous