For their first foray on the international stage in red and white, the Royal City Track and Field Club’s Jarrett Chong and Jenevieve Patry- Smith will soak up some sun as members of a 42-athlete Canadian team in Jamaica.
Jun 25, 2018 9:00 AM By: Dan Olson 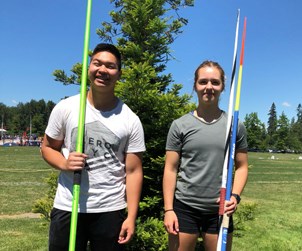 Royal City Track and Field Club javelin throwers Jarrett Chong and JV Patry-Smith are heading to Jamaica after being chosen to represent Canada at the Jamaican Under-18 Invitational.Contributed

For their first foray on the international stage in red and white, the Royal City Track and Field Club’s Jarrett Chong and Jenevieve Patry-

Smith will soak up some sun as members of a 42-athlete Canadian team in Jamaica.

The pair were named to Team Canada, thanks to being ranked No. 1 in their respective javelin divisions, for the upcoming Jamaican Under-18 Invitational – a competition that was created after the cancellation of the North America-Central America championships (NACAC) u18 championships, which were to go this week in Nicaragua, due to political unrest.

Now, after a series of strong performances over the past month, they will have the unique opportunity to celebrate Canada Day while wearing the Maple Leaf and competing for their home country on foreign soil.

“They are very excited, and very excited for all the neat gear they get with Team Canada on it,” remarked Royal City coach Kevin Smith. “It’s a big one and they get quite a bit of stuff. They get a jacket, pants, warmups, competition singlet and shorts.”

Swag aside, the accomplishments and standards met over the past month came in high-pressure situations, preparing the pair for the international spotlight in Jamaica.

Chong, a Grade 11 student from Port Coquitlam, clinched the No. 1 national ranking position and qualification standard at a Richmond meet last month, and topped the high school provincials with a throw of 55.47 metres with the 800-gram javelin, more than three metres further than his nearest rival.

He continued to hone his craft this past weekend, reaching a distance of 66.82m with the 700g javelin at the Pacific Invitational in Langley.

“It’s an absolute thrill. When Jarrett threw that (66.82m), he thought he was having a very good series and I knew it was a big throw and suspected it was over 66. He came up to the fence and we got ready for a big high-five when they called out the number,” said Smith.

Chong’s result in Langley also met the Youth Olympic standard, one of the biggest personal goals set at the beginning of the year.

For Patry-Smith, the deciding factor in making the national team came two weeks ago at the Jesse Bent Invitational in Coquitlam. A week earlier, the future University of B.C. thrower finished third and subsequently fell out of the No. 1 Canadian slot to national champion Rori Denness of Earl Marriott, whose throw of 41.75m was two metres beyond the Royal City athlete’s best on the day.

At the Bent meet, however, the Ecole des Pioneers Grade 12 student reclaimed the top spot on the national rankings by edging Denness with a distance of 45.02m, with just a little more than one metre separating the two.

“Both (Patry-Smith and Chong) work incredibly hard at their craft. They are dedicated to going into the weight room on their own, and obviously they are very similar athletes,” said Smith. “They are both small for what they do, and both have, up to this year, done all four throws. They are quite hungry.”

The fact that the duo has trained and excelled at the four field throwing disciplines into high school – discus, hammer, javelin and shotput – has given them a unique advantage as far as training goes, their coach noted.

“There are no other athletes, no other throwers in the province for sure, and possibly for Canada, that have done all four throws for as long as they have. They’ve both done very well provincially and nationally in shotput, discus, hammer and javelin.”

Smith envisions both as podium contenders in Jamaica, although there is little information on who else will attend from the North and Central American countries.

“Athletics Canada and B.C. Athletics, when they put together teams, they have a philosophy, and while it all comes down to money, but the team selection is based on possible medalist/probably finalist.

“When they set those standards it’s based on a formula where they go back three to five years and look at the average, place and mark of where a person places, in the medals and top-eight. If a kid makes the team it means that if they throw their best, they are a possible medalist and a probable finalist.”

The 42-athlete team leaves for Jamaica next week, with the competition going June 30 and July 1 in Kingston.