Unearthing the history and stories behind a minor soccer club celebrating its 50th anniversary, involves dogged sleuthing through dusty archives and patient spooling through microfiche.
Mar 3, 2016 2:17 PM By: Dan Olson 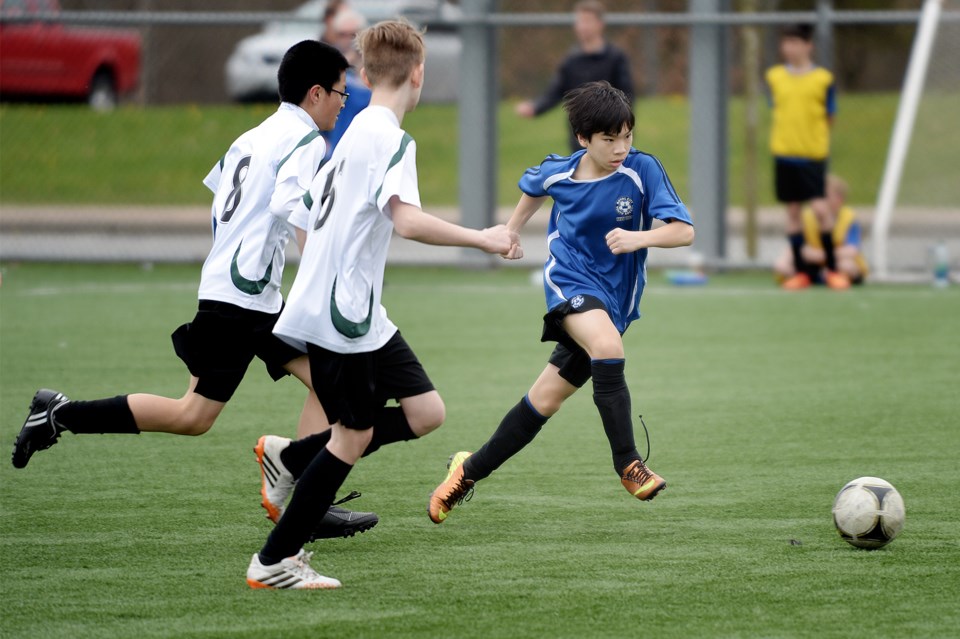 Unearthing the history and stories behind a minor soccer club celebrating its 50th anniversary, involves dogged sleuthing through dusty archives and patient spooling through microfiche.
New Westminster’s Peter Van Garderen added to his executive position the task of detailing the Royal City Youth Soccer Club’s history, and in the process found plenty of interesting information.
As part of this Saturday’s official celebration at the Heritage Banquet Hall on 12th Street, open to all current and past members, (doors open at 6 p.m.), the club undertook a detective-like dig into its past.
Royal City started up in the mid-60s under the leadership of Don and Evelyn Benson, Van Garderen said, to give the kids something to do during the fall and winter months.
“The origins of the club are typical New Westminster, in that lacrosse played a part,” said Garderen, who talked with Benson about the early days.
“(Don Benson) had a group of boys, lacrosse players, that wanted to stay together and their families wanted them to find something that kept them as busy (in the fall and winter) as the spring and summer did with lacrosse.”
That peewee-aged team, the Queen’s Park Rovers, would march all the way to the B.C. semifinals in their inaugural season.
“So that’s where soccer came in.”
Originally the Royal City Soccer Club, it would add ‘Youth’ to the title in 1991 to differentiate itself from a club in Guelph, Ont. with the same name.
The first few editions of the club were successful, based on the one lacrosse team.
“That team (Benson) worked with was very successful, and would go up to Kamloops and won an all-star tournament in both soccer and lacrosse.”
Other people stepped in to lend their expertise and support, and more teams were added.
Current president Guy Ciprian brings his own history with the club, having started playing as a youth in 1972. After some years being away from the sport, he got involved again as a parent. That is the kind of circle of volunteers – from athletes to coaches and supporters – that helped create a solid foundation, he said.
“We’re a small city that has a rich sports history,” said Ciprian. “Lacrosse has a huge profile in the city, and football under (Farhan Lalji) and hockey… But soccer was the first sport played in this province way back when, and it was a game between the township and the Sappers.
“The rich history goes back a long way.”
Dating back to 1862, that historic game was documented in the newspapers of the day.
Van Garderen interviewed one-time president Joe Bell, who provided insight into the evolution of the club during the 1970s and 80s. Bell promoted the game with his distinctive Scottish brogue, and was the major force behind the Queen’s Park Rangers that dominated the men’s Pacific Coast League in the 1980s.
While Van Garderen discovered some interesting tidbits about the club, he also found numerous gaps in its history.  It wasn’t until 1994 that the club actually kept and maintained its meeting minutes, and as Van Garderen looked through them he found familiar themes.
“Those meetings involve issues of the day that continue today,” he noted. “They’d talk about the city Parks department and field allocation… Things we are talking about today.”
In the 1990s, Anne Monks stepped in when the club was going through a tough patch and put the pieces together. Her efforts helped put it on a strong footing, said Van Garderen, as Monks bolstered the program from 300 players to over 1,000 -- to a position where it was fiscally sound.
“She was a force of nature and she was a soccer mom who just rolled up her sleeves. She was doing all these things and getting treatment for cancer, something that most people didn’t know,” he said of the then-president, who passed away in 1999.
Ciprian said what made the club run in its early days is still the driving force now – volunteers who put the kids first.
“We’re a small club but what makes us go is a lot of people with big hearts.”
Tickets for Saturday’s event, which features food, music, a cash bar, and plenty of memories to share, can be purchased at the door ($25), by emailing Ciprian at president@rcysc.com or Heather at heather.rcysc@gmail.com, or via the website www.rcysc.com.