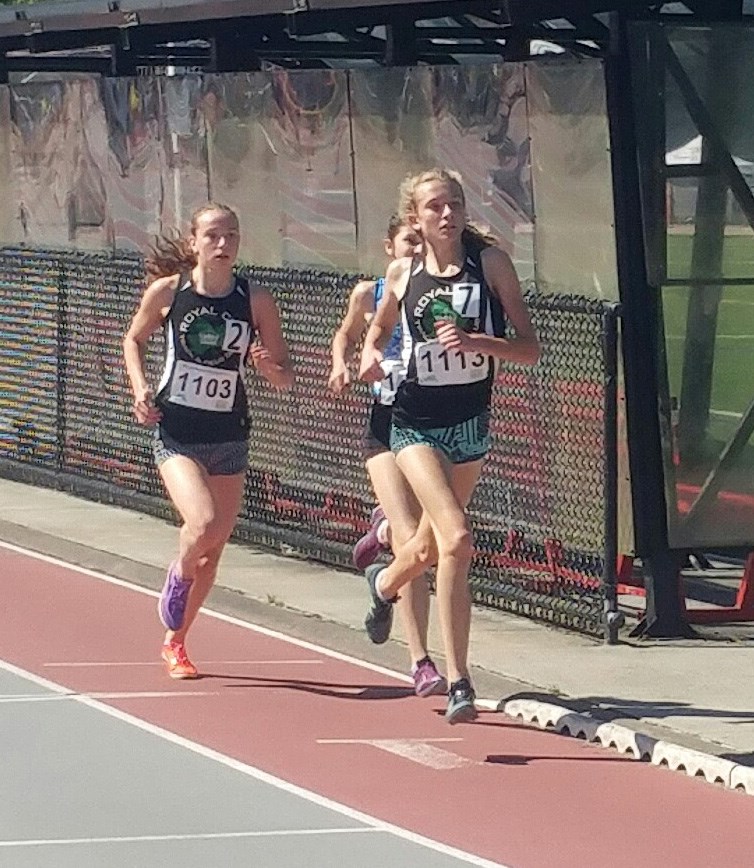 Royal City runners Isabella Brunoro, left, and Katelyn Stewart-Barnett race to the finish line at the B.C. Track and Field Jamboree two weeks ago in Coquitlam.Contributed

Whether it's from college-bound standouts like Grace Fetherstonhaugh and JV Patry-Smith, or the up-and-coming young stars flocking to the track, there's plenty of reasons to smile.

The New West coach witnessed a host of great results earlier this month at the B.C. Track and Field Jamboree championships in Coquitlam, where medals were more than a meme for the club.

Royal City racked up 21 pieces of hardware at the competition, with a bevy of new personal standards set along the way.

"We had all our club athletes firing on all cylinders," remarked Dixon.

A number of them carried it over to the B.C. Summer Games (see separate story).

At the jamboree, two athletes peeled off multiple gold and PBs, and Dixon noted that those were bolstered by strong performances by clubmates, who were either second or in the medal hunt.

Goudron also collected three bronze, finishing third in the 300, 800 and 2000m races. In the 2000m, Ruckman-Utting was right on his heels in fourth spot.

"For the number of athletes we had pick up a lot of medals, a lot of the kids came back with PBs," said Dixon.

JV Patry-Smith scored gold in u18 women's javelin with a distance of 44.90m, and a bronze in shotput. Ella Foster, meanwhile, registered an impressive pole vault of 2.75m to collect u16 silver, then picked up bronze in the triple jump.

Hillary Miller posted a silver with her open division discus toss of 26.81, Lauryn Savela finished second in javelin with a throw of 40.72, and Emma Dolman secured a bronze in the 400m hurdles.

Jarrett Chong toppe the men's javelin with a toss of 63.25m. In triple jump, Jeremy Belcher nailed a jump of 12.01m for silver, while Kiran Wanniarichichi cleared 1.80m in the high jump for bronze.