A two-game run – that is what’s required for the Douglas College Royals’ women’s soccer team to advance to the Canadian Collegiate Athletic Association championships.
Oct 26, 2017 1:59 PM By: Dan Olson 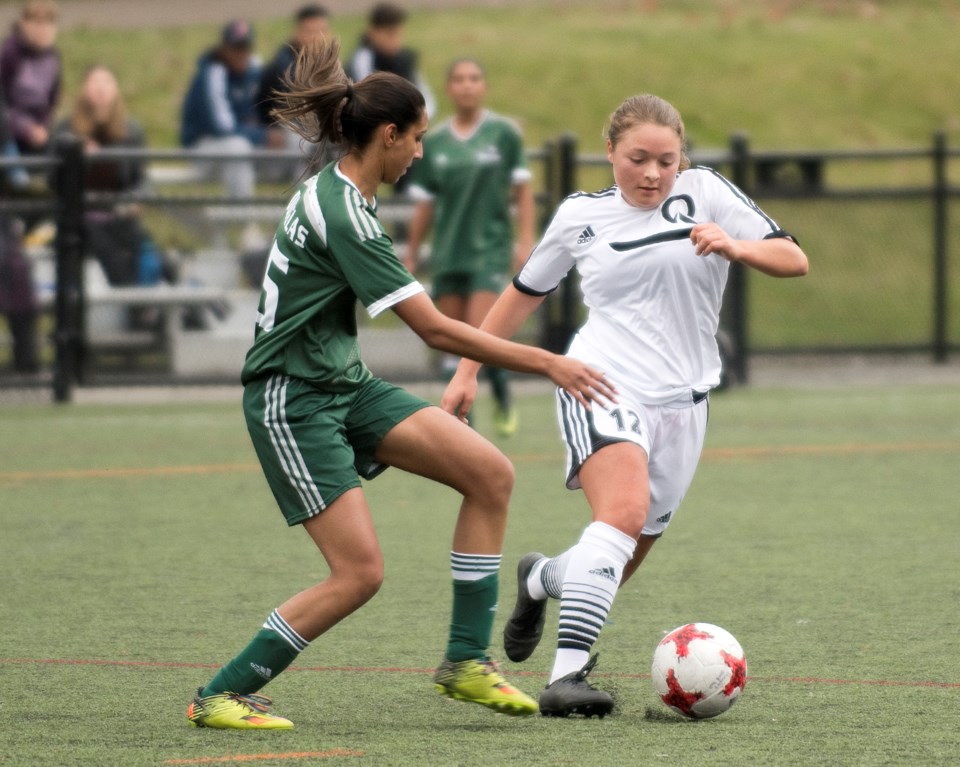 Douglas College's Jasdeep Gill, at left, pressures a Quest University rival during recent league action. The Royals are looking to earn their third straight berth to the women's soccer nationals as they play at the PacWest championships in Squamish this weekend.Jennifer Gauthier

A two-game run – that is what’s required for the Douglas College Royals’ women’s soccer team to advance to the Canadian Collegiate Athletic Association championships.

It’s also what three other teams are vying for, as this week’s PacWest provincial championships hit the Quest University turf in Squamish.

Having locked up a league title in Saturday’s 2-1 victory over the Capliano Blues, the Royals have ranking on their side. But that is still $4 short for a tall latté in real life.

Douglas’ head coach Chris Laxton said his crew is as prepared as possible, and having played in the past two provincial finals and back-to-back nationals, they know how to approach Friday’s must-win semifinal against Vancouver Island.

“We’re feeling pretty good, but when it’s a one-off game it’s fairly tricky,” said Laxton. “Fortunately, with the past few years we have experience in these big games.”

As do the Mariners, who were the Royals’ rivals in those two B.C. finals. Both won once (Douglas in 2015), and while that experience plays right into the build-up, Laxton said his squad has been building toward this moment all year.

In fact, the coach said the addition of Leanne Fielding to the staff a few years ago as mental preparation coach has been a big asset.

“In the last two years we’ve played (the Mariners) 11 times, so we know each other very well and there’s not many secrets,” said Laxton. “I think an edge for us has been in mental preparation, and that’s due to (Leanne Fielding). In my first year, after we lost in the semifinal, we realized that we needed someone to help with our mental strength.

“Since then, we’ve won big games and lost big games but we’ve been in every big game. (Fielding) has been quite instrumental in getting us playing with consistency.”

It was a big game last week against Capilano that wrapped the regular season, with the winner taking top spot.

The Royals took the lead six minutes in when a well-placed free kick was misdirected into the net by a Capilano player. In the second half, Douglas went up 2-0 when a cross again hit a Cap defender and ricocheted into the net.

While the Blues made it close with 10 minutes left, the two own goals gave the Royals the win.

With a roster that features just one graduating player – fifth-year co-captain Michelle Wessa – coach Laxton said getting to a third straight nationals would be a great opportunity for his young squad.

It will be also a big step for the program, which is hosting the 2018 nationals.

“Once we were (awarded) the nationals our focus turned to 18 months. It puts additional emphasis on this year. We really want to get there this year as part of preparing for next year.”