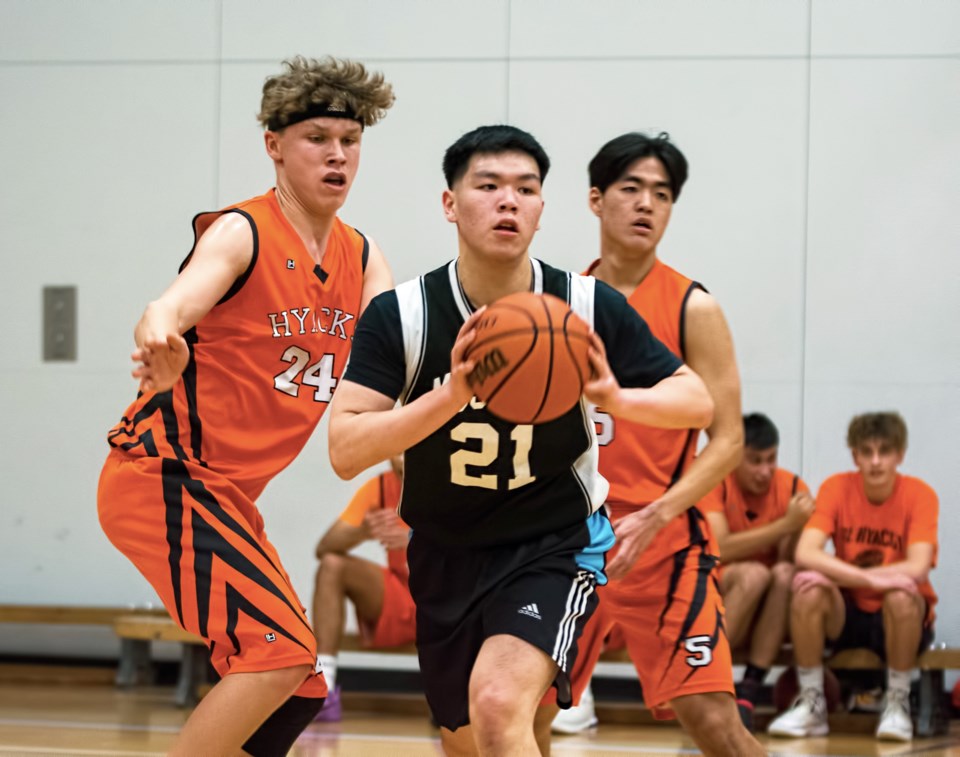 New Westminster's Quentin Leberg and Troy Kim work defence against Moscrop's Oliver Seifan during a game last month. Both teams will by fighting for their playoff lives on Monday in do-or-die qualifying games at NWSS.Chung Chow

A season of hardwood experience now gets down to the nitty gritty.

New Westminster's senior boys basketball team has ridden a rollercoaster through the past two months, with the peaks and valleys something akin to the Lewis and Clark expedition route.

Beginning on Monday, things get real as the Burnaby-New West League playoffs kick off with do-or-die elimination games.

"(Wednesday) I was talking to the team and said, 'Good news and bad news -- we've got the draw and know who we play'," remarked Hyacks coach Ted Cusick. "When they heard (it was Burnaby North) they went 'Uh-huh.' Revenge is a great motivator."

Drawing from their first and only encounter this season, New West will look to exact a measure of satisfaction and turn the tables on the Vikings, who erased a 30-point deficit to shock the Hyacks 76-74 on Dec. 10.

A lot of things have happened since, with the Hyacks finishing league play in third place with a 5-3 record. Burnaby North, meanwhile, ended up tied for fifth spot with Burnaby Mountain at 4-4.

Although the past week saw a pair of tough losses thrown their way, the Hyacks hope to use all the fodder possible in getting prepared for Monday's crucial game.

"It's do or die. After Monday, one team's season is over," said Cusick. "I don't think there's any better motivation than that."

Helping prepare them for the playoffs were regular season contests against Burnaby South on Monday and Byrne Creek on Wednesday. That neither game was close could be disheartening, but Cusick said the Rebels and Bulldogs were very strong and showed why they are ranked in their respective divisions.

Without the services of captain Kirk Bothwell and Grade 11 forward Quentin Leberg, New West lacked an inside presence. Luke Dixon led the attack with 16 points, while Caleb Johnson chipped in 10 points. Pulling down a team-high 11 boards was Adam Durnev.

"We just didn't play well," said Cusick. "We got beat by a smaller team, but boy, can they shoot. We were buried right away."

A string of three-point buckets by the Bulldogs placed them in a hole early, and even though the Burnaby coach rolled his lineup over with substitutes, they continued to score.

"We kept trying to get back into it but they just kept hitting three's and we couldn't."

Although they were losses, Cusick said the lessons were evident.

"It shows what you have to get to, what's ahead if you can match that intensity," he noted. "To keep playing, you have to play with the big boys."

The league's other first round qualifier sees No. 4 Moscrop take on Burnaby Mountain (5:15 p.m.) on Monday. Both games are hosted by New West.

Action turns to Burnaby South on Tuesday, when the survivors of the first round advance to the semifinals. If the Hyacks beat Burnaby North, they'd line up to face Byrne Creek, 5:15 p.m., while the Moscrop/Mountain winner would play the host team at 7 p.m.

The district playoffs wrap up Thursday, with the semifinal losers playing for the third-and-final berth to the Fraser North playdowns at 5:30 p.m., while the winners meet at 7 p.m. to decide the Burnaby-New West league champion, at Burnaby South.