Getting into the dome is always a big challenge. Staying there is even more so when the draw gets whittled down to a handful of titans. The New Westminster Hyacks saw their three-year streak of making it to the B.C.
Nov 19, 2019 9:52 AM By: Dan Olson 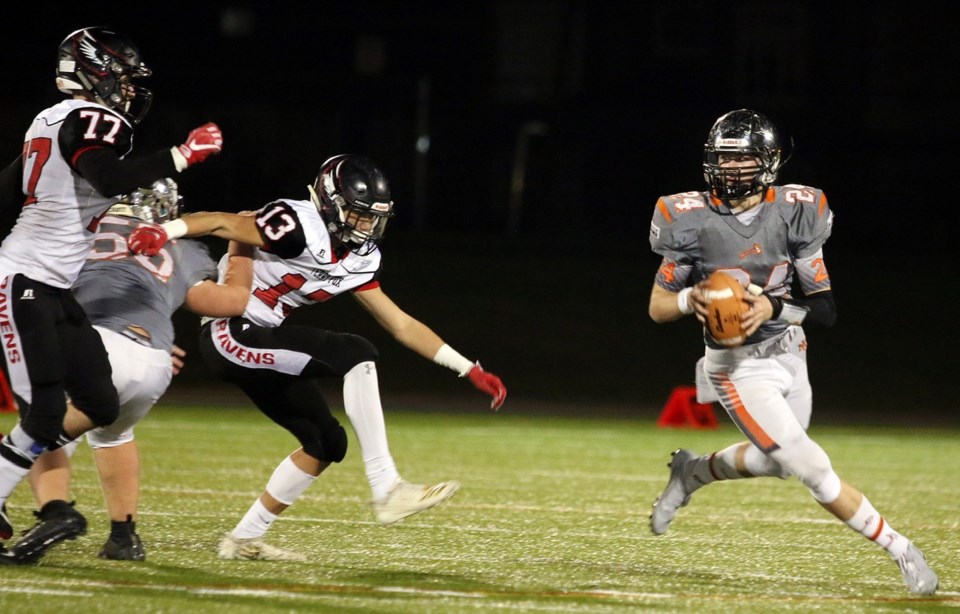 Getting into the dome is always a big challenge.

Staying there is even more so when the draw gets whittled down to a handful of titans.

The New Westminster Hyacks saw their three-year streak of making it to the B.C. Subway Bowl AAA football semifinals (and further) stopped Saturday in disappointing fashion, falling 36-7 to the Lord Tweedsmuir Panthers at BC Place.

A good start, which saw them take a 7-0 lead into the second quarter, was erased in a flash once the second half began, with Tweedsmuir cashing in a pair of kick-off returns, including the first play of the third quarter.

After the Hyacks’ Deakon Young opened the scoring with a 10-yard run, the offence stalled and was struck with a combination of bad luck, poor execution and a predatory Panthers’ attack. The defence held the Surrey school to just a pair of field goals in the first half, but no one couldn't predict how everything would unravel after the break.

“We started well. We felt good going into halftime at 7-6 and thought we had more to give offensively,” New West coach Farhan Lalji said. “We felt good at where we were at halftime, but I don’t know if I’ve been a part of a second half like that. The third quarter, especially, was just a complete disaster.”

It turned on the first play of the half, when Haydn Stomperud’s 90-yard kickoff return gave the Panthers a 13-7 lead. It was followed in quick procession by a New West turnover, a high snap that eluded quarterback Andros Dancey, that Tweedsmuir recovered at the one-yard line.

Quarterback Key’shaun Dorsey converted it quickly to make it 20-6, and the avalanche had begun.

The Panthers would keep the assault going, thanks to another New West miscue which saw a fumble put the ball back in Tweedsmuir hands on the New West 26-yard line. Although Dorsey’s pass would be intercepted by Dancey, now at defensive back, he couldn’t escape the end zone, with the safety making it 22-7.

The following kick was just more salt in the wound, as this time Tremel States-Jones dodged the Hyack tacklers and returned it 50 yards for six points.

That was the third quarter, and the game, in a nutshell.

“For us to, right after (Stomperud’s touchdown), not be able to generate anything then give up another turnover and a score again,” said a frustrated Lalji. “You give up one, you should be able to respond. It’s a one-score game and you should feel good where it’s at. Problem for us, when we’re down by two scores and the way it happened, with the fumbled snap and the gift touchdowns, it hit us pretty hard.”

The special teams did most of the damage. New West managed only 135 total offensive yards, while Tweedsmuir gathered a modest 215, including 138 on the ground.

Dancey, who had taken over the starting pivot role earlier in the month, completed four of nine pass attempts for 26 yards, while Greyson Planinsic returned to the lineup after missing last game due to injury and gained 73 yards on nine carries.

While both teams entered the post-season with 5-2 records, New West did have a 15-6 loss to Tweedsmuir in the season-opening exhibition game as something to build on. Instead, the Panthers turned it up a notch.

“Both teams evolved as the season progressed so we knew it wouldn’t be the same game plan or anything like that. They’ve improved and I think we’ve improved, but these games ultimately come down to execution,” the New West coach said. “But kids are unpredictable, right? As much as you put time in and work, act like we’re collegiate coaches with the amount of film we break down and everything, at the end of the day they're still kids. And sometimes kids are unpredictable.”

Making it tough was seeing a number of Grade 12s who are leaving the field on a sour note. Most had enjoyed strong Novembers, as Grade 10s with the 2017 B.C. champions, and last year’s march to the final where they fell to Mount Doug.

Lalji noted how this year’s lineup, as in past years, has a good group of returnees to take this lesson to heart. The junior team, which made the playoffs before getting bounced 48-24 by Mount Doug last week, will also provide some new recruits.

“Andros (Dancey) will be back next year and we have a lot of skilled kids coming up that are going to be big contributors. I’m optimistic. I don’t think we’ll be a bad football team next year at all. We just have to learn from this year,” he noted.

ALL-STAR NODS: New Westminster’s strong line received some recognition with the unveiling Monday of the league’s AAA B.C. all stars. Pavan Kainth, a six-foot-four, 240-pound lineman, was named to the offensive squad, while teammate Vishaan Narayan, at six-foot-two and 263 pounds, earned the honour on the defensive line. Narayan was one of just three Grade 11s to earn spots on the all-star squad.

416
New NWSS has cost $88.5 million so far. Next step: demolition
257
New Westminster school district eyes 'seamless' child-care plan
223
UPDATE: Here's where you could be able to buy cannabis in New West
179
New Westminster police board stands by its proposed 2021 budget
175
Opinion: Now NIMBYs are whining about shadows from new housing