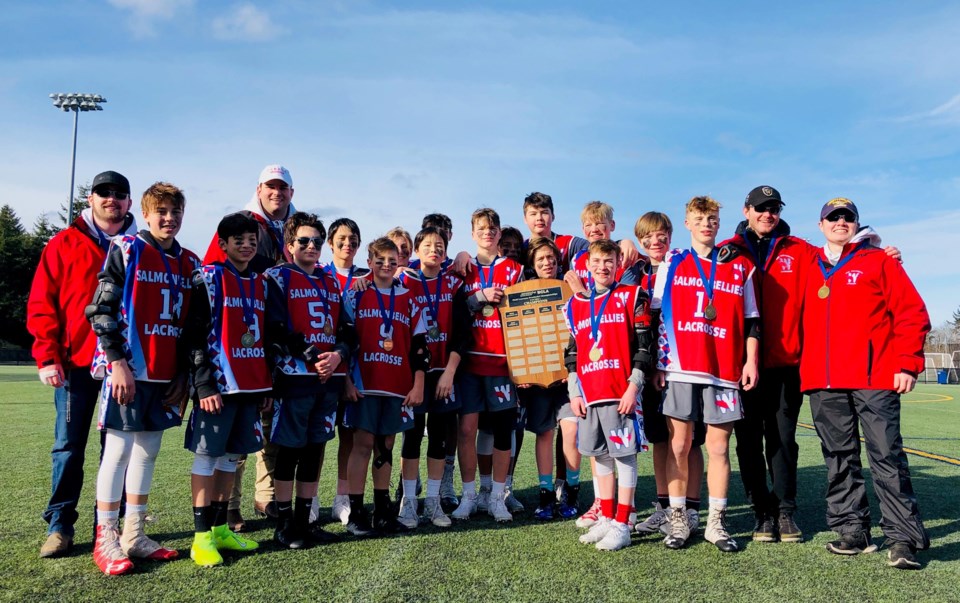 The New Westminster under-13 Salmonbellies celebrate their tier 1 B.C. title.Contributed

Just as it began, the New Westminster Salmonbellies closed the book on the 2019-20 field lacrosse season with an 11-9 win.
In between, there was lots of growth, plenty of learning and zero losses – adding up to an B.C. under-13 field lacrosse championship.
By defeating the Coquitlam Adanacs in the tier 1 championship final, the young crew capped an incredible season and set a strong course for years to come.
“This group was all heart. Our guys battled for everything and left it all out on the floor,” remarked ’Bellies coach Mitch Cavallarin. “That said, (Coquitlam) was on us all the time. It could have gone either way.”
New West never trailed in Sunday’s final, building a solid lead early then fending off the Adanacs rally attempts.
“(Coquitlam) were coming quick and crawling back, but we got ahead early and managed to protect it well.”
New West’s co-captain, Myles Gifford, was the team’s Warriors Fair Play award recipient.
In the semifinal, the’Bellies bested Port Coquitlam 11-4. The road to the final included a 3-0 run through the round robin, including an 8-2 win over Coquitlam.
They also knocked off Maple Ridge 14-8 and Langley 20-7.
During the regular season they were a perfect 10-0, and through three tournaments, including the provincials, added 15 more wins.
“The best part of this team was how they were able to make mistakes and learn from them. Whenever the spotlight was on, someone different stepped up. It wasn’t just one or two players; everyone contributed,” added Cavallarin.
“It was a pretty remarkable year. They just ran with it right from the start. This is the first (age group) where you can win provincials, but they were pretty strong in past years, too.”
New West’s lineup consisted of: Alistair August-McIvor, Timothy Chiang, Oliver Christiansen, Owen Christiansen, Evan Connelly, Cohen Domaas, Myles Gifford, Wren Glanville, Aidan Graham, Robert Knutson, Myles Manolson, Wyatt Pinkney, Jaxon Roy, Justin Timoffee, Malcolm Tyler, Josh Van Dop and Sasha Zuk. Coaches are Mitch Cavallarin, Justin Booth, Andrew Gallant and Brandon Goff.
* The u13 tier 2 Salmonbellies’ Lexy Stevenson picked up the Warrior Fair Play award, after the team finished up its provincials.