The bright lights and crowded field gave New Westminster’s Grace Fetherstonhaugh a glimpse into the future. The results reflected how much she enjoyed it.
Apr 19, 2017 6:32 PM By: Dan Olson 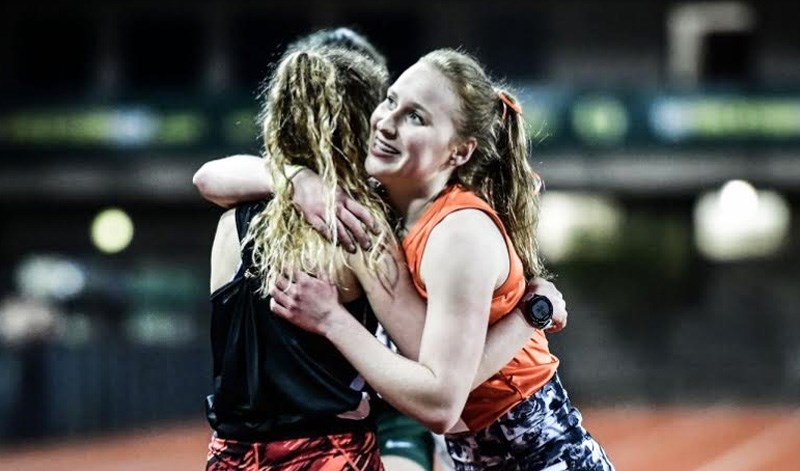 The bright lights and crowded field gave New Westminster’s Grace Fetherstonhaugh a glimpse into the future.
The results reflected how much she enjoyed it.
The Grade 11 athlete, whose past personal bests earned her prime positions in two Oregon Relay events, made her first foray on the U.S. track this past weekend a successful one.
Fetherstonhaugh collected new personal best times in both the 1500- and 3000-metre races, with the latter resulting in a
silver medal.
“It worked out really well for me. I was super happy with how my races went, and it was a real great experience to race down there,” said Fetherstonhaugh.
The Royal City Track and Field Club member finished
second in the 3000m, right behind long-time running friend and rival Taryn O’Neill of George Elliot Secondary, and placed fourth in the 1500m.
Fetherstonhaugh’s 3000m finish time was especially memorable, getting her under the 10-minute barrier for the first time. Her 9:52.07 represented a major breakthrough, besting her previous mark of 10:05 set last year at the B.C. High School championships.
“I was trying to go under 10
for a while now, so was (O’Neill),” remarked Fetherstonhaugh. “I was just hoping to get a personal best and under 10, and a top-three. I was aiming to tuck in and see what happens, just give it all I’ve got. ... I was so happy, like ‘Finally.’
“It’s one of those moments that you’re – I really wanted to get under 10 for such a long time. It was like, ‘Really? I’m under 10? Okay that’s good.’ Now I want to work on getting a better run and a faster time.”
Her time in the 1500m of 4:35.80 was nearly three-seconds better than her previous mark.
Royal City coach Sean Dixon said the 10-minute barrier, coming on such a huge stage, couldn’t have been bigger.
“We went in just trying to make some numbers and get sub-10,” said Dixon. “The time was fabulous and the (second) placing was icing on the cake.”
It was part of an excellent showing for all four members of the Royal City team in attendance, as throwers Brianna Bates, Zuzanna Liniewski and Jenevieve Patry-Smith hit new heights in their respective disciplines.
Bates, also a New West Secondary athlete, finshed 20th overall in the javelin with a distance of 34.62 metres, while Coquitlam native Patry-Smith stood 22nd, with a throw of 34.16m. Patry-Smith also posted a second personal best in the discus, placing 21st with a throw of 31.11m.
Liniewski, a Grade 9 athlete from Burnaby North, was impressive in finishing 11th overall in the hammer throw with a throw of 31.64m.
All were using heavier, 600-gram discus and javelin and four-kilogram hammer, compared to the B.C. high school standard.
“For (Liniewski) this was a real happy moment,” said Dixon. “She’s just in Grade 9 and learning the hammer throw. She went in quite nervous but the goal was to get over 30m, and her first toss she did it. Every throw was better than the last.”
They all turn their focus towards the B.C. High School championships in six weeks’ time.
For Fetherstonhaugh, the success was validation for all the hard work she has put in, and all the support she has received from her family and coaches. It also made her reflect on how much a thrill it is to compete.
“I started doing track and field in Grade 7,” she recalled. “I knew I was long distance from the get-go, I didn’t really try sprinting because I like to run, I like team sports so I like endurance and stuff. I did my first race and I was like, ‘OK, I like this.’”