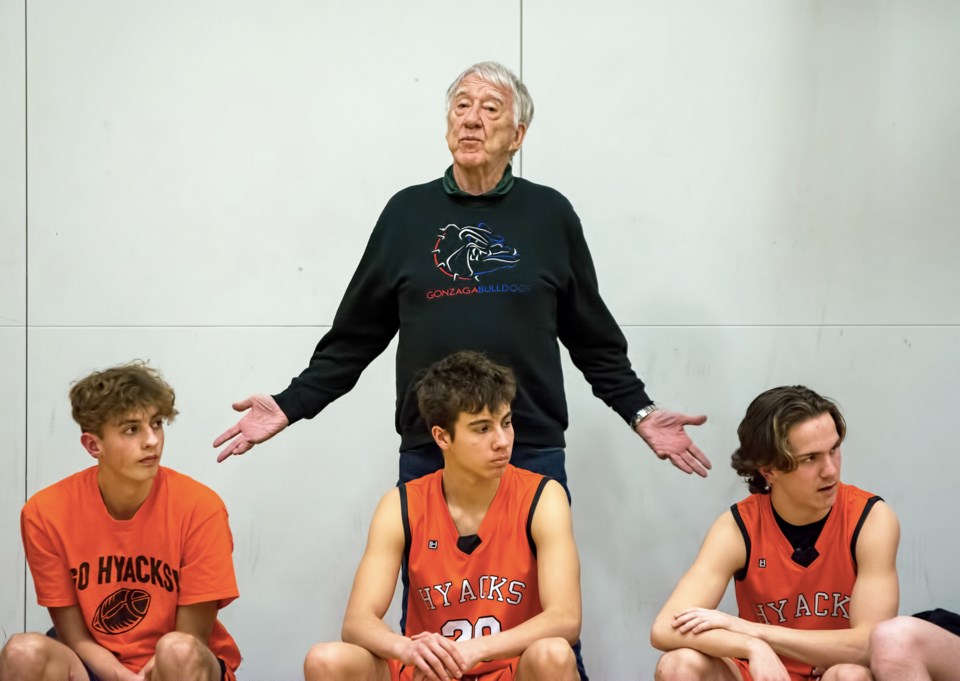 The New Westminster Hyacks senior boys basketball team saw its season come to a halt last week in an overtime loss to Maple Ridge. It also signaled the end of an era, as longtime head coach Ted Cusick announced his retirement after 50 years behind various benches.Chung Chow

It wasn’t the idea of losing his last game that burned veteran boys basketball coach Ted Cusick so much, as it was knowing a handful of his kids were likely leaving the gym for the last time short of what he felt they deserved.

Last Friday’s 87-77 overtime loss to the Maple Ridge Ramblers at the Fraser North zone playoffs closed the books on the New West Hyacks’ 2019-20 season, shy of qualifying for the 4-A provincials.

Having coached at the high school level for 50 years in and around the Lower Mainland, Cusick said it was time to sign off.

“It’s time. ... Fifty years is a long time,” said Cusick, who retired from teaching in 2001 but kept the whistle. “I will miss the coaching, but God I’m old. I won’t miss the working around a schedule where you can’t do certain things because you’ve got to be at the gym for practice every day.”

New West nearly extended Cusick’s season in a drawn-out battle with Maple Ridge, leading by three with but a dozen seconds on the clock.

A misplayed shot became a Ramblers’ rebound, which the rivals drove down court and turned into a three-point buzzer beater from point guard Dale Longmuir to force an extra 10-minute session.

“After they tied it, we were just deflated,” noted Cusick. “It was all up to us, and we had a chance to slow it down and finish it, but we took a risky shot and they got a late chance. ... I feel badly (for the kids), especially those who are walking away from the game, having played their last with a team.”

Bothwell, Mangat and Traverse are among the six players graduating in the spring.

The team’s back was against the wall after dropping the opening game of the zone playoffs, a tough 85-60 setback to honourably mentioned Heritage Woods.

In that tilt, the Hyacks hung tight and only trailed by three with 10 minutes to go, only to see the tide change abruptly, as the Kodiaks outscored them 20-2 over the fourth quarter.

“We just didn’t execute well. We didn’t hit our shots, but that was a theme during the season,” he noted. “In the beginning I saw these guys just light it up in practice and thought that we’ll just jack the threes. But that never happened.”

In the end, facing off against another coach with 50-plus years of coaching, Maple Ridge’s Ken Dockendorf, was a fitting finish.

“Fitting, yeah, if I’d won. A nightmare with the loss,” Cusick said in his typical half-joking delivery.

A longtime coach at Killarney, Windermere and Point Grey, upon retiring Cusick as a teacher took on coaching duties at Riverside and Port Moody before taking on the duties with his hometown team, where he’s spent the past 10 years. On a couple of occasions, he coached the junior side, or served as an assistant. Most of the time, however, he did the heavy lifting of guiding the senior boys program through the rollercoaster ride of what was always a slog to get to the Lower Mainlands.

None of his team have made a provincial final, but in 1975 his Greyhounds team placed fifth, led by firebrand Howard Kelsey. The future Olympian and now Canadian Basketball Hall of Fame member established a then-B.C. record with 125 points over four games, earning the tourney's MVP award.

"I taught him everything I knew," Cusick said with a laugh.

Although he's retiring the clipboard and handing off the play-calling responsibilities to others, Cusick intends to remain active with his pet project, the reporter's helpful tool that is the www.bcboysbasketball.com website.

“I enjoy it,” he said of his basketball duties. “I wouldn’t say it keeps me young, but it keeps me moving.”