It didn’t take too many attempts before New Westminster’s Ella Foster put in a personal best. The Grade 10 pole vaulter garnered a big cheer when she cleared 3.32 metres during Saturday’s event at the Apple Bowl in Kelowna.
Jun 6, 2019 9:52 AM By: Dan Olson 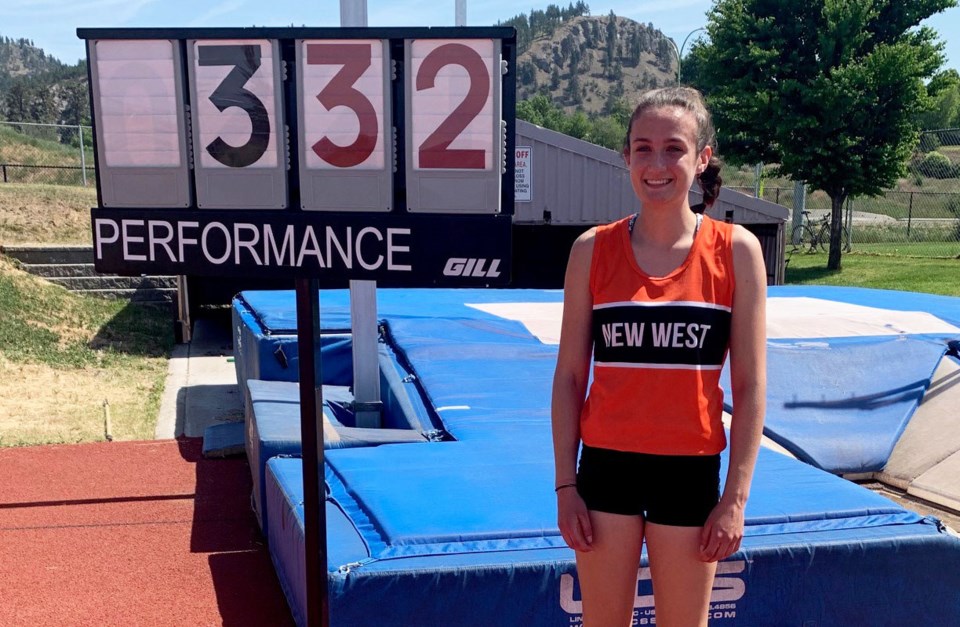 It didn’t take too many attempts before New Westminster’s Ella Foster put in a personal best.

The Grade 10 pole vaulter garnered a big cheer when she cleared 3.32 metres during Saturday’s event at the Apple Bowl in Kelowna.

Having already clinched the gold once she exceeded 3.0 metres, the New West Hyack kept pushing the envelope until she cleared the height that won the senior girls’ title a day earlier, too, at the provincial high school track and field championships last week.

“To beat the record for juniors by one centimetre, it was beautiful,” remarked New West track coach Bryan McMaster. “She did it on her second (of three) attempts, and by then she was the last man standing.”

Foster, who trains under Royal City Track and Field coach Christina Weir on the event, continued on after clearing 3.32, but the hot Okanagan weather and repetitive nature of the event took their toll.

A day earlier, Foster was part of the school’s 4x100 senior girls relay team that finished fifth with a time of 50.34 seconds, just a third-of-a-second out of third place.

In that event, she led off with fellow Grade 10s Kimi Tam, Aja Tjernagel and Grade 11 Emma Dolman following – with Tjernagel as the anchor.

“They had a really good run, each of them,” said McMaster. “Very good exchanges, strong finishes. If you consider that three of them are juniors and all four could be running the event next year, that sets them up nicely.”

Tjernagel would go right from there almost directly to compete in her junior long jump – her strongest event – and understandably was unable to reach a personal best.

McMaster said although Tjernagel was disappointed with the result, she showed great leadership in competing in the relay, knowing that the events were so tightly scheduled.

“We were pleased with her triple jump result, finishing sixth overall, and I think it was great that she sacrificed her best event for the team. That (conflict) won’t happen next year when she’s a senior.”

Another strong result for New West came from Jeremy Belcher, who in the senior boys 100m established a new personal best in placing fifth with a time of 11.17.

He carried a strong performance from the preliminary into the final, noted McMaster.

The Hyacks’ Kaitlyn Hanger, meanwhile, also placed fifth in her senior girls hammer throw, and added points with an eighth-place showing in the shotput.

Monika Arcadi was looking at building on her stellar fifth-place result at the B.C. multi-events meet a week ago, and posted the eighth-best time in the junior girls 1500m steeplechase. A Grade 9, Arcadi’s multi-events tally in the heptathlon may have looked like a step back, after she won the Grade 8 provincial title a year ago, but McMaster notes she was competing against an older field.

“She is pretty good at both the high jump and the running events like the 800m,” said the coach. “To place fifth against Grade 10s (in the heptathlon) was pretty good, and her sights are set for next year.”

While the school’s aggregate total fell well short of past heights, it wasn’t because of a shortage of good athletes, said McMaster.

“Our past strong team results were a product of excellent multi-sport athletes like Raquel Tjernagel, Nina Schultz and Grace Fetherstonhaugh,” he noted. Their wins in their respective events carried a lot of weight.

“After those years of winning provincials with those girls, we were kind of baffled why we didn’t do the same at the zones,” he noted. “So I shifted the focus this year and we won the (local) banner.”

The team consisted of 16 athletes.

It was also a strong weekend for the Glenbrook Middle school team, led by Levi Tuura’s silver

medal in the high jump. The Grade 8 athlete cleared 1.75m for second place, and added a personal best and seventh overall in the long jump.

1383
New Westminster neighbourhood aims to make Lunar New Year magical in 2021
299
Transit police seeking man who allegedly pushed woman to the ground unprovoked at SkyTrain station
232
UPDATE: Here's where you could be able to buy cannabis in New West
165
OPINION: Here's how those millionaires managed to skip the vaccination line
150
ICBC launches online tool to calculate savings with new program