Girls lead the way for Hyacks at BCs

For one, it was a fitting finish. For another, a sign of great things to come. New Westminster Secondary’s girls track and field team sparkled in the mid-Island sun last weekend, bringing home seven medals – including five gold.
Jun 9, 2016 2:41 PM By: New West Record 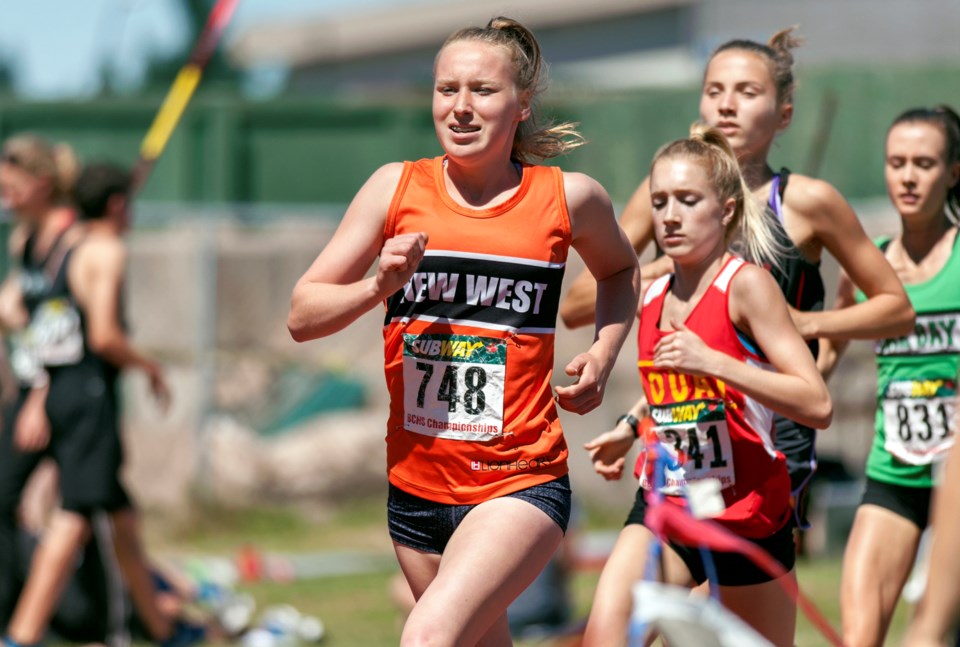 For one, it was a fitting finish.
For another, a sign of great things to come.
New Westminster Secondary’s girls track and field team sparkled in the mid-Island sun last weekend, bringing home seven medals – including five gold.
Graduating with a scholarship to Kansas State in her pocket, Nina Schultz continued where she left off by collecting three first-place finishes, a week after she locked up the hefty heptathlon title.
On the junior girls side, Grace Fetherstonhaugh firmly secured gold in a pair of events.
Schultz collected the senior girls 100-metre hurdles, besting Brooks Secondary’s Callie-Ann Abbott with a time of 13.67 seconds. It was a new personal best for the New West native, who broke her week-old benchmark of 13.98.
She established a new personal gold standard in the long jump, reaching 5.93m, stretching her prior top leap of 5.72, set in March.
Her jump was 0.41 longer than her nearest rival.
In the high jump, Schultz posted a strong 1.70m clearance, edging ahead of G.P. Vanier’s Kyla Gytenbeek’s 1.65m jump.
They were the only medals collected in either senior division by a Hyack athlete, and enough to secure New West second place overall in the senior girls team total. It also resulted in Schultz being awarded the Most Inspirational Athlete prize. The Hyacks edged past Cowichan and Maple Ridge, who were tied for third place, just two points back.
Fetherstonhaugh was a resounding winner in both her junior girls events, setting personal bests along the way. The Grade 10 teen topped the 1500m steeplechase in a time of 5:02.08, with nearly 15 seconds on her nearest rival.
Fetherstonhaugh added the 3000m title, an event she placed fourth in last year.
“I feel both wins were special, but the steeplechase was different because its something that’s still rather new to me, so I was proud to win it,” she said.
She only debuted in the event this season, and the provincials was just the third meet she raced it.
For the 3000m race, Fetherstonhaugh saw a tough field and mapped out a race where she expected to pace and tuck herself behind who she saw as the favourite.
Instead, she took top spot from Sentinel’s Rhian Paterson, who followed closely but couldn’t catch the New West distance runner.
“I was nervous a bit before the race because she had the faster time goin in,” recalled Fetherstonhaugh. “I was really happy with my result.”
She skimmed two seconds off her previous best, finishing in 10:05.90.
Also claiming medals for the Hyacks was fellow juniors Brianna Bates, who scored silver with a javelin throw of 38.54m, Sarah Forgie, who hit 1.60m in her high jump for a bronze, and Finley Cookson, who collected silver in junior boys pole vault with a jump of 3.10m. Coming in fourth was teammate Maxwell Jones, who also hit 3.10m.
For more results, go to www.newwestrecord.ca.