After just over two weeks of league play, the New Westminster Hyacks haven’t lost a game on the pitch yet. They did lose one on the schedule, though.
Apr 19, 2018 7:21 PM By: Dan Olson 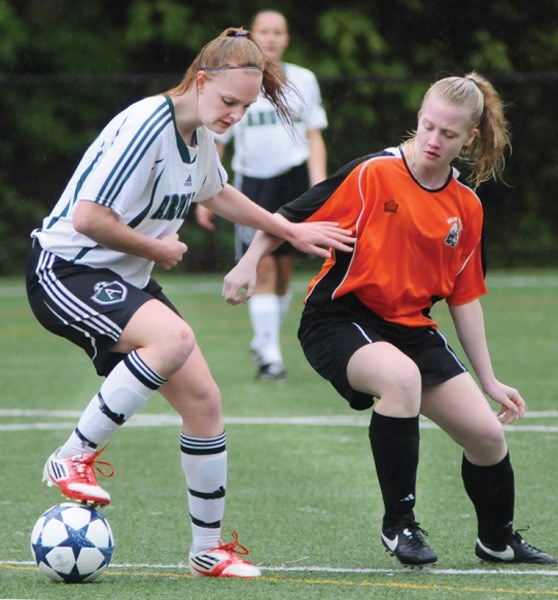 The New Westminster senior girls soccer team are looking to pick up their third win of the high school season this week when they play Alpha on Friday at Mercer Stadium.Record file

After just over two weeks of league play, the New Westminster Hyacks haven’t lost a game on the pitch yet.

They did lose one on the schedule, though.

Tuesday’s match-up against the Burnaby Mountain Lions is the lone blemish for the Hyacks, as the senior girls soccer squad had to forfeit due to a lack of players.

But it isn’t due to dwindling interest, New West coach Wayne McCarthy said.

“We didn’t have enough (players) to play so it turns into a forfeit,” McCarthy said in an email to the Record. “I’m not happy about it, but it may turn into a good learning tool for the kids who don’t update their attendance or let me know that they’re playing. We have a sheet set up to track who will be there, and several players failed to update it the other day.”

A rare alignment of tests, school assignments, work commitments and injuries was a contributing factor; however, apparently none of the players were aware of the compounding absences.

Prior to that, New West’s record was a spotless 2-0 after last week’s 6-1 victory over the Burnaby North Vikings.

Although they fired four shots on goal in the opening two minutes, the Hyacks trailed 1-0 when a Viking capitalized on a turnover and beat goalkeeper Alia Homenuke with a looping shot from 20-yards out.

New West shook it off and continued to push the ball down field, with Grade 11 phenom Nisa Reehal cashing in on a penalty kick, after being taken down in the 18-yard box. Three minutes later, Georgia Brydon counted the team’s second goal off a 15-yard blast. Strong work in the first half from Linnaea Cassidy, Julianna Kemppi, Crystal Singh and Taylor Spong proved to be the creative spark.

In the second half, Homenuke stopped two early Burnaby shots before the Hyacks reclaimed the momentum, with Ava Lee netting the team’s third marker.

Sydney Smith, off a nifty left-footed shot, and Reehal, with a pair to complete the hat trick, rounded out the scoring for New West.

They go for a third win on Friday, 3:30 p.m. against undefeated Alpha at Mercer Stadium. They also meet next Tuesday at Burnaby Lake.