As big an event as draft day usually is, it’s something all together different this year for New Westminster Salmonbellies’ general manager Ray Porcellato.
Jan 29, 2020 4:30 PM By: Dan Olson 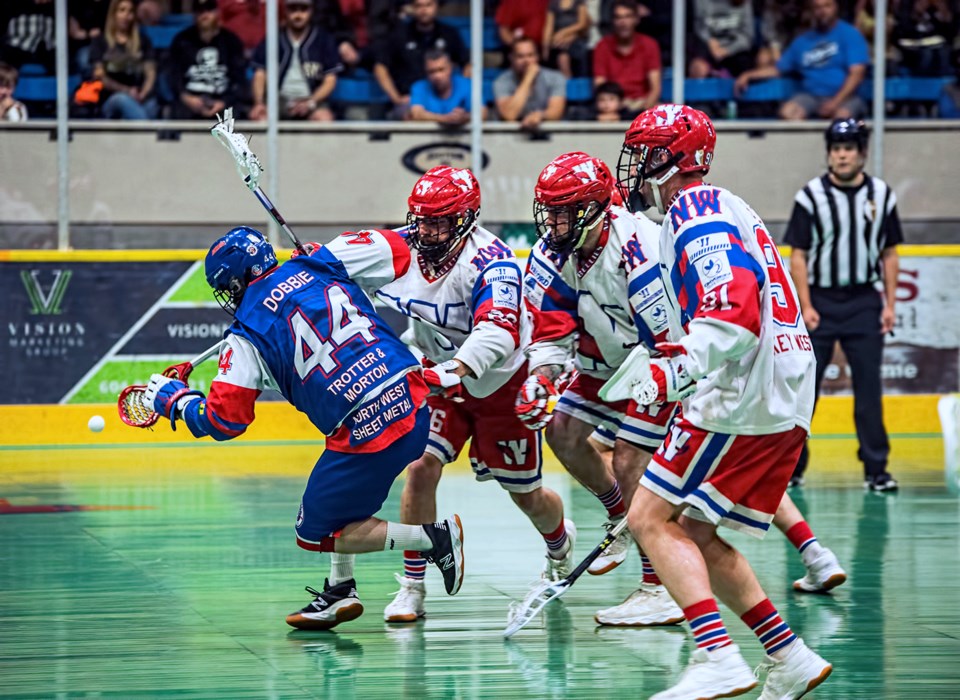 As big an event as draft day usually is, it’s something all together different this year for New Westminster Salmonbellies’ general manager Ray Porcellato.

At his first draft as a rookie GM in the Western Lacrosse Association, Porcellato is checking his list with his scouts, coaches and assistant GM John Richardson. He also has a firm target of competing now and is not putting the upcoming season on a lay-away plan.

Then there’s this year’s draft, which introduces a territorial protection for each team. A player who has resided in the team’s community for at least the past 36 months could be plucked out of the draft.

Teams can chose not to protect a local player and would be compensated with a draft pick that would occur before the originally scheduled draft begins.

So every team will be able to add a top-seven talent if they have done their homework.

“This is a pretty deep draft this year, and with the protection pick, it means a whole different kind of scenario,” said Porcellato. “It’s kind of exciting.”

New West, which didn’t have its first-round pick due to a long-ago trade, will have some skin in the game thanks to the option of either protecting a local talent or a compensatory pick.

Teams must submit their decision – a local protected graduating player or none selected – by Feb. 1.

As he scans his roster, Porcellato is pleased with the offensive depth, thanks to the sticks of Mitch Jones, Keegan Bal, Logan Schuss, Jordan McBride, Anthony Malcom and possible returns of Kevin Crowley and Joel McCready.

The re-commitments of the latter two would be a major plus in the team’s goal of challenging for a WLA playoff title, noted the GM.

McCready sat out last season due to knee surgery, but has resumed his National Lacrosse League career, counting three goals over three games with the Vancouver Warriors. Crowley, meanwhile, leads the NLL in scoring as a member of the Philadelphia Wings.

On defence, the ’Bellies will need to replace the sizeable hole left with the one-year work-related sabbatical taken by first-year firefighter Brett Mydske. A 2019 WLA second team all-star, the 31-year-old has been a stabilizing force on the back end, as well as a team leader.

“You can’t just straight-up fill in for a player like (Mydske). He’s a six-foot-five all-star, so we need to make sure we address part of that,” said Porcellato.

Among the talent graduating from the junior ranks this year are Coquitlam juniors Dennon Armstrong, Reid Bowering and Philip Buque – the younger brother of New West goalie Alexis –  and Victoria’s Zach Manns, junior Salmonbellie Tre Leclaire (but a Delta native, so not protection eligible), Langley’s Ryan Martel and Nathaniel Kozevnikov.

This year’s proceedings could see a shift in the balance of power in the league, as both Coquitlam and Langley account for 11 of the first 21 picks, and have already been accumulating early draft picks in years prior. Maple Ridge and Victoria, meanwhile, combine for just one pick in the three rounds following the compensatory round.

Due to a series of past trades, the ’Bellies won’t select again until 19th overall.

Porcellato said he continues to work aggressively at bolstering the roster for a long 2020 season.

“I think we’re ready to win and maybe only a couple of significant pieces from being with (three-times defending Mann Cup champion) Peterborough,” he added. “I’m excited, definitely. We’re making calls and talking with players who can make us a stronger team.”

The WLA draft is Feb. 6 at the Langley Events Centre, and will be broadcast online at www.wlalacrosse.com.