'Bellies run over before it began 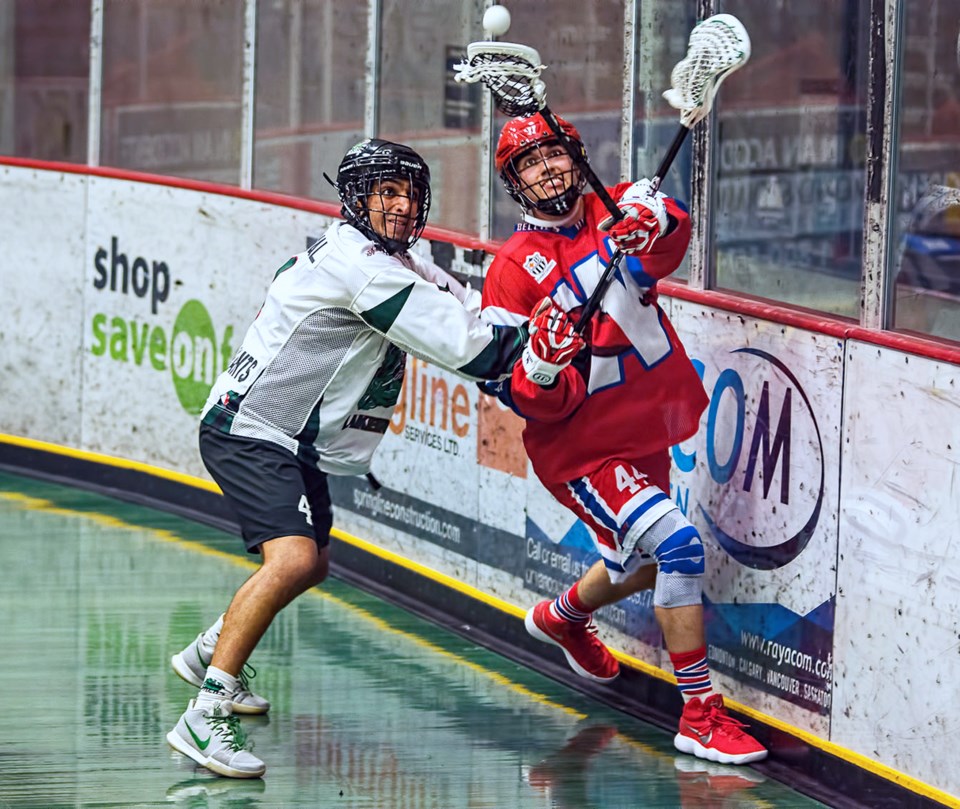 New Westminster saw its season preempted Wednesday in a disappointing 10-7 loss to Maple Ridge. Regular season champions, the Salmonbellies were swept 4-0 by the upstart Burrards and now face a long hiatus until next season.

It's an old sports cliche, but it never was truer than Wednesday in Maple Ridge.

Despite establishing a dominating regular season en route to the Western Lacrosse Association title, the New Westminster Salmonbellies saw their season ended in a shocking 4-0 sweep, following a 10-7 loss to the Maple Ridge Burrards.

First versus fourth proved once again that in the playoffs 'It's a whole new season.'

Playing with their backs to the wall after on Wednesday, the 'Bellies were feisty and energized to start the game. Maple Ridge, who had out-scored the favoured rivals 36-20 over the first three games, also played with cautious purpose, making for a tight opening 20 minutes. Trailing 2-1 to start the second, New West turned it up and created a number of good scoring opportunities, with Jason Jones tying the game 2:57 into the period. Just 34 seconds later, Mike Messenger stepped into the Burrards zone and buried a high shot behind Frank Scigliano to put the 'Bellies ahead 3-2.

That set a tone that lasted, oh, about two minutes. Maple Ridge responded with rapid fire, connecting on a shorthanded two-on-one by Ben McIntosh, and then a few minutes later reclaimed the lead on Riley Loewen's second of the night.

It turned on the taps, as the determined underdogs powered to a 7-3 advantage, including a pair of markers, Loewen and Aaron Davis, just seven seconds apart.

Did I say it had all the earmarks of a long, physical affair?

The Burrards, after building a solid but not formidable edge, witnessed some desperation on New West's part when they mounted some of their best pressure late in the second, firing 10 consecutive shots at Scigliano, with Curtis Hodgson and Jordan McBride scoring.

But the third period was more like the first, where the game became more a chess match, with each team strategizing for the best scoring chance possible, than a fire-wagon assault.

"It's a tough pill to swallow at this time. Everyone likes to win, and we won here last year," noted New West president and general manager Dan Richardson of the team's dramatic Game 7 overtime victory 12 months ago. "We dug ourselves a hole (after losses of 13-5 and 11-5 in the opening two games) and our compete level the last two games was pretty good. Maple Ridge is a good team, you tip your hat to them, but I don't think we brought our 'A' game, especially not the first two games.

"This is not what we envisioned. We certainly had some glimpses of the team we put together, but it wasn't enough."

Offensively, the ’Bellies were no match for Maple Ridge’s explosiveness, and had difficulty creating a corresponding consistent attack.

“We just couldn’t get that momentum or our offensive sets weren’t as crisp as they were down the stretch. Maybe that tells us what we need to do,” said Richardson.

New West had claimed the regular season banner with a 15-3-0 record, including winning all three games against the Burrards.

Having rode a third-place finish last year to the Mann Cup championship series, the 'Bellies may have felt like they were victims of a sucker punch. The Burrards, however, never fielded a full roster during the regular season, have one of the sharpest coaches in Rob Williams, and only in the past few weeks put superstar Curtis Dickson and sharpshooter Ben McIntosh in the same lineup at the same time. Coupled with some yeoman work from the supporting cast, winning the specialty teams battles by a 10-to-2 margin (in powerplay goals scored), and the standout performance by Scigliano, and there's a recipe for an upset right there.

The playoffs are a whole new season indeed.

Maple Ridge now awaits the winner of the Victoria-Nanaimo series, which the Shamrocks lead 3-1, with Game 5 going Friday in Victoria.

Former Canuck Ryan Kesler opens up about the problem of painkillers in the NHL in TSN report
Sep 25, 2020 9:55 AM
Comments
We welcome your feedback and encourage you to share your thoughts. We ask that you be respectful of others and their points of view, refrain from personal attacks and stay on topic. To learn about our commenting policies and how we moderate, please read our Community Guidelines.