In response to the current pandemic that has seen sports across the globe cancelled over the COVID-19 virus, B.C. School Sports (BCSS) announced Monday that the spring season of play has been suspended indefinitely.
Mar 18, 2020 11:09 AM By: New West Record 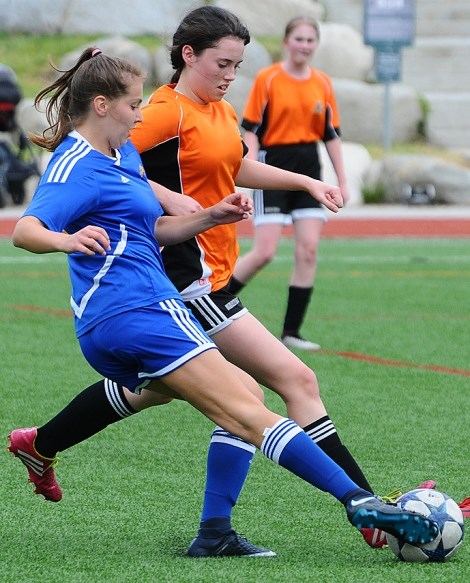 The New Westminster Hyacks senior girls soccer team won't be playing any games soon, as the spring school sports season has been put on hold due to concerns over the spread of the COVID-19 virus.Cindy Goodman/North Shore News

In response to the current pandemic that has seen sports across the globe cancelled over the COVID-19 virus, B.C. School Sports (BCSS) announced Monday that the spring season of play has been suspended indefinitely.
Prior to Tuesday’s announcement from the provincial government that shuttered B.C. schools until further notice, BCSS issued a notice to all coaches and athletic directors.
The memorandum, sent to all BCSS members from its board of directors, directed that all activities related to school sports, including training, practices, jamborees, scrimmages, matches and inter- and intra-school sports activities, were to cease.
“We recognize that schools across the province are out on spring break for the next one or two weeks, but note that many train or compete with their school team during spring break. … All school sports activities, including those noted above, are to remain cancelled until further notice from B.C. School Sports,” the memorandum stated.
“Due to the speed at which things are changing, we will evaluate the situation moving forward, and determine the ability to safely offer a spring season of play at a later date.”
That decision involves all spring sports, including girls soccer, rugby, badminton, track and field, golf, ball hockey, netball, tennis, ultimate and volleyball.
The scheduled BCSS annual general meeting, scheduled for April 18 to 19, has also been suspended. The board is looking at potential dates in June but will wait for guidance from provincial health authorities before proceeding.
The Burnaby-New West spring season began a couple of weeks ago. The senior girls soccer season got off to a bang for both Alpha and Burnaby Central.
New Westminster and Burnaby North also won a pair of games each.

BCJALL to showcase players in special summer tournament
Jun 8, 2021 9:10 AM