New video series highlights the dangers of working in commercial kitchens
Sep 15, 2018 6:07 AM By: Staff Reporter 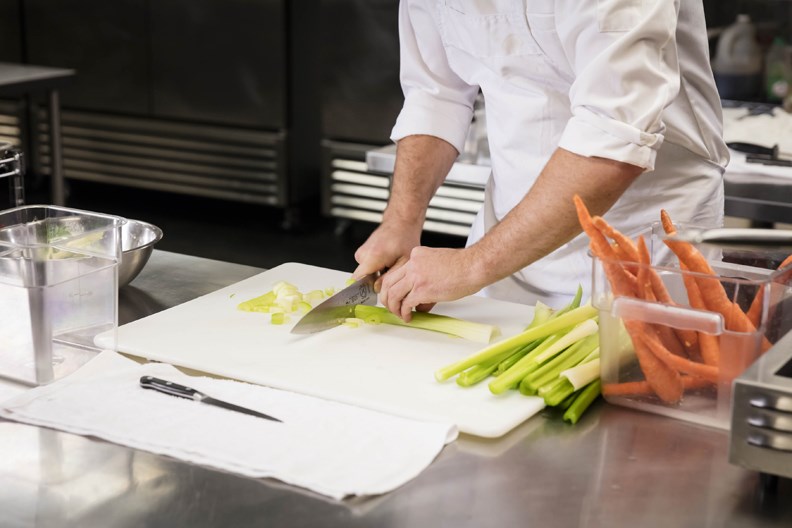 In 2017, a chef working in a New Westminster pub died in a kitchen-related accident.

The blade of a meat slicer at the pub needed sharpening and while that was being done, the sharpener, called a sharpening assembly - a separate piece that attaches to the moving blade while sharpening - was taken off to be cleaned, according to WorkSafeBC’s magazine. Meanwhile, one of the pub’s chefs went to reach for a container on a shelf above the moving blade and fell onto the slicer. He was taken to hospital but did not survive his injuries, according to WorkSafeBC.

That’s the general message of a new video campaign by WorkSafeBC.

Around 97,000 people in B.C. work in kitchens, as chefs, cooks, food-counter attendants and helpers. They can be found in workplaces spanning many industries ­— from restaurants and pubs to institutional kitchens, from remote work camps to mobile catering.

That’s why WorkSafeBC partnered with go2HR and well-known local chefs to produce the video series for employers and workers about the safe use of knives, meat slicers and deep fryers, and how to prevent burns, scalds, slips, trips, falls and lifting injuries.

“Commercial kitchens have the potential to be a recipe for risk,” says Lisa Houle, Manager, Industry and Labour Services, at WorkSafeBC, in a news release. “They contain lots of sharp, heavy, hot objects; the pace of work is demanding; and they have high employee turnover, so there’s a constant need for training. These videos provide tips from experienced industry professionals that even the home cook will find useful.”

Isabel Chung, executive chef at the Fairmont Chateau Whistler, is featured in the series, along with Dennis Green (executive chef, go2HR), Cindy Hamilton (owner, Mom’s Grilled Cheese Truck), and Jeff Szombaty (executive chef, Hyatt Regency; formerly Vancouver, currently Waikiki, Hawaii). “Safety’s always been a consideration in the kitchen,” Chung says. “From a young employee’s point of view, if your employer won’t listen to you, they’re not worth working for.”

Employers are responsible under the Occupational Health and Safety Regulation to ensure workers are trained and know how to carry out all aspects of their job safely. These videos are a free educational resource that will be made available in several languages.

You can view all of the videos atworksafebc.com/kitchensafety

673
New West sees big jump in COVID-19 cases
333
A cafe helping people in need says pay what you can
263
Opinion: Now NIMBYs are whining about shadows from new housing
223
Filming in New West: A bright spot in a challenging year
178
New West athlete remembered for her zest for life