A coalition of New Westminster residents is urging the city to consider the housing needs of residents today – and in the future.
Nov 17, 2016 3:11 PM By: Theresa Mcmanus 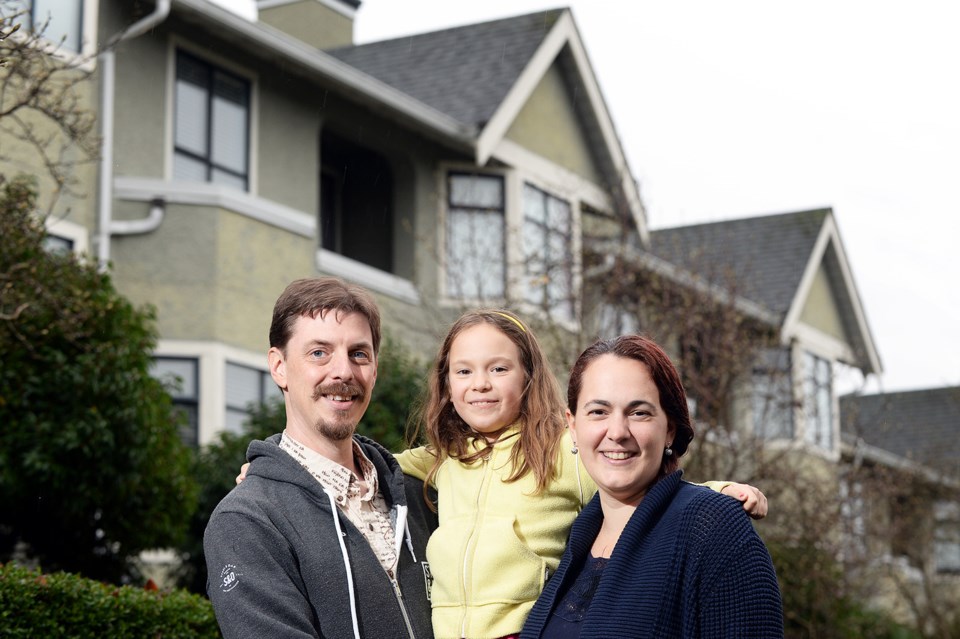 Still missing in the middle?: Brad and Alice Cavanagh and their daughter Elizabeth consider themselves lucky to have found a townhouse in New West. Like other members of the Yes In New West coalition, they’re disappointed city council isn’t allowing “the missing middle” in a section of Glenbrook North.

A coalition of New Westminster residents is urging the city to consider the housing needs of residents today – and in the future.

Yes in New West is calling on city hall to expand housing options in neighbourhoods across the city by allowing more row houses, townhouses and carriage and laneway houses.

“New West, like Metro Vancouver, has a housing affordability problem,” said Brow of the Hill resident Brad Cavanagh. “The benchmark price for a single-family home in New West is over $1 million. To qualify for a mortgage on a million-dollar house, your family needs an income of at least $170,000, and that’s after you put down your $200,000 down payment.”

Although Cavanagh and his wife Alice both have fairly good-paying jobs, he said they had no way of saving up for a $200,000 down payment after paying child-care costs. They rented an apartment and lived in a housing co-op, but they feared home ownership was a “distant dream” because of housing prices.

“Buying a single-family house in New West was completely impossible,” he said. “Luckily for us, we found a townhouse for sale, not quite a year ago.”

Supply is another issue, said Cavanagh, noting a recent search revealed just 13 townhouses up for sale in New Westminster. Of those, five were under construction in Queensborough, three were in adult-only buildings, leaving five for families with children.

“For families like mine who would like a little more outdoor space than a condo can offer, the current situation is bleak,” he said. “Try and bid on the rare townhouse that comes up for sale and you competing against a dozen offers, win the lottery, or move out of New Westminster – those are our choices.”

A recent staff report on the latest round of consultation for the official community plan update indicated that some residents feel “the missing middle is still missing” from the plan and support infill everywhere, not just around main streets. The missing middle refers to housing types such duplexes, fourplexes – housing that’s somewhere between single-family homes and apartments.

“There were a number of participants that were concerned about the city allowing further growth. People were concerned about the impacts this growth may have, such as overcrowding, increased traffic and an increased demand for infrastructure, schools and community facilities,” said a staff report. “Despite this, the stronger message was that even more needed to be done by the land-use map to accommodate growth and to achieve a better mix of housing.”

Yes In New West is calling on city council to support a staff recommendation that would permit townhouses in the 500 block of Fifth Street and to add more townhouse designations on quiet streets near transit corridors.

City staff is taking recent feedback from council and working on the next draft of the land-use designation map and the first draft of the official community plan. The city is planning to accommodate a population of up to 104,000 residents by 2041 – that’s 34,000 more residents than there were in the city in 2011, which means about 16,500 new homes will be required in New Westminster.

With 95 per cent of the city’s current housing stock in single-detached dwellings and apartments or condo buildings, the city is seeking to increase hosing choice by encouraging more ground-oriented housing forms.

* Christa MacArthur, who has lived and worked in downtown New Westminster for the past two-and-a-half years, said her five-year-old daughter told her she wants to “live on a street with little houses so she can get some peace and quiet.”

“It seems that strata-titled housing is only available near loud trains or busy arterial roads,” she said. “Why must people living in apartments, townhouses or condos be subjected to constant noise and traffic? We also desire tree-lined streets and neighbourhood parks. The problem is that a variety of housing types in quiet walkable neighbourhood is badly needed but is not being accommodated.”

* Mike Folka, a fourth generation New Westminsterite, said he and his wife Julie experienced the challenge of finding family-friendly, ground-oriented housing in his hometown, when the third of their three boys was born.

“A large portion of New Westminster’s housing stock is made up of either single-family homes or condo buildings. We don’t have much offer in between, but with a little luck and some good timing, we were able to find an affordable, three-level stacked townhome in the very same Glenbrook North neighborhood I myself grew up in,” he said. “I won’t hesitate to say we got lucky. There are many other young families who haven’t been.”

Adds Folka: “I fear that my kids and others may be forced out of the community they grew up in and not by choice, is very real, one we are already seeing happen today.”

* Jonathan Gibson, who rents a condo in downtown New West with his wife, said more people are entering the condo market as they’re being priced out of the single-family homes. Although more rental buildings are being built, he doesn’t think the supply of rental units will be enough to keep rents affordable in future years.

“If the city chooses not to provide more diverse housing choices at an affordable level, this OCP risks forming a New Westminster by 2041 that is no more than a gated community,” he said. “Does the city and council choose to endorse this exclusivity, rather than containing the vibrant community values of inclusion and acceptance? I believe we can and should aspire to be an inclusive community and that this includes the way we plan for future housing forms.”

* Rick Vugteveen, who lives in a detached house in the Brow of the Hill neighbourhood, doesn’t think the city has to sacrifice character by allowing “gentle densification” in residential neighbourhoods.

“The missing middle works alongside single-family homes,” he said. “We can create policies that protects what makes our city unique.”

“I am seeing family after family leave New Westminster for the suburbs to the east because they cannot find appropriate housing for the size of their families,” he said.