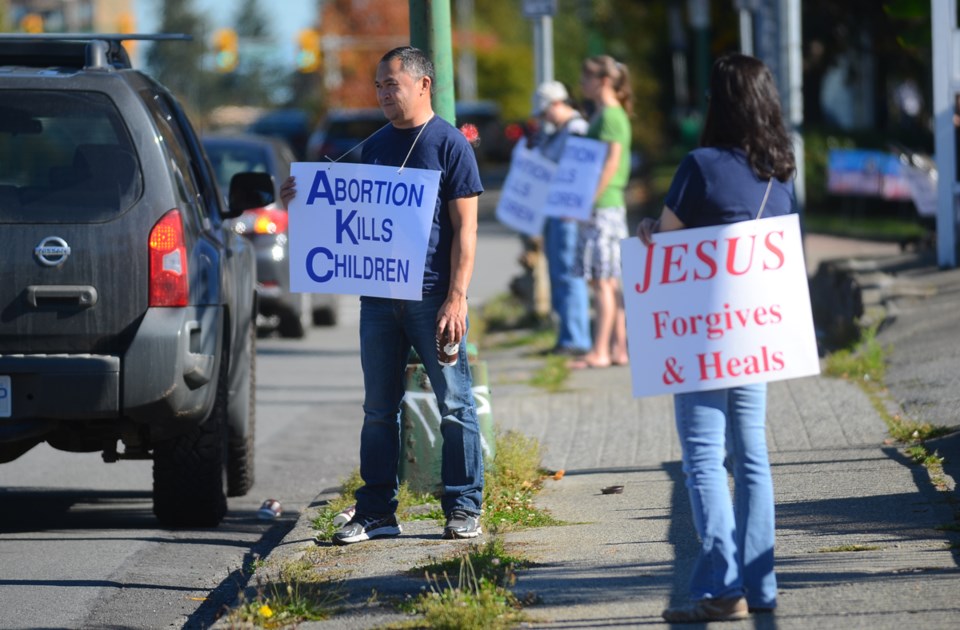 Anti-abortion protesters lined Kingsway in Burnaby in October 2015 for a Life Chain event. Some New West residents are expressing concern about groups that have been displaying graphic abortion images on posters on local streets.

Rebecca Ninkovic was waiting to cross the street at Eighth and Carnarvon streets last weekend when she was confronted by a giant poster showing graphic imagery of an aborted fetus. She was unable to get past the large poster on the sidewalk.

“It was only inches from my face,” she told council Monday night. “I was instantly triggered. I struggle with mental health, and I have complex PTSD. I have been working very hard on my recovery. This encounter instantly interrupted my personal sphere and forced me to look at a highly disturbing image that I would have chosen to avoid had I been given the choice.”

While it appears there is very little police can do to address the issue, Ninkovic asked council to reassess city bylaws related to the display of graphic imagery that obstructs the use of public streets and sidewalks and exposes children and other community members to traumatic, triggering experiences.

“The protesters proclaimed freedom of speech and human rights rhetoric when I engaged with them regarding the damaging images they were using,” she said. “I was deeply disturbed even further when a little girl around the age of my own seven-year-old daughter was staring in horror and disbelief at the image. I quickly jumped in front of her gaze and told her to guard her eyes and look away.”

Ninkovic said it was traumatizing for her to view the graphic poster, as she was forced to view similar images as part of her own fundamentalist religious upbringing in the pro-life movement.

“From a young age, I was exposed to these images,” she said. “It took many years of therapy to undo the damaging effects of these unwanted images that cause severe psychological distress. Scientific studies show how these negative images affect our brains.”

Ninkovic believes freedom of expression is extremely important, but only to the extent that it doesn’t cause harm to another person.

“I believe this is a public health and safety issue,” she said.

Ninkovic hopes the city will take preventative action to protect people from being exposed to these types of graphic images on city streets, so residents don’t have to counter the campaign that’s underway in New Westminster.

“This wave of anti-abortion protests – they have a campaign. It’s all across Canada and beyond. These groups are focused on New West, particularly one of them,” she said. “They are amping up; they are just getting started.”

Mayor Jonathan Cote said council was aware of a previous campaign that included anti-abortion mailouts and posters in the community.

“Obviously things have ramped up in terms of the more public things when it comes to graphic imagery that you are talking about here,” he said. “I think we will definitely be referring this back to staff to present council with more options on how local governments can look into this.”

Coun. Chinu Das said there is a movement afoot across Canada to promote pro-life. She suggested the city should look at efforts being undertaken in other cities that are facing similar campaigns.

“Let’s look at what other municipalities are doing and see if there is a way we can address this,” she said. “I do think the target of this movement is to ramp it up in every municipality.

Council referred the issue to staff.

2551
Luxurious residences are setting a new standard of living in Langley
311
New West now grappling with second big COVID-19 outbreak
251
Opinion: This protest in front of NWSS against an affordable housing project is ridiculous
219
New West rapid access clinic opens as 'safe way to get sober'
208
UPDATE: Here's where you could be able to buy cannabis in New West