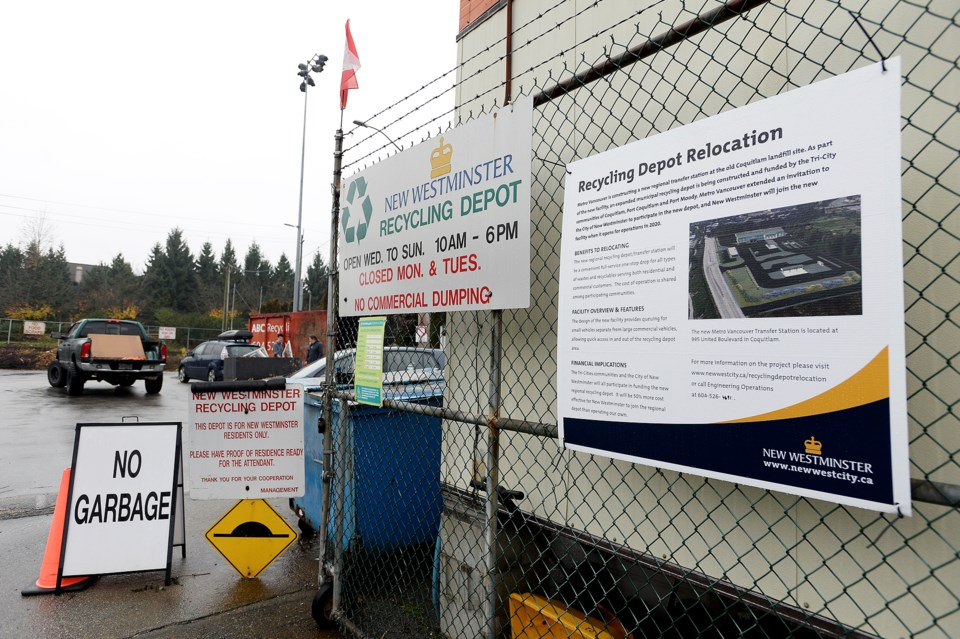 There may be three Rs when it comes to waste management, but one of those Rs rose to the top of the heap in New West in 2019.

The City of New Westminster’s decision to close the recycling depot was an issue that didn’t diminish as the year progressed – it was a topic that was recycled again and again and again – through letters to the editor, online petitions and comments on social media. Whether you agreed or disagreed with the city’s decision, it was a topic that folks continue to talk about – and that’s why the New Westminster recycling depot is the Record’s Story of the Year.

Citizens soon started expressing concerns about the plan – and about the fact council made the decision with no real consultation or a discussion about alternatives. The city’s plan for a new aquatic and community centre facility on the site don’t include space for a recycling depot.

As 2019 drew to a close, more than 1,200 people had signed an online petition opposing the plan and urging the city to keep the facility open.

The city stated the regional facility on United Boulevard would result in cost savings to city coffers and would provide community members with a one-stop-shop where they could recycle most products, something that didn’t sit well with community members who were already more-than-happy about being able to recycle everything from yard waste to glass to batteries to plastic at the current depot in New Westminster.

Despite some citizens’ concerns about the plan, Mayor Jonathan Cote stands by the city’s decision to partner on a regional facility. He admits the city underestimated the passion that a lot of residents have for the facility.

“I think we missed that passion and love for the existing facility that is out there in the community,” he told the Record in November. “I think we need to own that and be able to respond and engage with the community in that conversation.”

In October, Coun. Chinu Das said the closure of the recycling depot had been the top issue she’d heard about from residents since the October 2018 election.

Daniel Fontaine, who spearheaded the online petition at the request of a fellow citizen, said the city may have been able to find another location for a recycling depot in the city if it had consulted with the community. He said the recycling depot is valued service among many citizens, but it’s also a place where they feel a sense of community.

“There are certain things within our community that bring us together – you can probably name the Top 10 of them. And in an odd, quirky little way, that recycling depot is one of them. It’s funny,” he said. “People have an emotional connection to it. … It’s just part of the community, and it’s a way for people to directly feel like they are doing something to help the environment and to do their part to recycle goods that would otherwise go in the dump.”

As the outcry continued from some citizens, city officials and supporters of council’s decision stressed that “recycling” should be the last resort for the three Rs and suggested residents should focus on reducing and reusing.

Will the closure of the local recycling depot make citizens more aware of the need to reduce and reuse? Will folks take their recyclables to other places around town, such as London Drugs, that offer recycling? Will the city’s pop-up recycling events meet the recycling demand until the regional facility opens? Will people even bother to go to the periodic pop-up events or will they already have placed those items in the garbage? Will the amount of goods going into the garbage increase if people can’t be bothered to find new places to recycle around town or make the trek to Coquitlam?

660
New West sees big jump in COVID-19 cases
330
A cafe helping people in need says pay what you can
247
Opinion: Now NIMBYs are whining about shadows from new housing
217
Filming in New West: A bright spot in a challenging year
174
New West athlete remembered for her zest for life