What does future hold for Hyack?

The dust hasn’t settled as the in-fighting continues, but at least one city councillor says it may be time for the city to step in and help clean up the Hyack Festival Association’s mess before the events it hosts suffer. Coun.
Oct 24, 2013 3:43 PM By: Niki Hope 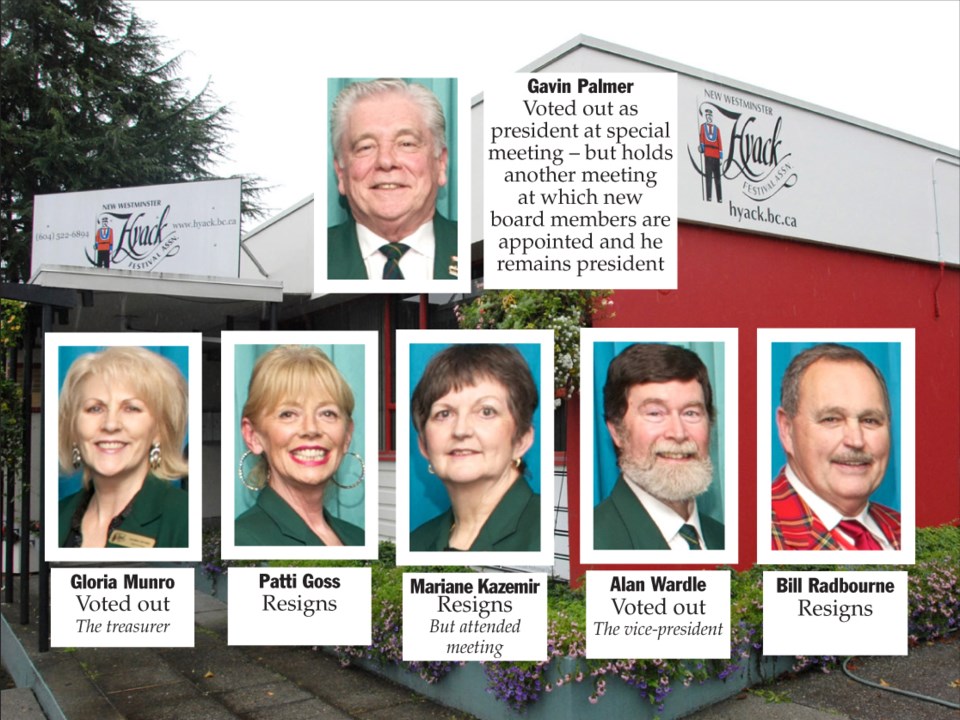 The dust hasn’t settled as the in-fighting continues, but at least one city councillor says it may be time for the city to step in and help clean up the Hyack Festival Association’s mess before the events it hosts suffer.

Coun. Chuck Puchmayr said he is putting forward a proposal to deal with the Hyack situation next week – just days before the Nov. 1 deadline for the city’s grant applications.

“It is troubling, especially in view of the fact that there are some statutory timely events that are in jeopardy,” said Puchmayr. “Well certainly the Christmas parade is at risk. I don’t believe there are any permits applied for. The (Business Improvement Area) isn’t aware of anything. It’s absolutely at risk.”

The Hyack discussion may be in a closed meeting, because it may involve personnel, he said.

But it is time to talk.

“I think the citizens deserve council to take a serious look at how we deliver these events that everyone still wants us to deliver,” he said.

The former MLA said he and others on council chose to stand back from the Hyack dust-up and hold off as long as they could to allow the organization to resolve its internal dispute, but

after Tuesday night’s meeting, where a group of members met and voted out president Gavin Palmer, vice-president Alan Wardle and treasurer Gloria Munro, it may be time to weigh in.

The Hyack dispute has been ongoing since July 31, when Palmer and his supporters fired former executive director Douglas Smith without the knowledge of the board.

Smith was later rehired but eventually left with a wrongful dismissal settlement. Two Hyack sponsors – the Uptown Property Group and Royal City Centre – dropped their support in the wake of his departure.

Palmer and his supporters didn’t attend the Tuesday night meeting because he had cancelled it after learning that five Hyack board directors resigned the same day the meeting was scheduled to take place.

Nonetheless, approximately 25 people turned up to the meeting and went ahead with the vote to drop the three Hyack board executives and raise the organization’s borrowing limit from $25,000 to $100,000.

Hyack owns its headquarters at 204 Sixth St. It rents to five tenants in the building, according to a source who didn’t want to be identified.

According to the same source, Hyack has a legacy fund with about $350,000, which earns about $14,000 a year in interest. Hyack treasurer Gloria Munro could not be reached to confirm these figures.

Meanwhile, Puchmayr said he is asking staff to look into Hyack’s financial history.

“I know that there is some legacy money (that) was put aside back quite a few years ago. I’m even told that there was tax levy that was applied to start the legacy fund, and so we need to have a look at that and we need to have a look at the original constitution to see where that stands. I’m not saying Hyack will be disbanded,” he said. “I’m saying at this time, we need to look at those providing those events that seem to be at risk. We need to look at the history and get a good understanding of what that means and if it does mean anything coming to the city or not.”

Mayor Wayne Wright also said he maintained his distance from the drama but became concerned when he heard “one of the best parliamentarians in the province” had walked away from helping the organization because of how it was being managed.

A letter from five Hyack directors who resigned Tuesday said the registered parliamentarian quit because of “repeated interference and unilateral and illegitimate actions by the president, Gavin Palmer.”

“People have hired this man to facilitate and use his parliamentary skills, and then he has to walk away because they aren’t doing it properly,” Wright said. “I think they’re not out of the woods for quite some time, quite frankly., because neither side is talking, and I don’t know which side is right or wrong.

“Quite frankly, it’s very uneasy to have something like this going on in the city because it makes people look foolish,” Wright said.

Ron Unger, one of the group of five who resigned from the board, maintains that after Tuesday night’s meeting Palmer, Wardle and Munro are no longer on the Hyack executive and there aren’t enough board members remaining to run Hyack according to its constitution.

“That’s the thing, it’s completely broken,” said Unger, who believes it is time for the city to step in and take over operations.

“We are a service organization. The city basically allows and gives money to Hyack to run in the city,” Unger said. “As its biggest funder, … it’s appropriate for the city to step in and provide some direction and guidance.”

Unger said he wants the “turmoil” to end.

“The city deserves to have great events,” he said.

Palmer disputes the legitimacy of the Tuesday night meeting, where he was voted out and still considers himself president of Hyack.

He said the situation at Hyack has “nothing to do with the city.”

“We get grant money from the city. The city puts money in Fraser River Discovery Centre, they don’t take over looking after that,” Palmer said.

To fill the vacancies left by the five resignations, Peter Goodwin, Glen Richmond, Gerda Suess and Ken McIntosh  (whose wife Betty McIntosh is a city councillor) were appointed to the board, says a press release issued by Palmer.

The new board has established a financial advisory committee “to assure the continuation of its 42 years (sic) success record.”

The press release promises that Santa Claus will come to town in the annual Hyack Santa Claus Parade of Lights, which will go on with the help of sponsorship from Key West Ford, the release states.

While the parade might go on, it seems the behind-the-scenes drama isn’t over yet either.

The real answer on Hyack’s future might not come until the city announces its grants in January.