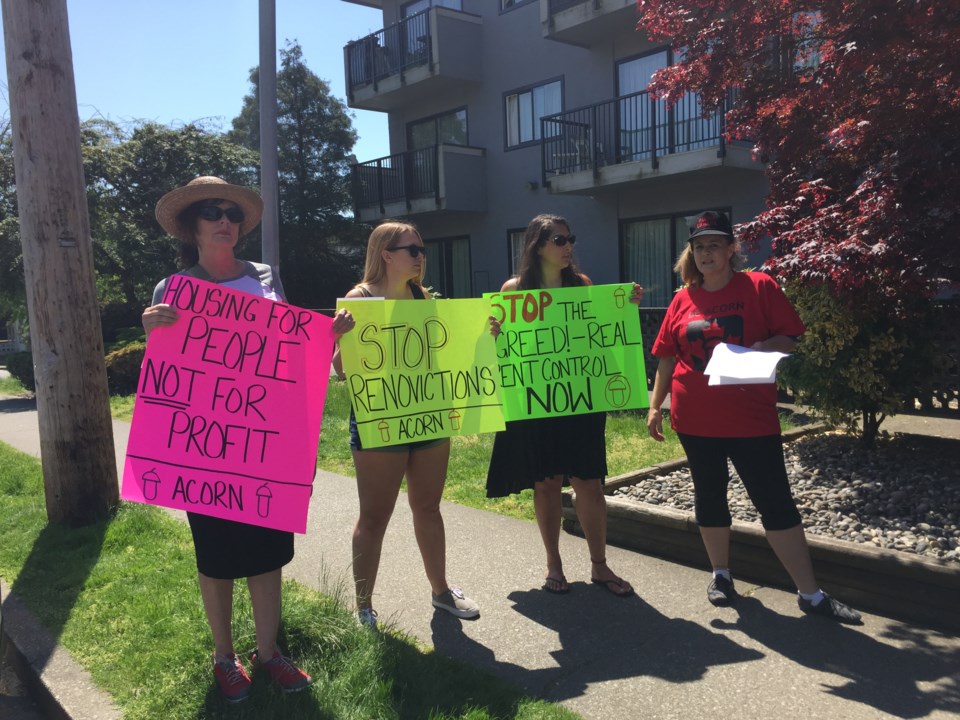 About 40 people, including members of B.C. ACORN and residents of Lori Ann Apartment on Seventh Street, attended a May 15 rally in front of the building.Renovictions have become a growing concern for tenants in older rental buildings in New Westminster.

The Vancouver Tenants Association wants to help New Westminster tenants who may be facing renovictions.

The group is inviting community members to attend a meeting about renovictions on Sunday, Aug. 19 from 2 to 4 p.m. at St. Barnabas Church, 1010 Fifth Ave.

“Our strategy is to try, without being alarmist, to let people know and get people understanding their rights before they start receiving eviction notices because when that happens people understandably get very panicked and scared, and start scrambling around for other housing,” said David Hendry, an organizer with the Vancouver Tenants Union. “Sometimes the companies file eviction notices that don’t have very good grounds, and they basically try to get as many people out as possible, even when they don’t have a very good case for it.”

The group has been doing a lot of work around renovictions in Vancouver and Surrey, but recently made contact with a resident of an Ash Street building who was being renovicted.

While tenants in some buildings have already received eviction notices, tenants in other buildings are concerned they’ll soon meet the same fate.

The Vancouver Tenants Union advises tenants not to move out or to sign anything if they get eviction notices.

“Their main tactic is to use fear to scare people into leaving. There are ways to fight renoviction and to keep you in your homes,” said a notice about the Aug. 19 meeting. “The whole neighbourhood is experiencing this crisis – it’s time to get to know your neighbours and help each other fight for what you need.”

Hendry said some tenants in the Uptown/Brow of the Hill neighbourhood are paying $800 to $1,000 per month in rent. He said a Seventh Street building that’s been renovated is now charging $1,400 for a bachelor suite.

“People are in a really tough spot,” he said.

Politicians from municipal, provincial and federal levels of government have been invited to attend the meeting.

“That is what we are going to talk about – the number of buildings that have been for sale, what those companies believe they can get for rents and what the rents are currently. There is such a huge gap there,” Hendry said. “People that are in those buildings, they are not going to have anywhere else to go in New West.”

The Vancouver Tenants Union fights for the rights of tenants and the preservation of affordable housing, and demands real rent control, eviction protections, more affordable housing and better incomes for all.

John Stark, the city’s acting manager of planning, said the city is aware of 10 buildings and 215 units where renovictions have occurred in New Westminster in the past three years. The numbers were based on statistics as of June 6.

“There may be renovictions that the city is not aware of – renovictions done without permits and where no complaints were filed with the city – so this number is likely an underestimate,” he said in an email to the Record. “These numbers are based on renovictions where there is evidence that the renoviction has actually occurred (building permit issued, etc.). The numbers of potential future renovictions or rumoured threats of renovictions would likely be much higher.”