A symbol of the colonial era will likely take up residence in the city’s work yard until it finds a new home.
May 7, 2019 7:14 AM By: Staff Reporter 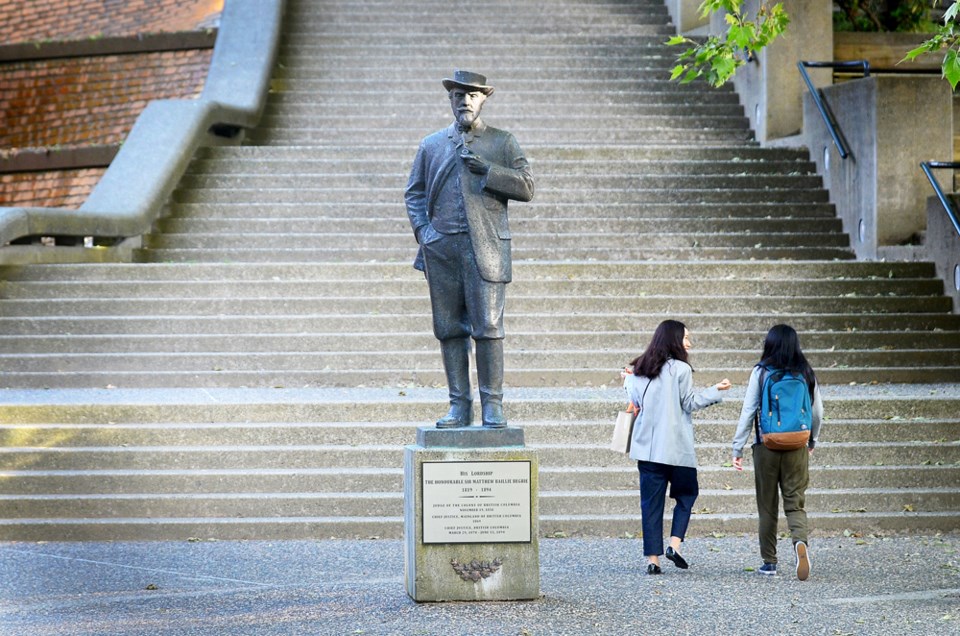 Having removed the Judge Begbie statue from Begbie Square in July, city council is now poised to consider a motion that would see Begbie Square (shown here, in front of the law courts on Carnarvon Street) and Begbie Street in downtown New West renamed Chief Ahan Square and Chief Ahan Street.

A symbol of the colonial era will likely take up residence in the city’s work yard until it finds a new home.

On Monday, city council voted 4-2 in favour of removing the Judge Begbie statue from in front of the provincial courthouse on Carnarvon Street. The city will also: engage in a conversation with the Tŝilhqot’in Nation about the history and legacy of Judge Begbie and the effects his decisions had on generations of their people; work with the city’s museum and archives, the community and the Tŝilhqot’in Nation to find an appropriate place for the statue; and engage in a process of consultation to find an appropriate place to tell the history of the Chilcotin War.

“This motion does the opposite of erasing history. It provides an opportunity to tell the whole history, including the voices and perspectives of the Indigenous people,” said Coun. Nadine Nakagawa, who put forward the motion. “We have to ask ourselves: What perspective is history told from? When we defend this history, we are defending the rights of the colonial narrative to be the only perspective that’s told.”

Nakagawa said the city needs to respond to a request by the Tŝilhqot’in chiefs in 2017 to remove all namesakes of Judge Matthew Baillie Begbie, who was the first chief justice of the Colony of British Columbia. As it stands, she said the statue does not provide any context on who Begbie was, so the motion provides an opportunity to tell more about who Begbie was, both the good and the bad.

“Having public statues shows not only a reflection of our past but also a vision of the future of our community. We know that Indigenous people are overrepresented on all the negative statistics: suicide rates, overdose, homelessness and the criminal justice system. What message are we sending to Indigenous people in our community?”

In 1864, Begbie presided over a murder trial in Quesnel of five Tŝilhqot’in chiefs who were found guilty and sentenced to hang. The following year, a sixth chief, Chief Ahan, was tried, convicted and sentenced to death in New Westminster – in a spot not far from where the statue stands.

In 2014, the provincial government apologized to the Tŝilhqot’in Nation for the wrongful execution of the six chiefs. In 2018, the federal government fully exonerated the chiefs of any wrongdoing.

“These were actually chiefs, they would be like premiers of provinces in a nation. Say we went to war with Alberta, Saskatchewan, Manitoba, Ontario, Quebec and Nova Scotia, and then we decided we wanted to have some peace talks and we brought those six premiers to British Columbia to have peace talks, but when they crossed our border we arrested them, shackled them, tried them and executed them. Would that judge still be standing in a courtyard somewhere in British Columbia? Would there be reconciliation to that injustice more rapidly than now?” said Coun. Chuck Puchmayr. “The time has come. This has to happen.”

Puchmayr said the statue is on city land and will likely be placed in the works yard until a decision is made where it should go. He hopes it can be moved before July 18, when a Tŝilhqot’in delegation will visit New Westminster to commemorate Ahan’s execution, which occurred about 150 metres away from the statue.

“When that delegation came down the last time – there were about 30 of them – they stood right there with their back to Begbie while they were looking over and drumming where their chief was executed,” he said. “They all commented on it. They were all uncomfortable with that.”

The six chiefs of the Tŝilhqot’in National Government have not written to the city requesting the removal of the statue, but Puchmayr said it’s something they support.

“They all were unanimous that the statue had to be moved,” said Puchmayr, who has met with the chiefs. “None of them ruled out the possibility of doing some kind of a learning piece with the statue after the fact.”

In a 4-2 vote, council voted in favour of removing the statue. Councillors Nakagawa, Puchmayr, Jaimie McEvoy and Mary Trentadue supported the motion, while councillors Chinu Das and Patrick Johnstone voted against it. (Mayor Jonathan Cote was out of town.)

Johnstone and Das said they fully support truth and reconciliation but feel more dialogue should take place before the statue is moved, including with the Tŝilhqot’in Nation. (In addition to eight delegations at Monday’s meeting, many people commented about the issue on social media in response to news coverage about the motion to be considered by council.)

“I frankly don’t thing we have had these conversations in this community. I think we have spent a weekend on social media and we have spent a couple of hours in this chamber having a discussion about this subject. I don’t think we have truly engaged with people who need to be engaged in this discussion,” Johnstone said. “I am afraid actions we take now are going to undermine our efforts to have that true engagement. We are going to close those ears before we have even invited them in to have a conversation.”

“I want my kids to learn the names and faces of people to aspire to be like, who fought injustice, who were honourable people and were admired in their communities,” said Tasha Henderson. “They need to know and understand the history of how we got here, but they do not need to glorify men like Judge Begbie.”

Some residents said Begbie was actually considered to be quite progressive at the time, noting he spoke several languages (including Chinook) and allowed people of other cultures to swear an oath of truth on objects sacred to them rather than the bible. They suggested council table the motion and allow the statue to remain in place until more consultations take place with community members.

“What bothers me about the current motion is that it is divisive... I think that is not the right path for the City of New Westminster to go,” said David Brett. “Personally, my view is that the true path to truth and reconciliation is by honouring all stories, everyone’s. All cultures have a story. I think it’s important that we look at those stories and we tell them together.”