Surrey gets its police board with chief to follow, a year behind schedule

Minister of Public Safety and Solicitor General Mike Farnworth has appointed seven members to the City of Surrey’s new police board.
Jun 29, 2020 3:46 PM By: Graeme Wood 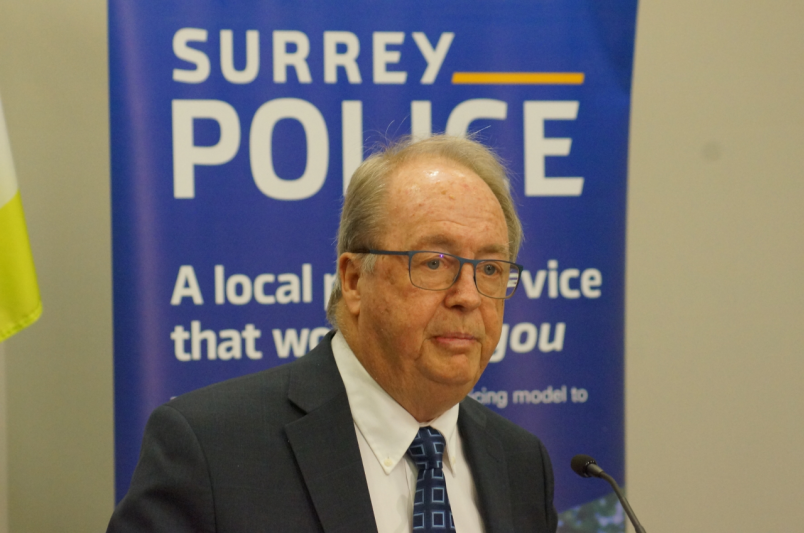 Surrey Mayor Doug McCallum. One year after previously scheduled, a new Surrey police board has been named. The police chief, once hired by the board by September, will have seven months to hire over 800 officers, plus administrative staff

Minister of Public Safety and Solicitor General Mike Farnworth has appointed seven members to the City of Surrey’s new police board, which will be roughly one year behind schedule in hiring a new chief.

These nine board members, outside the mayor, will have terms ranging from 12-18 months.
“The next step in the City of Surrey's $45 million transition plan will be for the new board to hire a chief constable. Ministry staff will work with the board to assist in the transition process, including providing an orientation and training session in the coming weeks,” according to a statement from Farnworth’s office on Monday.

McCallum said the first board meeting is expected in early August. A consulting firm will look at possible police chief candidates, he said, and it will provide a short-list to a board committee. McCallum said a new chief is expected to be named by September.

McCallum indicated to media the transition is on schedule.

The board will start hiring officers by the end of September and McCallum maintained his previous assertion there will be a “dual force” for some months, from the previously planned launch of April 2021.

McCallum thanked Farnworth at a Monday afternoon online press conference, adding the new department will be an “innovative, modern and proactive police service that is tailor made for Surrey.”

“I think policing, literally, in North America is changing as we speak.”

He said the new force would be oriented toward listening to the city’s different communities and cultures. He said the new officers would reflect the cultural diversity of Surrey.

“We have a golden opportunity to change the way policing is done,” he said.

McCallum maintained the city’s annual taxes will “reflect” the consumer price index in order to pay for the police transition.

The 2018 election promise to transition the police force while not raising taxes beyond CPI has resulted in austerity budgets, however. The city has slashed spending elsewhere, cancelling and delaying new civic facilities.

McCallum has also frozen new police officer hiring (for Surrey RCMP) over the past two years, citing the transition. It’s unclear if the city will see a third year of hiring freezes.

The planned transition costs have also been questioned. A significant cost to the new police force is a new IT system. The city’s June 2018 transition report claims the city may be able to use the old RCMP system, to save upwards of $20 million, as compared to creating a new IT system. Other expert estimates peg the additional costs of Surrey creating its own IT system at $32.5 million.

When asked if he would prefer to use the RCMP system or have a new system for the Surrey Police Department, McCallum said he wanted the “best” system.

“We might just use the RCMP equipment but that is to be determined. I can tell you, we want the best that’s available because this is a brand new, very innovative and proactive police service and we need to have the best equipment available,” said McCallum.

“I look forward to hearing the specific details on what the transition from the RCMP to a municipal police force will look like. These details and the timeline will be negotiated by Public Safety Canada and the Surrey Police Board.

“The RCMP is a contract service provider in Surrey and, as such, we do not have a role in the decision-making process for this transition. However, we do have a role in this community. We police Surrey with passion, skill and experience, and we have many strong partnerships here that have been developed over many decades. We will continue to police Surrey with pride for as long as we are contracted to do so.

Under the Police Act, via oversight by the director of police services, the board has four main governance functions: Employing the police and civilian employees; providing financial oversight for the police department; establishing policies and directions for the department; and managing service and policy complaints against the department.