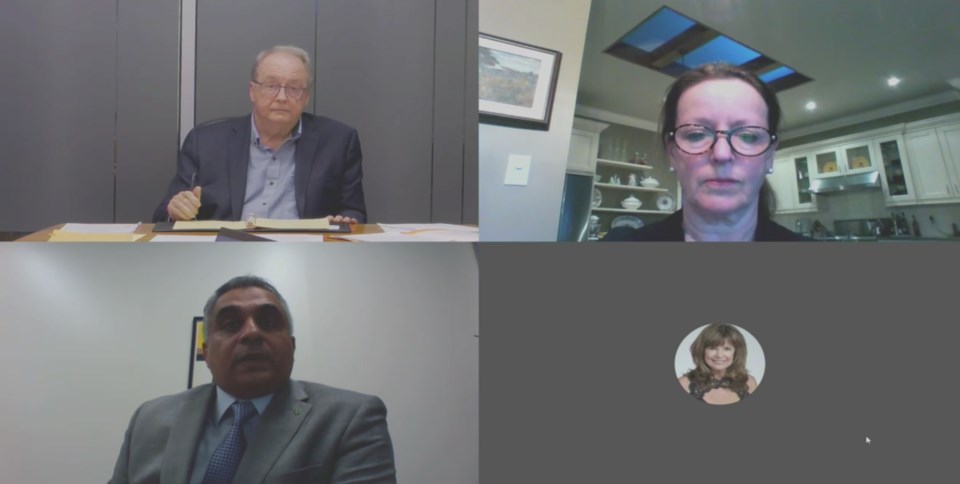 A video council meeting for the City of Surrey proceeded Monday night not unlike most regular meetings, save for some usual shouting by residents from the public chamber — typically concerning the municipality’s ongoing police force transition.

Mayor Doug McCallum, as the meeting’s chair, first proceeded quickly through a series of development-related final readings; he disallowed opposition members of council a number of notices of motion; they challenged him; there was some argument; the four other council members in McCallum’s slate said next to nothing; and the bi-monthly meeting concluded in under an hour.

Amid the fray was a declined notice of motion to defer property taxes, as Surrey residents look for answers from their local leaders in the midst of global pandemic unrest.

With no resulting debate on the matter, McCallum told council expanding property tax deferrals rests with the provincial government during the state of emergency.

“I have said publicly that the city would like to move the deferment program three months, the same as we did with the utility taxes.”

However, TransLink, Metro Vancouver and the school board need to be on board, said McCallum, because the total tax bill includes payments to those entities.

“All those agencies have to agree before we can move it because they’re all tied together.”

“Deferring property taxes until December is the least we can do under the circumstances. It might mean we’ll have to tighten our belt at city hall for a few months, but I think Surrey’s families and businesses are worth it,” Annis said Monday via email.

But, said McCallum, the city has applied to have its own property taxes deferred, as he hinted he has been working with city hall officials outside of any official council-led initiative.

“I will say to you,” McCallum told Coun. Jack Hundial during the meeting, “we will give you an answer back on your comments and so forth and give you, or all of council, give you a report on where we are at when we’re dealing with the province and exactly what we’re asking.”

Another notice of motion, from Coun. Brenda Locke, also did not proceed to discussion.
Locke asked for council to have all non-essential city project work be paused until there is a better understanding of the fiscal implications of the COVID-19 pandemic.

“This includes, but is not limited to, the police transition,” said Locke.

“I won’t allow that either,” said McCallum, “because we’re already dealing with it. First of all, we have our police force; we have a budget for it that’s been approved by council, a unanimous motion by council for our own police force.”

Locke tried to challenge the chair but McCallum said that was not proper procedure. The mayor, McCallum asserted, can block a notice of motion from proceeding and challenges may only occur on votes.

As McCallum’s use of authority as the meetings’ chair has become an ongoing theme in council chambers, argument ensued over the video feed.

“Councillor Locke, we just passed a code of ethics. You should read it to understand your role as a councillor,” McCallum said after Locke persisted (inaudibly).

“That’s a little insulting even within the code,” Hundial told McCallum. “You can’t really say that even under the code. You can’t be belittling other people on council.”

McCallum then put the matter to a vote anyway and won 5-4.

McCallum also denied a third motion when Hundial tabled a suggestion to extend temporary use permits without businesses having to reapply.

The meeting continued and McCallum reassured his audience over the internet (surrey.ca) that all is fine.

“I just came off a conference call with the 10 largest cities’ mayors across Canada,” said McCallum. “All of us are watching our finances very, very carefully, but I would say Surrey is in the best shape of any city across Canada at this stage as far as budgets, and being able to handle the costs of money so far to this state that this virus has caused us in this city.”

McCallum said a contingency is in place.

However, the mayor’s assertion that Surrey is in a good financial position and can maintain its service levels and future capital projects, including the police transition, raises questions given the city operates with relatively few reserves and high debt.

Surrey recorded total expenses of $788 million in 2018, according to its most recent consolidated financial statement. Vancouver recorded about double that with $1.6 billion in expenses.

Yet, Surrey has just $82 million in reserves, whereas Vancouver has $1.28 billion. It’s understood some of the reserves municipalities maintain are designated to a particular expense and thus may not be liquid depending on whether a council decides to create a new bylaw to move money between accounts. It may also be possible for the provincial government to amend the Local Government Act during these unprecedented times in order to make reserves more liquid.

Meanwhile, Vancouver has already stated it is expecting at least a $200 million hole punched in its revenue this year.

Surrey also has more debt than any other B.C. city governed by the Local Government Act. The city will spend $8.1 million servicing debt this year.

McCallum said financial reports have been provided to council members.

To date, McCallum and the city have declined to speak to Glacier Media about the city’s financial forecast.

2495
Luxurious residences are setting a new standard of living in Langley
311
New West now grappling with second big COVID-19 outbreak
251
Opinion: This protest in front of NWSS against an affordable housing project is ridiculous
219
New West rapid access clinic opens as 'safe way to get sober'
206
UPDATE: Here's where you could be able to buy cannabis in New West