The three-term mayor says underinvesting in cities comes with great peril; Canadians need to be better at understanding one another
Feb 12, 2020 4:07 PM By: Graeme Wood 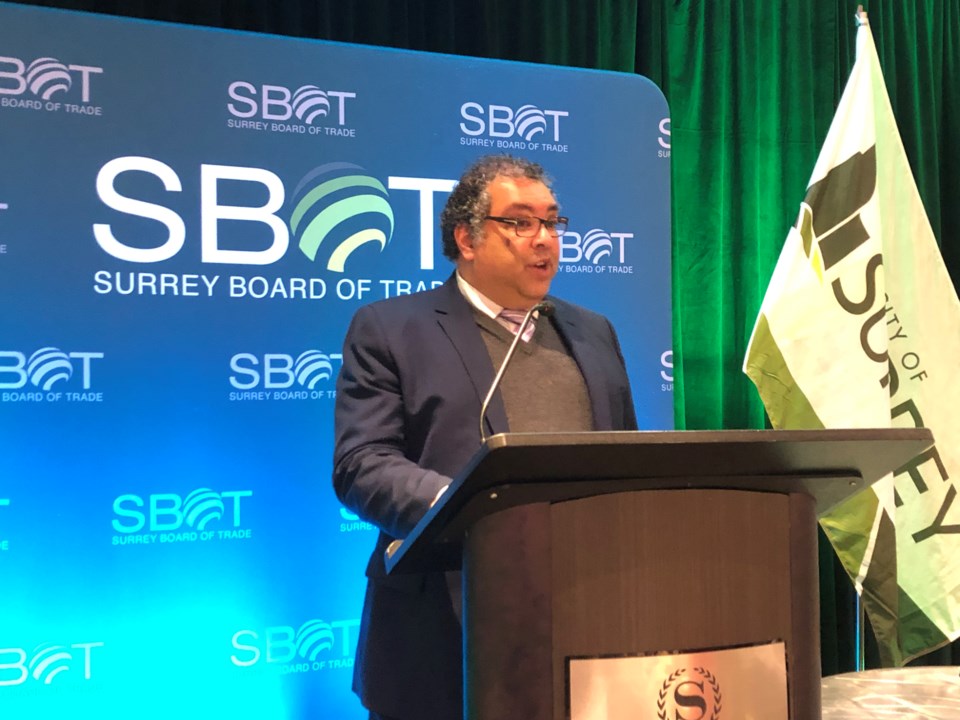 “I have three pages on our LRT investment, so I’ll just skip over that now,” said Nenshi, who was asked to speak to Surrey’ business community about the political, economic and social challenges of municipal infrastructure and local wealth creation.

“The point is, you should be focused on rapid transit investments, and Surrey is,” said Nenshi, referring to the LRT replacement SkyTrain line that will better serve regional transportation needs compared with the intra-municipal benefits of LRT.

Nenshi’s appearance contrasts with an ongoing rift between the board’s CEO Anita Huberman and Surrey Mayor Doug McCallum – a matter Nenshi seemed acutely aware of as he stopped here while touring Canadian cities this week on speaking engagements.

“I told a joke in Toronto and Mayor John [Tory] didn’t think it was funny.

Mayor Doug’s not here so I may be able to get away with it here,” said Nenshi in concluding his speech.

The cancellation of a Guildford-Newton inner city LRT line by McCallum and his once eight-strong Safe Surrey Coalition was the first of many public disagreements between city hall and the board.

Since the November 2018 municipal election, Huberman has been championing immediate transportation and infrastructure improvements for Surrey.

“We absolutely need transit and transportation investments in Surrey and South of the Fraser,” Huberman said to open the luncheon. “We can’t wait until 2050; we need it now.”

To date, the cause has been frustrated. The SkyTrain line to Langley will move more people and do it faster than LRT; however, half of its funding remains in limbo.

Meanwhile, Surrey’s road-dependent workforce is facing a delayed George Massey Tunnel replacement project, and a replacement Pattullo Bridge will not add any more lanes. As well, Huberman and McCallum are at odds over ride hailing, with the latter opposing its introduction on Surrey’s streets. The new council also axed a one per cent road levy to address road improvements in growing neighbourhoods where rush hour commutes are increasingly coming to a standstill.

Successive municipal governments over the past 20 years in Surrey have kept the city’s tax rates at the very low end of the region.

To that end, Nenshi spoke to how Calgary faced underinvestment from governments prior to his now 10-year run at city hall.

“I was looking at the criticism the board of trade had of the Surrey municipal budget. And in fact what I saw was a very thoughtful critique that said listen, don’t just cut our taxes, invest in arts and culture, invest in the river front, invest in things that are going to make business work in this nation,” said Nenshi, whose council raised property taxes significantly in his first term to fund LRT expansion.

As one who has had his own fair share of controversies at council level, Nenshi edged around ongoing political controversies in Surrey.

He started his speech with a tale about how Calgary was formed by an enterprising people.

“People came to the land to love, greet and sometimes fight. Sounds like my city council meeting, except the love.”

He then acknowledged two of McCallum’s opponents on council seated directly in front of him, Couns. Linda Annis and Brenda Locke.

“Is that what your city council meetings are like?” he said, pointing to Annis and Locke’s table, as the crowd laughed.

Nenshi then spoke about the need for democratic lawmakers to reverse course on a growing trend of “irresponsible” public discourse.

“We’re in a position of polarization, dehumanization and belittling times.”

Nenshi is in favour of the Trans Mountain pipeline and said Canadians have a difficult time understanding those from other regions, including Alberta.

“Ultimately we are selling off a polluting resource at fire sale prices,” he said. “It doesn’t meet the needs on climate…and it impoverishes us.

“Our one and only customer [the U.S.] is also our largest competitor.”

Addressing climate change, “which is real,” he says, while maintaining economic prosperity is the biggest challenge of the day in the face of divisive politics, Nenshi asserted. He said he and Albertans take exception to other Canadians labelling Albertans as climate change deniers in a way that “celebrates Alberta’s struggles.”

Huberman asked Nenshi about the notion of Western separatism, or “Wexit.”

“Otherwise thoughtful people are saying thoughtless things,” he said, calling the idea of an Alberta nation state “insane” and “wackadoodle.”

“Irresponsible talk from politicians has consequences,” Nenshi said. “We have to put a lid on this.

“It’s really important that other Canadians understand how to deal with this.”

He added pragmatism must win the day and energy projects must not be tied up in symbolism, one way or another.

Joking again, he called for “Calexit” if Alberta ever did separate.

A social progressive, Nenshi, the first Muslim mayor of a major North American city, said his key “cornerstone” in his third term is to address an action plan to improve mental health and combat addiction.

“I’m not proud of the successes we’ve had on homelessness,” said Nenshi, claiming while many impoverished people have been helped, those who have been left behind are “more desperate than ever.”