The Supreme Court of British Columbia has upheld a bylaw aimed at discouraging renovictions in New Westminster.
Feb 11, 2020 4:37 PM By: Theresa Mcmanus 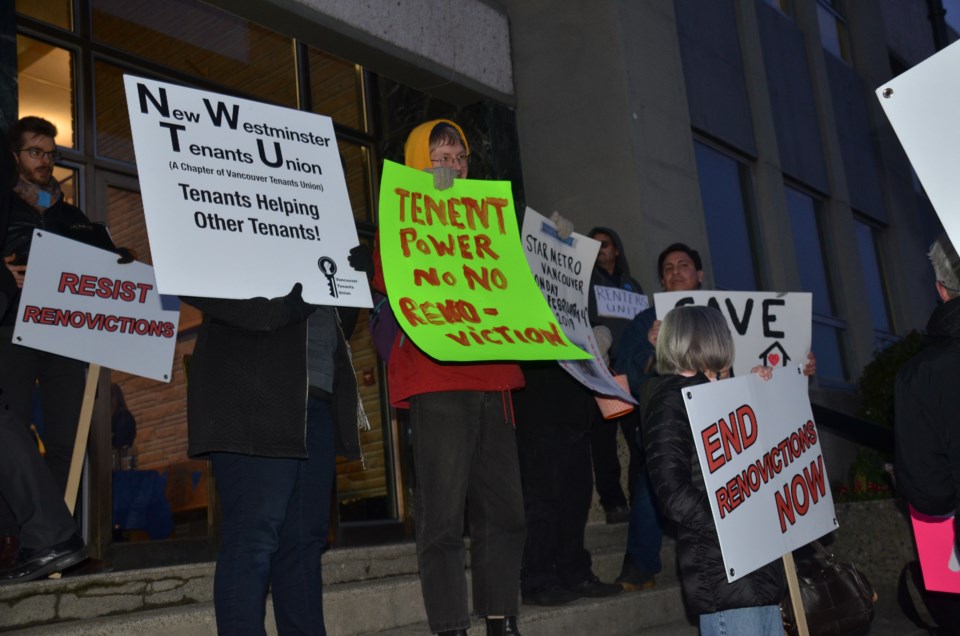 Tenants filled city hall in February 2019 to support the city's plan to amending its business regulation and licensing (rental units) bylaw to make it harder - and more expensive - for multi-unit building owners to evict tenants.Theresa McManus

The Supreme Court of British Columbia has upheld a bylaw aimed at discouraging renovictions in New Westminster.

In early 2019, city council approved amendments to the business regulations and licensing (rental units) bylaw that would add new regulations to restrict evictions. This included instances in which they can be considered, provisions for temporary accommodations for tenants in cases when evictions are deemed necessary, provisions to prohibit increases in rents after renovations are done, punishments for contravening the bylaw, and when exemptions would be considered.

In addition to revoking the business licences of multi-family rental property owners who don’t comply with the bylaw, the city established fines of $500 and $1,000 for evicting tenants without permits, evicting without relocating tenants, failing to provide a relocation agreement or providing relocation documentation and implementing an excessive rent increase.

While tenants and tenants’ rights activists lauded the city’s efforts to combat renoviction, others weren’t keen in the proposal and filed a petition with the Supreme Court in July 2019 to have the bylaw amendment declared invalid.

“I am very pleased with this decision,” Mayor Jonathan Cote said in the press release. “Renovictions contribute to housing insecurity in our community, and with this decision we will continue to move forward with our efforts to protect tenants from the impacts and risks of renovictions.”

In January 2019, city council endorsed the Rental Housing Revitalization Initiative, which includes a number of components aimed at protecting and preserving the existing purpose-built market rental stock in New Westminster. The business regulations and licensing (rental units) bylaw was endorsed as a part of this initiative.

“The city will continue to enforce the business regulations and licensing (rental units) bylaw,” said Emilie Adin, the city’s director of development services. “We continue to prioritize our efforts to protect tenants from renovictions.”