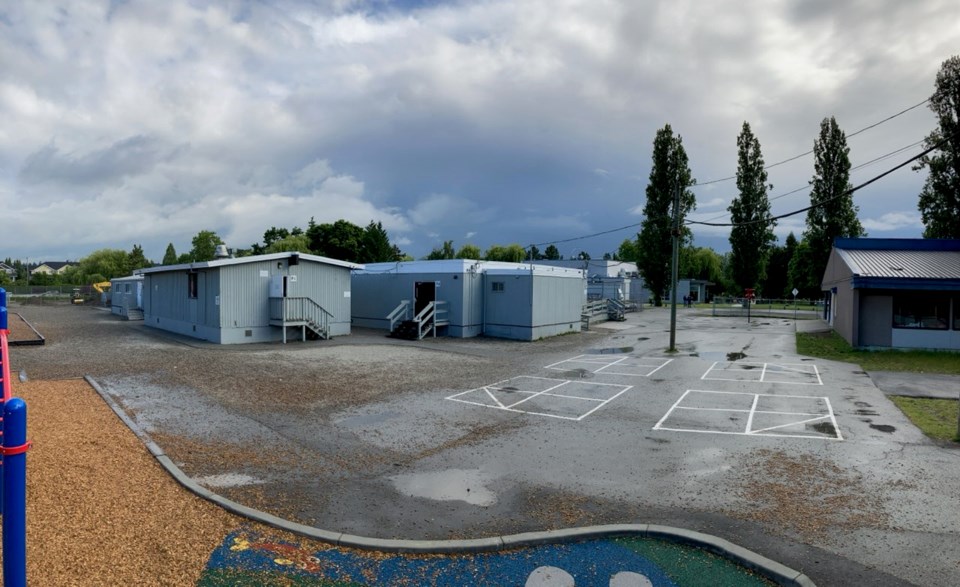 The portables on the grounds at Queen Elizabeth Elementary will soon make way for a 13-classroom expansion. The B.C. government announced funding for a $20-million expansion project on June 10.New Westminster Schools

If you hear the sound of cheering coming from Queensborough today, that’ll be the staff and families of Queen Elizabeth Elementary School.

The New Westminster school district will receive $20.1 million to build 13 new classrooms and child-care space at the school, the B.C. government announced this morning. The 325-student expansion will replace the seven portables that currently occupy the school grounds.

The New Westminster school district will pitch in an additional $250,000.

The Queen Elizabeth expansion had topped the district’s capital project priority list in 2018, when the district had pegged the cost at about $18 million. With today’s funding announcement, construction is expected to begin in the summer of 2022, with the expansion completed in early 2024.

“Our board and district has been working towards this project for some time, to meet the growing needs of the families who depend on our schools. We’re excited to see this announcement that will do so much for the Queensborough community,” said board chair Gurveen Dhaliwal.

Dhaliwal said the inclusion of neighbourhood learning centre space for child care will play a vital role in helping the district to support parents.

“This is such an important investment in our community: one that reflects and responds to some of the significant needs of our growing district and their families,” she said in a government press release.

Bernadette Gourlay, president of the Queen Elizabeth Elementary parent advisory council, extended her appreciation to everyone who advocated to help get the students out of portables and into a school building.

“The expansion means a lot to the families of our growing community, and we look forward to participating in the process,” she said in the release.

Throughout the coming 2021/22 school year, work will be done to move portables to make way for the construction project. The district will also be preparing the design and construction documentation needed to get the project ready to tender for construction.

“As Queensborough grows, the school must do the same,” he said in the release. “The expansion of the school with new classrooms and child-care spaces will give families the comfort of knowing their children are receiving the best care and education we can give them.”