A Port Coquitlam teen is using her passion for painting rocks to bring comfort to premature babies at the NICU at Royal Columbian Hospital, where she herself spent the first three months of her life.
Jan 13, 2021 11:31 AM By: Mario Bartel 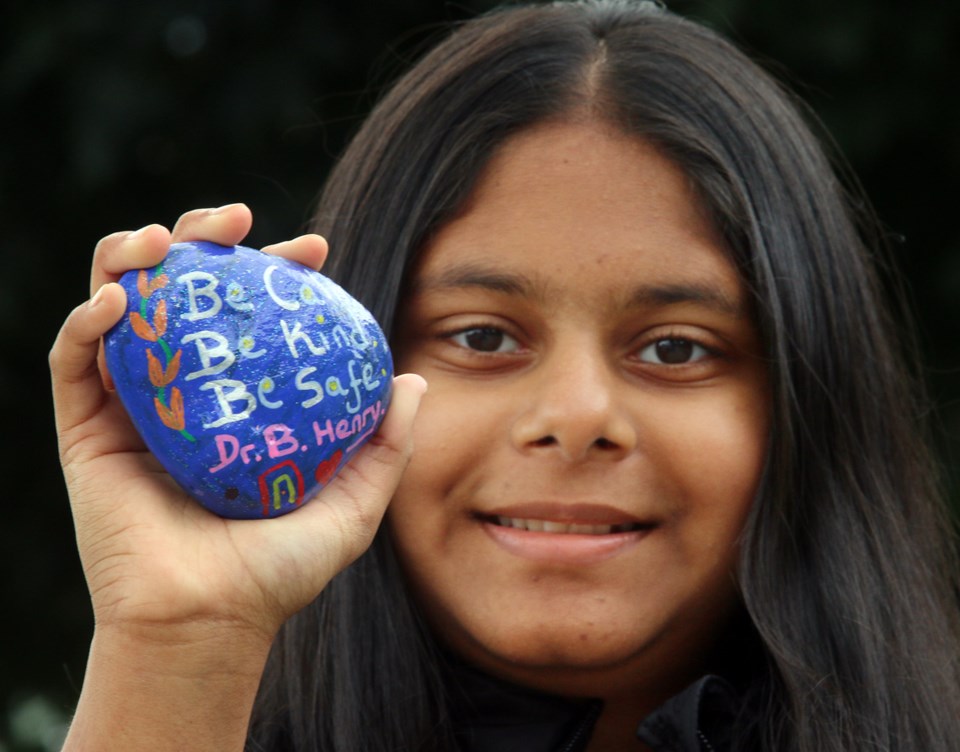 A Port Coquitlam student who has been painting rocks since last summer to help her cope with the anxiety of the COVID-19 pandemic is pushing to bring comfort to others much younger and more fragile.

Insiyah Dharsee is using the funds she’s raised from selling the colourful nuggets to purchase several pairs of surrogate hands parents can use at the Neonatal Intensive Care Unit (NICU) at Royal Columbian Hospital while separated from their premature babies.

Known as Zaky HUGs, the soft, artificial hands cradle premature babies to reassure them of their parents’ touch, weight, scent and warmth — even when they’re in an incubator. They were developed by a Texas mom and engineer who learned about the importance of human touch to NICU babies when a tropical storm knocked out power at her Houston hospital and her preemie son, Zachary, had to be kept alive by touch and artificial respiration until he could be transferred to another hospital with power.

It’s a story not unlike Insiyah’s own — minus the hurricane and power blackout, of course.

She was born four months premature, and weighed only one pound, six ounces. She spent the first three months of her life at Royal Columbian’s NICU under 24-hour care by doctors and nurses as well as her worried parents.

Insiyah’s mom, Rubina, said it was “a very tough” time.

“For the three months that we were there, you can’t process it,” she said. “You go see her, you take a break for lunch and then go back.”

It was while scrubbing down for a visit to her daughter in the NICU that Rubina saw another mom carrying the soft hands to an incubator to place with her baby.

“It was so nice, it was comforting her baby,” Rubina said.

But when she inquired she discovered there was only two sets at RCH.

A frequent visitor to RCH for follow-ups with her doctor, who would inevitably parade her around the NICU to show anxious parents a success story, Insiyah had been painting rocks and accepting donations for various little causes since last summer.

But when her visit to the hospital couldn’t happen because of the COVID-19 pandemic, talking over the implications with her mom and then an online chat with the woman who developed the Zaky HUG gave her art a renewed focus.

Insiyah said she’s painted about 1,000 rocks so far, setting aside time at lunch, after she’s finished her schoolwork or in the evening.

“It helps me feel that I’m doing something for the community,” she said. “I feel really passionate about it.”

So far, Insiyah’s collected more than $2,000 (her goal also got a boost from Rogers Wireless, where her father works). Because of public health restrictions on getting together with other people, she sets aside painted rocks for many of the donations to be collected at a later time. Others just give a few dollars with no expectation of a rock in return. She also dropped off a box of painted rocks at the NICU, to be distributed to parents of preemies.

Insiyah said her goal is to raise $3,125 by Valentine’s day, so she can purchase enough of the Zaky HUGs at $125 a pair for each baby at the NICU.

“I feel like it is my home at the NICU, and I can give back to it,” she said.

• To learn more about Insiyah’s fundraising effort, as well as the Zaky HUG, go to https://insiyah-thezaky.ca.

17608
Pfizer temporarily reduces European deliveries of vaccine
1170
Filming in New West: A bright spot in a challenging year
442
New West athlete remembered for her zest for life
219
UPDATE: Here's where you could be able to buy cannabis in New West
188
Keep those gloves handy: Environment Canada updates winter forecast for Vancouver