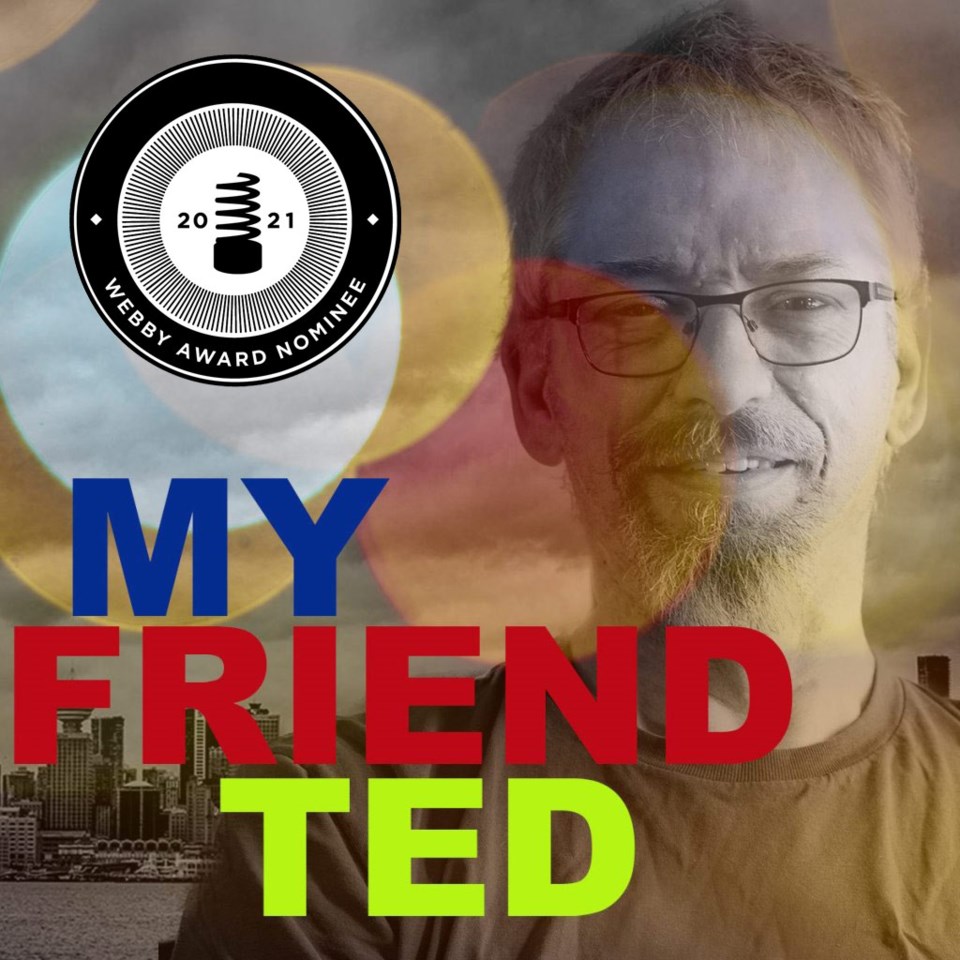 My Friend Ted is up for a Webby award - and you can help by casting a vote online.Contributed

A five-part podcast documentary featuring a New West man’s reflections on life during a battle with ALS is up for an international award.

My Friend Ted is in the running for a People’s Choice Webby Award for Best Podcast Documentary. Ted Stehr, a longtime New West resident, passed away in April 2020, several years after being diagnosed with Amyotrophic Lateral Sclerosis – often known as Lou Gehrig’s disease.

“The People’s Voice Webby Award is determined by the most number of votes from the public. Voting started on April 20 and it ends on May 6, so it’s a short window. Please consider casting a vote for My Friend Ted to win a Webby People’s Voice Award. Anyone can cast a vote, and it’s free,” she told city council Monday night. “This podcast has been singled out as one of five best podcast documentaries in the world in 2021. It is up for a Webby Award in the podcast documentary category. The Webby is a top award in honouring excellence on the internet, so this is really a big deal.”

According to ALS Canada, ALS is a disease that gradually paralyzes people because the brain is no longer able to communicate with the muscles of the body that we are typically able to move at will. Over time, the muscles of the body break down, so people living with ALS will lose the ability to walk, talk, eat, swallow, and eventually breathe.

“Ted would’ve been chuffed and so proud. I can see the huge grin lighting up his face,” his wife Robyn said in a statement read to council. “For Ted and me, creating the podcast was an act of optimism in the face of a terrible terminal disease. Working with Robert gave Ted something to look forward to each week, and their interviews became a vehicle for jokes, reflection and exploring end-of-life questions.”

Stehr  and his friend and media producer Robert Ouimet created the podcast, My Friend Ted, which shares Stehr’s and his family’s journey after his diagnosis.  The five-part series was recorded over the course of a year.

“This nomination is a huge deal, and Ted’s podcast is up against amazing podcast documentaries that cover things like Kamala Harris’s youth, love under pandemic lockdown, just to name a few,” North said. “So, My Friend Ted needs your vote.”

North said the winner will be announced Sunday May 18.

“I am encouraging anyone and everyone to vote and share this request with your friends to Help Ted win a Webby,” North said.

My Friend Ted features five episodes: Do What You Can; Front Loaded; Hope; The Need to Live; and The Lines Behind Me. The final episode was produced just a few days before he died on April 6, 2020 at the age of 57.