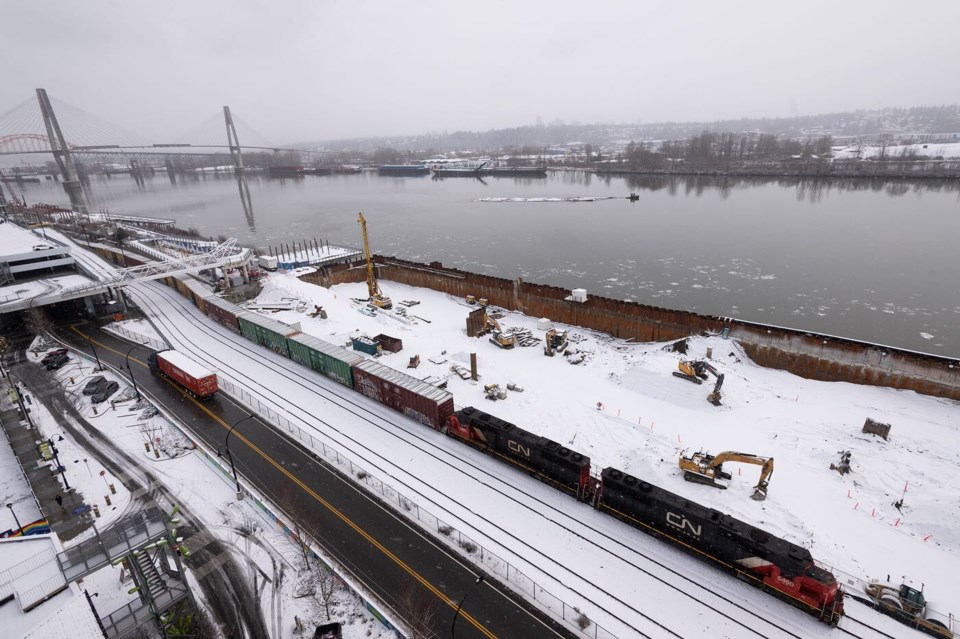 The sound of pile driving will soon be ringing out on New Westminster’s waterfront.

Bosa Development has informed neighbours that it’s getting set to begin pile driving at its Pier West development site at 660 Quayside Dr.

“Starting in March, we will begin installing foundation piles on our site. These piles provide the necessary engineered support for the 53- and 43-storey towers that will be built above,” said a notice distributed to neighbours. “This work will mean periods of increased noise levels on our site for the next six to nine months.”

According to Bosa Development, work will be completed within the city’s permitted construction hours, which is between 7 a.m. and 8 p.m. Monday to Friday and 9 a.m. to 6 p.m. on Saturdays.

“We acknowledge that the upcoming work will create more noise than the work in recent months, and we assure our neighbours that we are using the least disruptive approach to pile driving and are working within the city’s bylaws and regulations,” said Dan Diebolt, the company’s vice-president of development. “Our goal is to start pouring concrete in the summer.”

In February 2019, a representative from Bosa Development appeared before city council to apologize for the impacts that the project’s construction were having on residents and businesses. Many downtown residents had complained about pile-driving noise and vibrations, as well as light intrusion from the Pier West site.

With the upcoming work, Bosa states there will be no use of diesel impact hammers, and piles will be installed by way of vibratory and hydraulic hammers to best mitigate noise.

In 2016, Bosa Properties (unaffiliated with Bosa Development) drew the wrath of downtown residents when doing pile driving as part of the nearby RiverSky development at 1000 Quayside Dr. About 500 new steel piles filled with concrete, ranging from 60 to 90 feet in length, had to be driven into the waterfront site to provide structural stability for the development.

“Our project came on the heels of nearby projects that had used diesel impact hammers, which were something new and disruptive to the surrounding community,” Diebolt said in a statement to the Record. “Understandably, the community had enough disruption by the time we began construction on Pier West, so we launched regular, proactive, two-way communication efforts to listen to the community and respond to concerns. This included Bosa Development altering Pier West’s design, schedule and construction methods at a significant cost to us to find less disruptive methods so we could be good neighbours.”

In response to complaints about pile driving at downtown construction sites, city council approved changes to the hours and types of pile driving allowed in New Westminster. The changes, approved in 2018, didn’t apply to projects that had already been approved, but Bosa Development voluntarily committed to using less disruptive pile-driving techniques.

Emilie Adin, the city’s director of development services, said the city is pleased by Bosa’s efforts to be a “good neighbour” during this major construction project. She said the city and the developer will work together to mitigate any construction concerns as they arise.

“We are aware that Bosa Development has notified the community that they anticipate pile driving noise to occur during normal permitted construction hours over the next six to nine months,” she said. “The city appreciates that Bosa follows a noise vibration mitigation strategy to reduce impacts on its neighbours and – most significantly – has agreed not to use diesel impact hammers.”

According to Adin, Bosa’s building permit application for shoring and excavation work was received prior to July 2018, and it’s not clear that the city could enforce the new provisions of Bylaw 8125.

“A few years ago, we amended Building Bylaw 8125 by putting in place a prohibition against the use of diesel impact hammers over 30,000 foot pounds,” she said.  “This prohibition took effect on March 1, 2019.  However, we have been advised by our solicitor that applications received prior to July 2018 and building permits issued prior to March 2019 are ‘grandfathered’ – meaning that the prohibition against diesel impact hammers does not legally apply to them.”

Adin noted that Bosa has not asked for any variances from the construction noise bylaw for the upcoming round of pile driving.

“The city continues to monitor and to work with developers to mitigate construction noise impacts,” she said. “The city has empathy for local residents and businesses who are affected by construction noise. The city also works hard to support a vibrant local economy and the creation of new community amenities.”

Pier West will include 53- and 43-storey residential towers, a three-storey commercial building with a 40-space child-care facility and retail space, an extension to Westminster Pier Park, pedestrian connections to River Market and Westminster Pier Park, a public plaza and esplanade, surface and underground parking and about two acres of park.

“Bosa Development just completed the unique and complex work of building under water to separate the Fraser River from our site,” Diebolt said, “and now we have begun work on the land where we will be pile driving using vibratory hammers and, when necessary, hydraulic hammers, both of which are less disruptive than diesel impact hammers.”

Bosa Developments posts updates about the project at www.660quaysidedr.com.

1262
Luxurious residences are setting a new standard of living in Langley
447
Here’s where people who are homeless in New West can enjoy a hot shower and get a comfort kit
207
UPDATE: Here's where you could be able to buy cannabis in New West
179
New West now grappling with second big COVID-19 outbreak
69
Opinion: This protest in front of NWSS against an affordable housing project is ridiculous