Opinion: Yo, mega-truckers, stay on the Burnaby-New West truck route where you belong

Look, I appreciate truck drivers and the role they play in society. They get the stuff we want to the places where they can be sold. I know truckers and their vehicles are important.
Oct 17, 2020 9:07 AM By: Chris Campbell 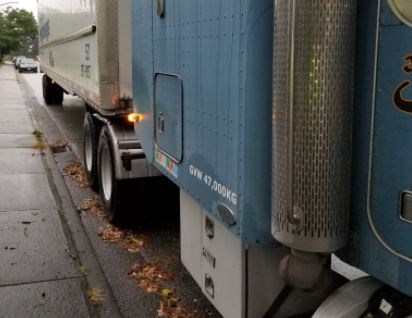 This big rig was caught turning off the designated truck route on the Burnaby-New West border. Burnaby RCMP photo

Look, I appreciate truck drivers and the role they play in society.

They get the stuff we want to the places where they can be sold. I know truckers and their vehicles are important.

But there are rules about where trucks, especially those big rigs, are allowed to go in our community.

There are designated truck routes and these vehicles need to stay on them because some of this ginormous vehicles don’t fit well on certain residential streets.

It’s why the traffic enforcement officers with the Burnaby RCMP teamed up with the New Westminster Police Department and City of Burnaby bylaw officers for an event that targeted large trucks “off the truck route on Cariboo Road at 10th Avenue” on the Burnaby-New Westminster border.

In total, 22 vehicles in violation of the truck route rules were stopped and a whopping 48 tickets were handed out. Seven “unsafe” vehicles out of the 22 were also taken off the road.

As for the photo attached to the top of this story, “This was one of the many large trucks stopped today driving off the truck route,” read a Burnaby RCMP tweet. “Cariboo Road and the intersection of 10th Avenue were not designed to accommodate such large trucks, presenting a hazard to other motorists and pedestrians.”

This truck drivers are supposedly well-trained individuals so they should know where the truck routes are.

I think they do, but they think the rules don’t apply to them.