Opinion: This protest in front of NWSS against an affordable housing project is ridiculous 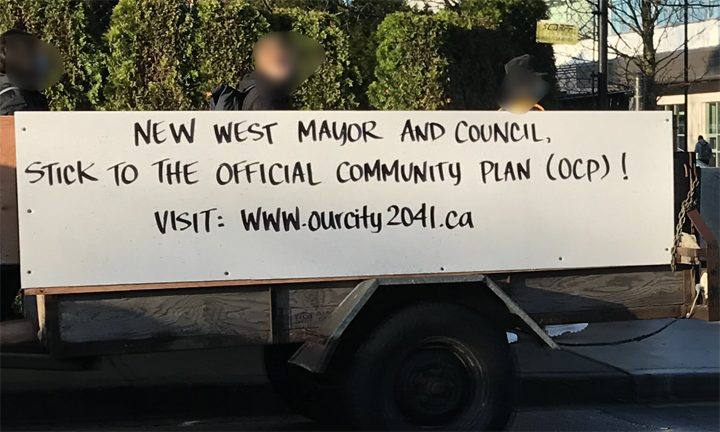 Just look at the photo attached to this blog and imagine what kind of message this sends to the young people in our community.

Someone set up a rickety-looking trailer in front of New Westminster Secondary School Friday morning with a sign protesting a proposed affordable housing development on Sixth Street, across from the school.

It’s ridiculous the lengths some of these project opponents will go to in order to fight what sounds like an amazing proposal.

I’ve detailed some of the silly arguments in previous (like shadows and traffic) columns, but I’m going to mention another one.

And yet, I’ve been hearing from residents all over New Westminster telling me that people oppose the project have been going door to door to rally others to their cause, including signing a petition.

Yeah, that doesn’t make sense, but here were are.

You know who does support the project? The New Westminster school board, which voted recently to back the six-storey, 96-unit apartment building being proposed by the Aboriginal Land Trust, Lu’ma Native Housing Society and Swahili Vision International Association. It would be built on six lots, from 823 to 841 Sixth St.

The project is designed to provide multigenerational, multicultural housing for members of the urban Indigenous and Swahili communities, according to a letter to the school board from the Lu’ma Native Housing Society.

Trustee Maya Russell spoke in favour of the proposed development at the Jan. 26 school board meeting.

“I am excited to see the amount of affordable housing that is planned so close to the school and the fact that it will accommodate families. We know that three-bedroom housing is incredibly hard to find for families,” she said. “And that it’s going to house Indigenous families – many of whom, we’ve heard from our staff, have actually been driven out of our city due to the cost of housing.”

Wow, that sounds like a great location to me.

– with files from Theresa McManus and Julie MacLellan