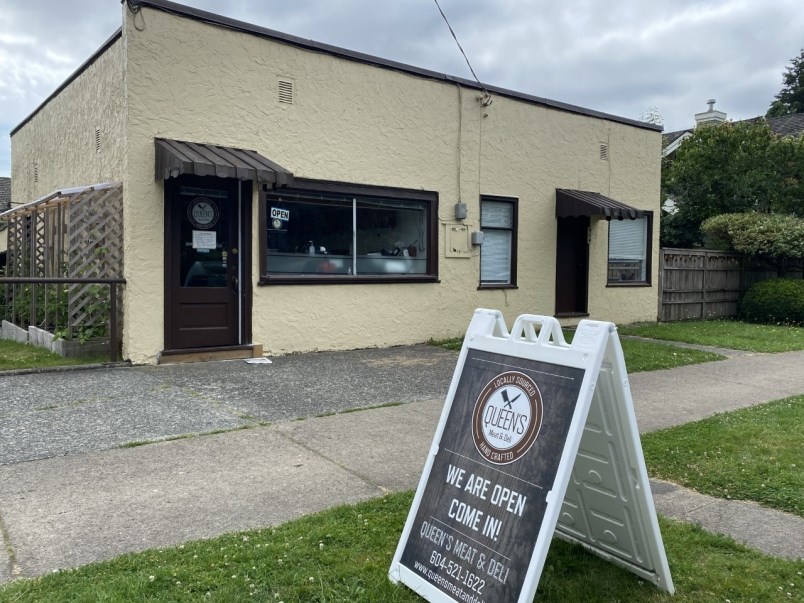 The city has received an application for a heritage revitalization agreement (HRA) for the 1926 building that houses the meat market at 404 Second St. Record file photo

But he won’t dine on just any meat. No, he has scoured Metro Vancouver for the best and says he found it in New Westminster at the Queen’s Park Meat Market.

My friend lives in North Burnaby, by the way, right next to a large grocery store, but has no problem driving to another city – well, before COVID-19 – if it means getting the best meat.

There are other endorsements coming in these days for this business as a public hearing is set to take place next week (Feb. 22) about its plans to expand.

The city has received an application for a heritage revitalization agreement (HRA) for the 1926 building that houses the meat market at 404 Second St. A staff report states that the application is primarily to “regularize and expand the non-conforming commercial use” of the building, thus providing continued viability of a small business.

The plan would allow additional floor space to the existing one-storey building through a 31-square-metre (332-square-feet) side addition, an 18-square-metre (191-square-feet) rear addition and a basement. The project would also require zoning bylaw relaxations related to land use, density, site coverage, setbacks, parking space configuration and signage.

In exchange for the zoning and sign bylaw relaxations, the building would be restored, legally protected through a heritage designation agreement and listed on the city’s heritage register.

“The proposed small-scale local commercial use is consistent with the neighbourhood’s OCP (official community plan) land-use designation. However, the proposal is not aligned with the site’s current RS-4 zoning for residential detached houses. As such, a heritage revitalization agreement is proposed,” said the report. “The site is located in the Queen’s Park heritage conservation area. Regardless of its age, it is not protected due to the non-conforming commercial use.”

From the comments that I have read and letters submitted, the few people who have concerns about the proposal actually love this business. That’s not the issue. It’s about the possible future use of the property if it stops being a butcher shop.

“Pretty much everyone likes the butcher shop. It’s a quirky and unique part of the neighbourhood,” Gail North, president of the Queen’s Park Residents’ Association, told council via Zoom on Nov. 9 2020. “But my thought is that the feedback might have been somewhat different if residents knew they were commenting on a business that could easily turn into something different than the local butcher. I suspect a diner or a convenience store would have elicited some different responses. Other than the folks who had the patience to wade through the hundreds and hundreds of pages in the report for this application, not one person I spoke to had any idea there was a potential for expansion in usage.”

According to a report to council, commercial uses allowed on the site include: business and professional offices; cafés and restaurants (excluding drive-in/drive-through restaurants); personal-service establishments; and retail stores.

“As a result of the applicant-led consultation, we have made some changes to the permitted uses,” Kathleen Stevens, city heritage planning analyst, said previously. “So we have added a provision to the personal service establishment to exclude dry-cleaning, electrical appliance repair shops and launderettes. As well, for retail stores we have added a provision to exclude convenience stores that are open past 10 p.m. or before 7 a.m.”

As I waded through the letters submitted to the City of New Westminster, I came across an interesting counterpoint to the concerns of a few people worried about the future use of the building.

“First, and likely most obvious, why would a business open up in a community, if the community deems it undesirable? How successful would this business be?” says one letter. “Not very. Second, why do we assume something bad will happen? Why can’t we assume a positive future? Many Queen’s Park residents I’ve talked to would love to have a little coffee shop in our community where we could meet for nice conversation over a morning croissant. Third, due to practical constraints (for example, the HVAC capacity), putting in anything but a small café is simply not possible. In order to do so, the owner would need to return to the City for a revised HRA. Fourth, and most important, why should this generation of home owners dictate to the next what they can or can’t have? Is the future generation not capable of making decisions for themselves? Or do we get to ‘rule from the grave’ and tell them what’s best for them? … Let’s not dictate to the next generation of residents what they can or can’t have. They will be perfectly capable of managing their own affairs when we are all long gone.”

It’s an excellent point. I hope more people will throw their support behind this proposal. This business owner is pledging to make this property so much better than it is today. It would be a shame to derail that.

- With additional reporting by Theresa McManus

500
Here’s where people who are homeless in New West can enjoy a hot shower and get a comfort kit
262
Luxurious residences are setting a new standard of living in Langley
216
UPDATE: Here's where you could be able to buy cannabis in New West
115
New West now grappling with second big COVID-19 outbreak
65
Canadians are outraged by the new egg patty in Tim Hortons' breakfast sandwiches