Student representatives will be leading the effort to find out how New Westminster Secondary School students feel about the presence of police in schools.
Nov 26, 2020 2:07 PM By: Julie Maclellan 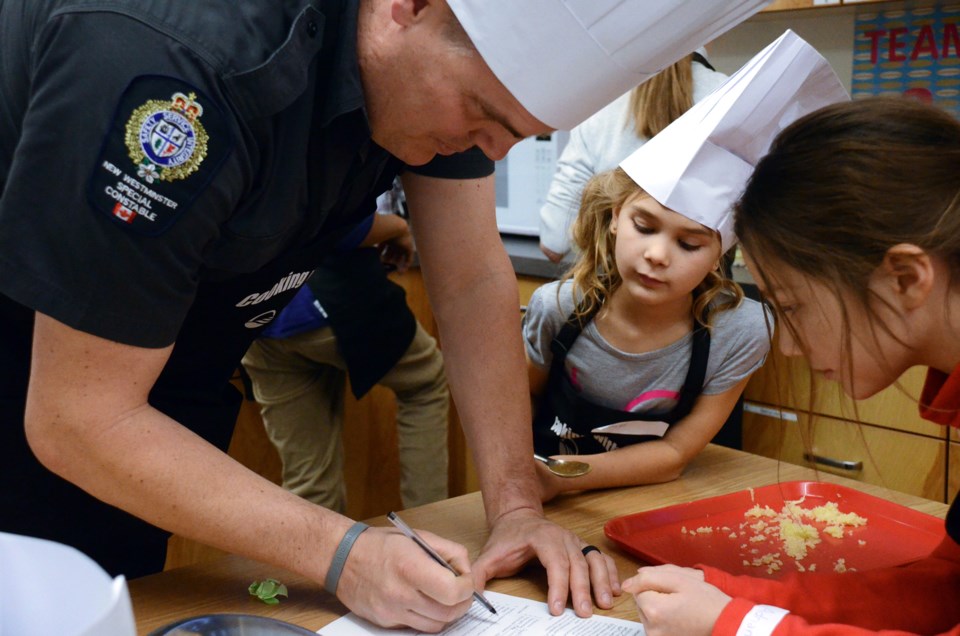 A Cooking With Cops program in 2018 was one of many initiatives undertaken by the police liaison officers in New Westminster schools. The liaison officer program is now under review.Record files

Student representatives will be leading the effort to find out how New Westminster Secondary School students feel about the presence of police in schools.

The school district is reviewing the future of the child and youth liaison officer program that has run in a longstanding partnership with the New Westminster Police Department.The future of that partnership is now up in the air against the global backdrop of protest in the wake of killings of Black and Indigenous people during encounters with police.

The district has committed to review the issue through a “trauma-informed lens,” keeping in mind that the presence of police can be a source of trauma for BIPOC (Black, Indigenous, people of colour) students and staff.

In the past, there have been three child and youth liaison officers in the school district: one serving the district’s 11 elementary and middle schools, one at NWSS, and a community-based officer who works with the district’s alternate programs and provides extra after-hours support. The positions are all paid for by the police department, and the three officers have been temporarily reassigned to other duties while the school district considers the future of the liaison program.

At the school board’s Nov. 17 education committee meeting, the board’s three Student Voice reps from NWSS reported they’ll be taking the lead on getting input from students.

“We are excited to play a role in gathering and providing feedback from the students at NWSS,” Anastasija Petrovic told trustees. “We recognize that many students do not know much, if anything, about this partnership with the New Westminster police.”

To that end, student Jeryca Hechanova noted, the students will be using a PowerPoint presentation put together by the district’s director of instruction, Maureen McRae-Stanger. They’ll take that presentation into classrooms themselves, where possible, or provide a recorded version for teachers to use if they don’t want in-person visits by students who aren’t in their cohort.

Students will be encouraged to direct their questions and comments to Student Voice reps.

The students will also use school announcements and the Student Voice Instagram account (@studentvoice_) to spread the word.

The Student Voice reps will also work on creating a survey to go out to students once they’ve had a chance to learn more about the program.

The student reps will then report back to the school board in January with results of the survey and more information about how NWSS students feel about the police liaison officer program.

Trustee Dee Beattie, who chairs the education committee, said the student perspective will be valuable in helping the district make its decision about the future of the program.

2422
Luxurious residences are setting a new standard of living in Langley
310
New West now grappling with second big COVID-19 outbreak
251
Opinion: This protest in front of NWSS against an affordable housing project is ridiculous
219
New West rapid access clinic opens as 'safe way to get sober'
198
UPDATE: Here's where you could be able to buy cannabis in New West