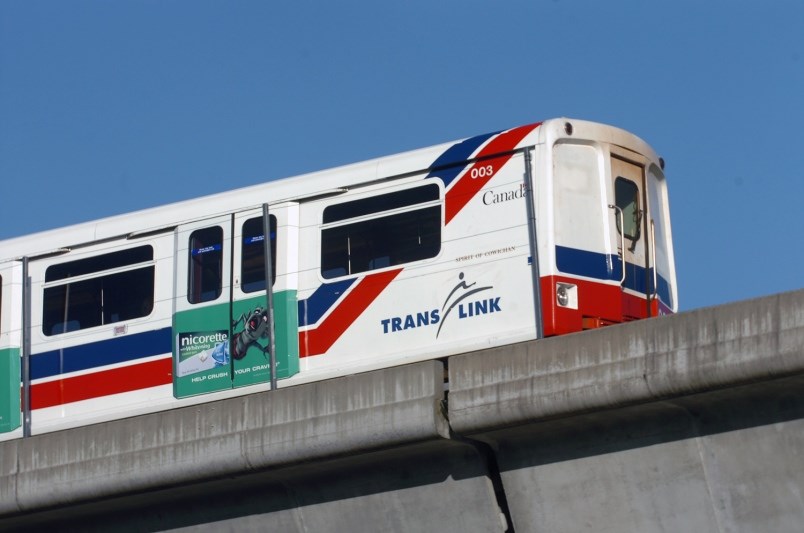 It could get a little noisy around two of the city’s SkyTrain station this month as projects aimed at ensuring the system is safe and reliable for years to come get underway.

New Westminster city council has granted an exemption to the city’s construction noise bylaw to allow work to be done at the 22nd Street SkyTrain station between 11 p.m. and 5 a.m. daily from June 11 to 26. The noise exemption will allow Smith Bros. & Wilson (B.C.) Ltd. to replace the station’s escalators.

A staff report states night shifts will be required to remove the existing escalator and hoist in the new one. Scaffolding assembly work will also be done in the station.

“This work cannot be completed while passengers are moving through the station,” said the report. “TransLink also requires this work to proceed during non-operational hours to assure passengers’ safety.”

According to the report, the Expo SkyTrain line has carried more than two million trains since it went into service in 1986. Staff say TransLink is making upgrades on 37 escalators in 13 SkyTrain stations along the Expo line, so they’re safe and reliable for years to come.

In addition to using construction methods that help minimize the noise impacts on neighbours, the contractor will also have a nighttime contact person available to respond to any calls from affected residents, said the staff report.

At the next stop along the Expo line, work will be taking place to replace track sections around New Westminster station. In a notice sent to residents around the station, TransLink stated the BC Rapid Transit Company would be replacing sections in and around that station this month, which would affect the areas around Plaza 88, Quayside Drive and Columbia Street.

“The work being performed is critical to the safe movement of trains,” said the notice. “This work must be conducted overnight while SkyTrain is not in active service, and will result in an increase in construction noise and possibly visual distractions as maintenance crews gradually work along the line. This will involve intermittent cutting and grinding of steel, diesel-powered work trains and the hoisting and placement of steel, including impact noise.”

The nighttime work around the New Westminster SkyTrain station is set to take place between 1 and 5 a.m., from June 15 to 20 and June 24 to 27.

Last June, many residents around New Westminster station complained about how noisy SkyTrain had become, with some describing it as deafening and ear-piercing. The noise prompted a resident to launch a Stop Excessive New West SkyTrain Noise! petition on change.org.

“Please help me! The eastbound SkyTrain heading into New West station has become unbearably loud!” read the petition. “We are calling on TransLink and New West city council to step up and repair this line ASAP! We're all home a lot more these days; New Westers deserve some respite from excessive noise.”

In response to the complaints, the BC Rapid Transit Company reported that rail-grinding in sections of New West, which had been delayed by COVID-19, would get underway and should help alleviate the noise. The company also noted that tracks between 22nd Street and New Westminster stations would be replaced as part of its maintenance and repair program, which would also help to mitigate noise levels.