<> Lacrosse, ringette and hockey players are urging city council to construct a third rink in the Royal City as soon as possible.
Mar 15, 2018 9:45 AM By: Theresa Mcmanus 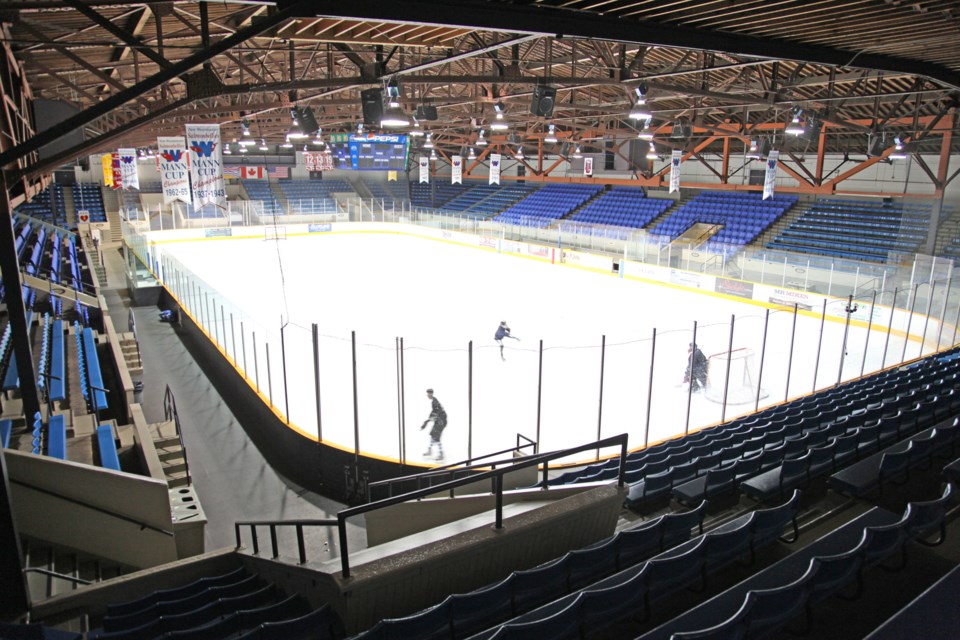 A trio of local youth appealed to city council to build a third ice sheet in New Westminster sooner rather than later. They say a third ice sheet will allow local sports teams to have better practice times, assist in player development, host more tournaments and will provide more time for public skating.
<> Lacrosse, ringette and hockey players are urging city council to construct a third rink in the Royal City as soon as possible.

Better practice and game times, more access to public skating and increased opportunities for local sports groups to host tournaments are cited as benefits associated with a new ice sheet in New West.

Sydney Christiansen, a 13-year-old ringette player in the Burnaby New Westminster Ringette Association, said a new arena would help attract more young athletes in New West to the sport of ringette. She said some ringette teams currently have to share ice for practices and some have to travel to Burnaby for practices, which can be problematic, especially for people who live in Queensborough.

“Most of our tryouts are in Burnaby. Most of our players have to skip school to get to them,” he said. “This could be resolved with a new arena in New Westminster.”

Nielsen said a third arena would provide more flexibility of floor times for practices and games and help the youngest lacrosse players whose games must be played at outdoor lacrosse boxes because of limited indoor time.

“In the spring, their games can be rained out mostly,” he told council. “A new arena would make sure these kids could play their whole year without having it rained out, so they could get their fair share of floor time and not always have to deal with the weather.”

Colburn Connelly, 13, said players with the New Westminster Minor Hockey Association would benefit from a third ice sheet as it would provide opportunities for more development camps in the summer. He noted New West kids currently compete against associations that have year-round access to ice, which is a disadvantage to local athletes.

“We could also have more time for delveopment throughout the whole year with more access to ice times,” he said. “If we have another sheet of ice, our practices might not have to be so early – like 5:30 a.m. That makes it really tough to go to school and be awake all day.”

Because of the limited ice time in New West, Connelly said some families have left the New Westminster league to join private hockey clubs so they have better practice times.

“Those are the lucky ones whose parents can afford it,” he said. “A lot of kids don’t even get the chance to play because their parents can’t make the schedule work or can’t afford to go to private clubs.”

Last fall, more than 500 people signed an online petition spearheaded by New West resident Daniel Fontaine calling on city council to put the issue of a new arena on the ballot in October’s civic election. Fontaine said local sports groups subsequently made a presentation to the parks and recreation committee, where they made a “compelling case” for why a new arena shouldn’t be buried in a 20-year planning document and should be accelerated.

With the city’s official community plan calling for thousands of new residents in the coming years, he said more and more people will be using the city’s arenas and recreation facilities.

“This will be adding even more pressure on the existing buildings that are running at maximum capacity,” he said. “In my opinion, you simply can’t add all these people without having a proper plan to ensure they have recreational facilities as well.”

Bernie Lehman, vice-president of New Westminster Minor Hockey Association, said there’s a “real need” for an expansion to Queen’s Park Arena. He’d like the city to accelerate the process and aim to develop a business plan for the project within the next 24 months, which would allow the city to approach senior levels of government to secure funding needed to get the project built.

Council referred the matter to staff for a report.

480
Here’s where people who are homeless in New West can enjoy a hot shower and get a comfort kit
461
Luxurious residences are setting a new standard of living in Langley
204
UPDATE: Here's where you could be able to buy cannabis in New West
138
New West now grappling with second big COVID-19 outbreak
66
Canadians are outraged by the new egg patty in Tim Hortons' breakfast sandwiches