Banner in Victoria Hill was part of a provincewide campaign to raise awareness of the need for economic justice as we emerge from the pandemic
May 4, 2021 9:07 AM By: Julie MacLellan 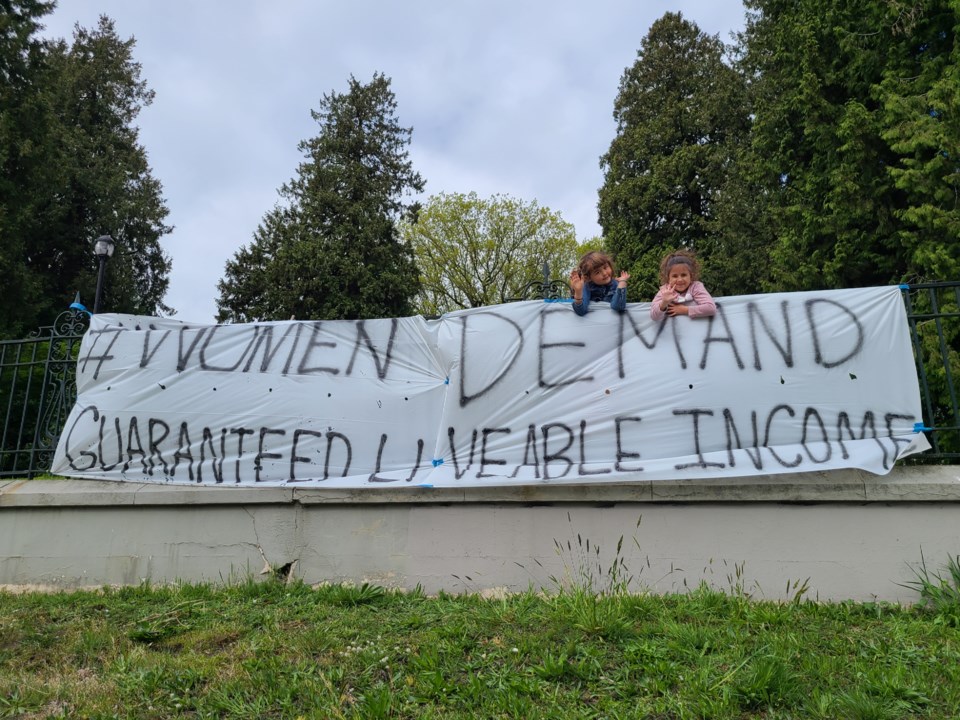 Members of the B.C. Women's Alliance (and their children) in New Westminster hung a banner in Victoria Hill as part of the group's campaign for a guaranteed livable income.contributed

Women in New Westminster are adding their voices to a B.C.-wide call for a guaranteed livable income.

The B.C. Women’s Alliance held a banner-drop campaign over the weekend in several B.C. communities, including New Westminster, Vancouver, Victoria, Nanaimo and Kelowna. Locally, members of the alliance – a coalition of feminist groups and individuals devoted to the cause of economic justice – hung a banner in the Victoria Hill neighbourhood saying “Women demand guaranteed liveable income.”

For local resident Sook Lee, the action was just one small way to raise awareness of the importance of a guaranteed livable income program.

“It’s a concept that everybody is valued to have a decent life; that as a citizen, each one of us existence matters, and we go from there, really,” she explained.

What the idea means is essentially what it sounds: that every single person should receive a basic, livable amount of money from the government.

The phrase is often used interchangeably with other terms such as “universal basic income” or “guaranteed annual income.” But a B.C. Women’s Alliance press release notes it’s seeking a specific type of program that would be available to all residents of Canada – regardless of citizenship, without a means test, without a job search requirement, and provided to individuals rather than to families, to ensure it would offer protection for women living in abusive relationships.

The Women’s Alliance also wants the income level to be set at a livable amount to allow people an “adequate and dignified” standard of living.

'WHAT IS THE VALUE OF HUMAN EXISTENCE?'

Lee, a child-care worker and the mother of a five-year-old, said the whole idea is based on the fact that every person’s life has worth and value.

“What is the value of human existence? Basically we have to start thinking about that,” she said. “I don’t want us to be manipulated by the materialistic, capitalistic system that always defeats us, that we always feel that we’re not good enough, that we don’t deserve a different life. Society will never become healthier that way.”

The way the world works now, she noted, many essential jobs – done largely by women – are undervalued.

“Most of the jobs that are related to cooking, cleaning, caregiving are absolutely vital and essential, but these do not make livable income, which eventually messes up society’s value system, which is harming our children's future,” she said.

Lee pointed out the COVID-19 pandemic has managed to shine a light on many of the inequities that exist in society – and that has been the “little silver lining” of the past year.

“Many people are noticing why guaranteed livable income can be our future,” she said.

The banner the local women had up for four or five hours over the weekend was just the beginning. Lee said they got some good reaction from drivers, who honked and waved their support as they passed by, and she’s hoping the movement can build from here.

Since the B.C. Women’s Alliance is unable to hold large events like rallies and protests, she said, they’ll be conducting much of their campaign on social media. Lee said they’ll be working on ways to get the message out to a wider audience – particularly to people who hear about concepts such as guaranteed income and who immediately think the idea smacks of “communism.”

“If the local news talks about it, then I think we can slowly tackle, little by little, some of their resentment or fear,” she said.