New Westminster city council wants to step on the gas in its efforts to reallocate roads to different uses.
May 22, 2020 11:33 AM By: Theresa Mcmanus 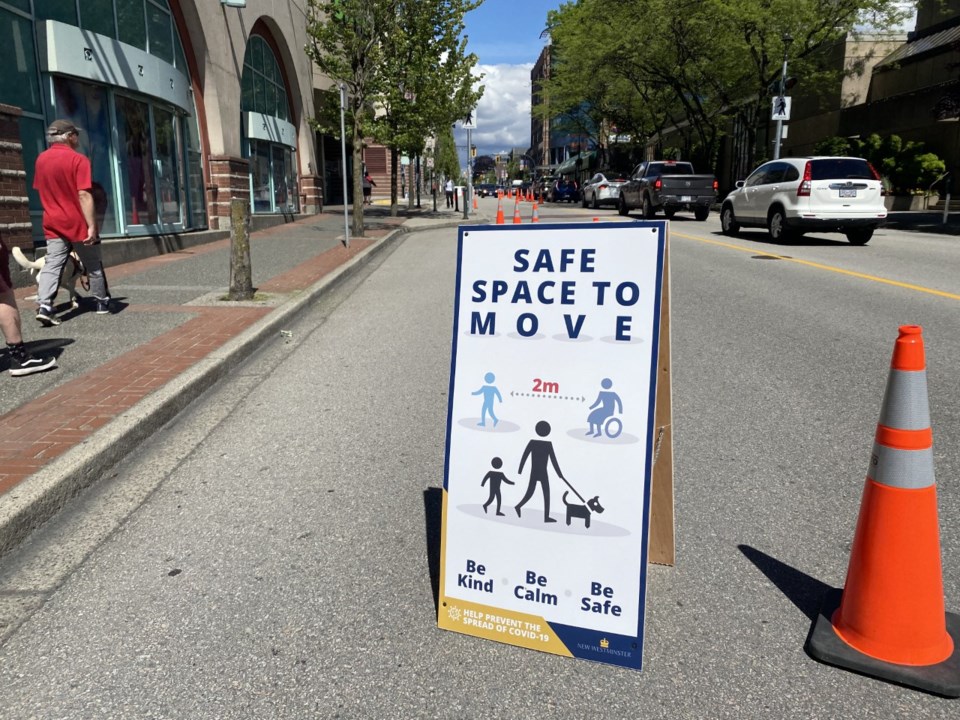 Sixth Avenue, between Eighth and Sixth streets, is one of the roads where the city has reallocated road space to pedestrians and cyclists as part of the city's response to COVID-19 physical distancing requirements.Theresa McManus

New Westminster city council wants to step on the gas in its efforts to reallocate roads to different uses.

While council had previously supported a plan to reallocate 10% of automobile-only space toward sustainable transportation and/or public gathering spaces by 2030, it recently approved a motion to make “rapid reallocation” of road space a priority work item. Council has directed the city’s transportation task force to apply temporary measures in 2020 and to accelerate the timeline toward the 10% space allocation.

Coun. Patrick Johnstone’s motion said COVID-19 physical distancing directives exposed the critical need for greater and more accessible pedestrian, active transportation and public gathering spaces in the city. He wants the city to move aggressively on this initiative and be “visionary and ambitious” while the opportunity exists.

“We have seen people interacting differently in our streets during the pandemic,” he said. “Commuter traffic is reduced, obviously, but people have also shifted to walking more. There are a lot more youth and families out on bikes. The way people shop, the way people assemble or use transit has changed.”

Although the city has moved quickly to support these types of changes in some locations in New West, Johnstone wants the city to move even faster. As the city has made changes to accommodate physical distancing, he said people have quickly filled those spaces.

“We have already set a goal for 2030 to reallocate 10% of road space as one of the bold steps. In light of the current events and how we are seeing space being used, the 2030 timeline for that no longer feels as bold as it did,” he said. “I think we can really show some leadership regionally and nationally by resetting the timeline for that work, to accelerate what we have been doing with temporary measures and aggressively doing that work in 2020, with the mind that these ideas can be made permanent as capital budgets and as recovery allows.”

Johnstone said the COVID-19 pandemic has given the city the opportunity to take rapid action.

“People need connections right now. I want to be able to support that in the summer of 2020 because we know it’s going to be a different thing in the summer of 2020,” he said. “Like everything else this crisis has pointed out, it hasn’t created a need, it’s just demonstrated to us that this need already exists in the community and has demonstrated the urgency of the need.”

At its May 11 meeting, council unanimously supported Johnstone’s “streets for people in 2020” motion.

The motion means staff don’t have to get council’s approval for making changes related to road reallocation, as it’s already a priority in the city’s master transportation plan.

“I think we need to do these temporary measures quickly and we need to free up their ability to get that work done. I suspect when they start coming back for more permanent measures, and if the costs come up, they are going to have to come back to us for spending,” Johnstone said. “But no – I want to give them the power to have the conversation with the community, to work with the business community to find out what works best to make the business districts work better, to talk to people in neighbourhoods about how they want to reallocate road space.”

Coun. Jaimie McEvoy said reallocation of roads to other uses is something that’s starting to happen all over the world in cities like Milan, Paris and Seattle.

“Initiating action and taking action on this quickly is a good thing,” he said.

Council members said the motion is consistent with the Seven Bold Steps on climate action approved by council in November 2019. One of those items was to create a "quality, people-centred public realm” by reallocating a minimum of 10% of today’s street spaces used by motor vehicles to sustainable transportation or public gathering.

“This is work that we really already intended to do. This is already inspirational on our part. I think what we have come up against now is that it is a time issue. I really think that this work needs to be done as quickly as possible,” said Coun. Mary Trentadue. “It serves a number of purposes. Helping restaurants that may need to open up patios. It helps residents in the area that need to get around. It really puts us on a path toward a new normal for public realm.”

Coun. Chuck Puchmayr supported the motion as he believes these initiatives allow people to feel comfortable when they are walking on sidewalks and provide them with an ability to physically distance from other pedestrians. He voiced concerns about potential safety issues for pedestrians and cyclists created by temporary measures, such as temporary traffic cones, and the need to engage with local businesses to ensure the changes don’t negatively impact them.

At its May 11 meeting, council also received a staff report outlining a number of initiatives that have been introduced or are in the works to provide opportunities for pedestrians to physically distance on local streets.

“It’s just not possible to socially distance walking on the street in many places,” said Cheryl Lewis in a press release. “Being able to walk along part of East Columbia is a good start, but taking social distancing seriously means walkers and wheelers need more support. There are far fewer vehicles on the road right now, so there is no reason to not turn that space over to pedestrians.”

1262
Luxurious residences are setting a new standard of living in Langley
442
Here’s where people who are homeless in New West can enjoy a hot shower and get a comfort kit
205
UPDATE: Here's where you could be able to buy cannabis in New West
179
New West now grappling with second big COVID-19 outbreak
66
Opinion: This protest in front of NWSS against an affordable housing project is ridiculous