The ink isn’t dry on the City of New Westminster’s official community plan and potential changes are already being pondered.
Sep 20, 2017 2:28 PM By: Theresa Mcmanus 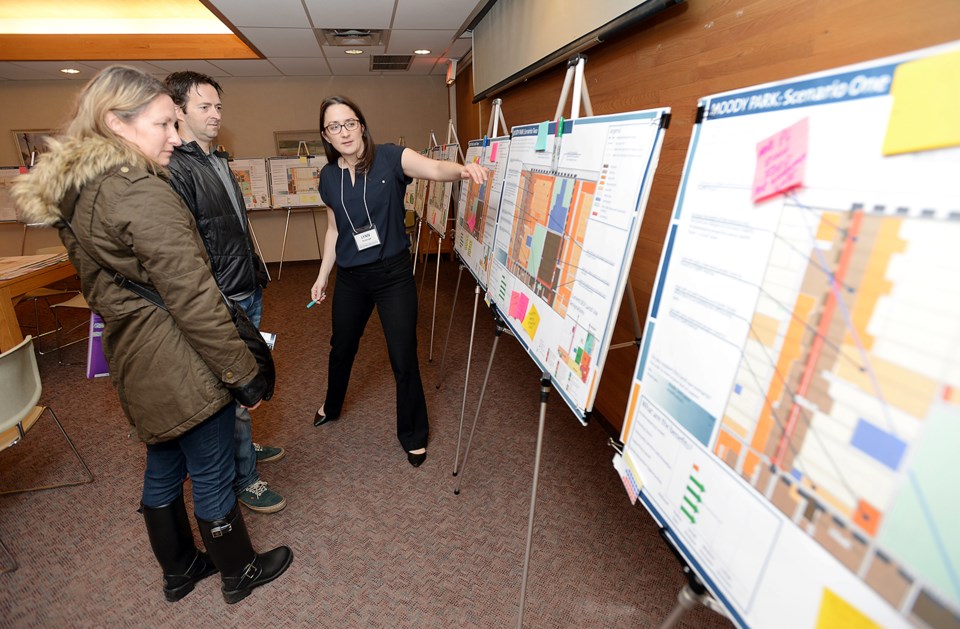 Lynn Roxburgh of the City of New Westminster talks to residents at an Our City workshop at the library during the official community plan process. Council has adopted the plan, which was three years in the making.

The ink isn’t dry on the City of New Westminster’s official community plan and potential changes are already being pondered.

“It’s really one of the most important planning documents a community has,” said Mayor Jonathan Cote. “It really is the roadmap or the guide that the city has on how it’s going to evolve into the future.”

Coun. Patrick Johnstone said staff did a “heroic job” of distilling 7,000 pages of documents, including studies and public feedback, into a cohesive plan that tackles a variety of policies, actions and land uses in New West. With some residents asking the city to do one thing and others seeking the opposite, he said it’s impossible for everyone to get exactly what they want in an OCP.

Coun. Chuck Puchmayr commended council for its ability to compromise, noting council members didn’t agree on all aspects of the plan.

"It was a lot of give and take,” he said. “That’s why some people may think we haven't gone far enough and others may think that we have gone too far.”

Some council members and residents would have preferred the OCP designate more areas of the city for ground-oriented housing forms such as townhouses and rowhouses. Residents of some areas of the city where that was proposed petitioned council to leave that out of the OCP.

“The plan definitely does identify some new areas in our city to really help try and encourage that type of development,” Cote said. “Having said that, I will be the first to recognize that, did we achieve as much as even myself personally might have hoped to have seen in terms of opening up new areas for that type of housing? No. I think we may have fallen a bit short in that regard.”

Cote said an official community plan is about trying to build consensus in the community.

“The OCP should not be about forcing down land-use designations on a significant majority of people in a neighbourhood who are not willing to go there,” he said. “Having said all of that, I think that conversation needs to continue. In my mind, that is an area where we may not have achieved as much as I'd hoped to and I'm hoping over the next while we can continue to have some conversations and find areas where can build that consensus in the community.”

That process will get underway sooner rather than later.

After unanimously approving third reading of the official community plan amendment bylaw, council voted five to two in favour of a motion put forward by Johnstone to direct staff to explore additional locations that could be designated as residential infill townhouse as part of a two-year townhouse and rowhouse monitoring program, and include the outcome in a proposed land-use designation map update at the conclusion of that program.

That’s good news to members of the Yes in New West coalition, who urged city hall to expand housing options in neighbourhoods across the city by allowing more row houses, townhouses and carriage and laneway houses.

At Monday’s public hearing, Brow of the Hill resident Brad Cavanagh said his neighbourhood has been an “experiment in gentle densification” for the past 40 years and demonstrates that single-family homes, townhouses, row houses and lowrise apartments can co-exist without negatively affecting the community. He’s disappointed that large portions of the city are untouched and reserved for single-family homes in the OCP.

“The OCP and the land-use map are going to form a vision of New Westminster, for what it will look like 40 years from now,” he said. “Forty years from now I wish that the rest of the city would be like Brow – a walkable, affordable and livable community, as well as welcoming to immigrants, younger families and low-income families. But unfortunately the OCP won’t allow that to happen for the majority of the city. I support the passage of the OCP bylaw but I hope that when rezoning requests cross your desk … over the coming years, you keep these three words in mind: Be like Brow.”

Nadine Nakagawa said she’s pleased that laneway and carriage housing are included in the plan, but doesn’t think the OCP went far enough in staking out areas for the missing middle – housing that fills the gap between condos and single family homes – particularly on non-arterial roads.

“What I would like to see the city do is to open up a process to review those areas within a reasonable amount of time, before the next official community plan process moves forward,” she said. “It seems to me that within two to three years would be an appropriate amount of time to address the fact that we do need be very proactive, aggressive and bold on housing, and make sure that this community stays livable.”

As part of the OCP, the city also initiated a rezoning bylaw amendment to support the implementation of laneway and carriage houses, which were the housing forms that were most supported during OCP consultation. Regulations will address things like density, parking and maximum building height.

“There are very specific regulations, as well as guidelines we have developed in order to ensure the laneway houses and carriage houses don’t negatively impact neighbours and the character of our neighbourhoods. We are interested in infill housing, but we are interested in doing it in a way that supports the character and livability of our neighbourhoods,” said Jackie Teed, the city’s acting director of development services. “Not every single property will be able to have a laneway house or carriage house, even if they are designated as such.”