New Westminster noticed an “instantaneous” increase in traffic after tolls increased on the Port Mann Bridge. That’s the view of acting mayor Lorrie Williams, who thought a police incident might be to blame for gridlock on the city streets on Monday.
Jan 9, 2014 10:07 AM By: Theresa Mcmanus 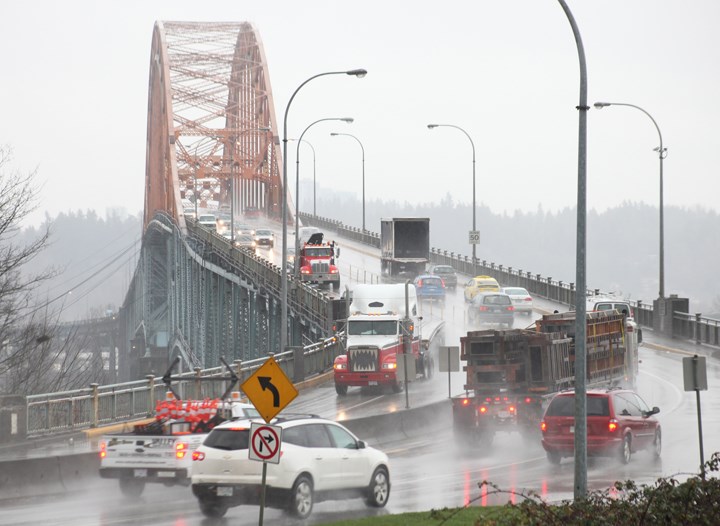 The Pattullo Bridge is once again open to four lanes of traffic, a month earlier than anticipated while it underwent $100 million in repairs.File photo/RECORD

New Westminster noticed an “instantaneous” increase in traffic after tolls increased on the Port Mann Bridge.

That’s the view of acting mayor Lorrie Williams, who thought a police incident might be to blame for gridlock on the city streets on Monday.

“On Monday when I left city hall, I thought there was an accident somewhere. There were cars coming down Sixth, Royal was packed, McBride was packed,” she told The Record. “It was everybody wanting to get onto the Pattullo.”

While there was an “instantaneous” increase of traffic on the Pattullo Bridge and New Westminster streets, Williams said it’s possible motorists will return to their regular routes. The introductory $1.50 tolls on the Port Mann Bridge doubled to $3 per trip for vehicles on Jan. 1.

“They might go back. There is always a little bit of to and fro. People have to decide whether they value time or money,” she said. “I think poor people are going to use the time up because they don’t have the money.”

Truck drivers don’t make a ton of money so it can be costly if they need to make a few crossings across the Fraser River, Williams said.

In October, council asked the province to immediately lower tolls for heavy trucks on the Port Mann Bridge to discourage the use of the Pattullo Bridge as a free alternative. Council also asked TransLink to: ban heavy trucks on the Pattullo Bridge, if the Pattullo Bridge continues to experience increased traffic volumes due to the diversionary effects of the Port Mann Bridge; approve an extension of the current heavy truck prohibition on Royal Avenue to 24 hours (other than for local deliveries); and establish regional tolling as a travel demand management measure for the Metro Vancouver area as an immediate priority.

While new businesses have opened in New Westminster that rely on trucks, including industrial sites in Queensborough, Williams doesn’t think development has contributed significantly to the dramatic increase in truck traffic in New Westminster.

“I think that’s a normal sort of development that happens. That’s normal business for any city. Every person who moves into the city contributes. That’s a natural increase that we expect to have with development,” she said. “I don’t want the unnatural one that’s caused by a toll bridge on the other side. It’s different because people who would normally use the Port Mann – if there was no toll we would not have this congestion. When I say unnatural, I mean it was caused by a certain event. Development is a natural phase of any city.”

Williams called TransLink earlier in the week to see if they had any statistics from Monday’s traffic counts on the Pattullo Bridge, but was told they weren’t available. She expects council to discuss the situation at its Jan. 13 meeting.

“This is New Westminster’s number one problem as identified by us and by the citizens,” she said. “I want the citizens to know that we are trying really hard to cooperate with people but we are certainly going to make sure that they understand what our position is. This is essential.”

Coun. Jonathan Cote told The Recordin December that he’d received statistics showing that traffic on the new Port Mann Bridge had decreased 10 to 13 per cent since a year earlier, and traffic had increased on the Pattullo Bridge. That followed statistics released by the city last fall that showed the average daily traffic volume on Royal Avenue has increased by five per cent, and the heavy truck volume had increased by 63 per cent, an increase the city said was partially due to the introduction of tolls on the Port Mann Bridge.

The increased traffic on Royal Avenue has alarmed residents of the Queen’s Park neighbourhood, who have written to B.C. Transportation Minister Todd Stone asking that the ban on heavy trucks on Royal Avenue be extended to 24 hours a day, from the current ban of 9 p.m. to 7 a.m.

David Brett, president of the residents’ association, recently took to the airwaves to chat about the “off the charts” increase of truck traffic seen in New Westminster since tolls were introduced on the new Port Mann Bridge.

Brett believes the increase in truck traffic on Royal Avenue is directly related to the tolls, as truck drivers aren’t keen on paying $9 each time they cross the Port Mann Bridge and have opted to take the free Pattullo Bridge.

Brett noted that a new elementary school is being built on Royal Avenue, and Douglas College and the existing John Robson are also located on the busy road. He said the residents’ association will continue to push for action to ensure livability and safety are protected.

“We think with reasonable lobbying, change is possible,” he said.

The Record could not reach Transportation Minister Todd Stone before press time.

Meanwhile, TransLink, New Westminster and Surrey will continue working on plans for a replacement Pattullo Bridge. In the first phase of the process, 25 options were whittled down to six, which will be presented to the public during Phase 2 of the public engagement process that’ scheduled for early 2014.
“We are open to a number of options. There is the four-lane rehabilitation, there is the four lane new, the three lane rehabilitation and then there is a six-laner,” Williams said. “We are open to some of those options and willing to discuss them with Surrey.”

While some Surrey councillors accused New Westminster of putting roadblocks to the process, Williams believes Surrey understands that New Westminster is taking the brunt of traffic increases caused by tolls on the Port Mann Bridge.

“I think Surrey and New Westminster have to stay on amicable terms and resolve this. I don’t think we should let the province pit municipalities against each other,” she said. “If we really play our cards right and talk to surrey and explain our position, and keep an open mind, I think we can come to a solution that makes everybody just a little bit miserable. That’s what compromise is.”